Image credit: Mary Schweitzer, Copyright 2005 AAAS. Adapted for use in accordance with the federal copyright (fair use) law.

Hardly a month passes without new reports of “soft tissue” discovered in fossils. Could this material last millions of years? We need to see what laboratory studies show us about tissue decay.

Just last year, I visited the Carnegie Museum of Natural History in Pittsburgh. As I entered the fossil section, I didn’t know whether to laugh or lament when I read a sign that said, “Fossils that are traces of prehistoric life have no original organic parts preserved.” Such mistaken statements appear throughout popular science media, so it’s no wonder few scientists know about or accept evidence of original tissues in fossils, and even fewer are looking for new evidence.

Of course, if fossils are traces of life that lived a million or more years ago, then we have no reason to believe original organic molecules should be preserved, let alone cells or whole tissues like blood vessels. But many fossils do have these stunning features.

Dr. Mary Schweitzer and her team caught the world’s attention with a Science paper in 2005 that described intact blood vessels and red blood cells in a T. rex bone. But in fact, secular scientists have been reporting them for decades in sometimes seldom-read technical literature. That museum placard is 100 percent wrong, and every Christian should understand why.

Decay Rates Under a Million Years

Two observations about fossils show why those who believe Noah’s Flood formed most fossils only thousands of years ago have a reasonable faith. The first observation concerns decay rates.

How long should we expect organic materials to last in sedimentary rock? We don’t have to guess, since scientists have supplied solid answers. Normally, scavengers, water, and microbes destroy whole carcasses after a few years at most, but what about animal remains buried in mud during Noah’s Flood that then dried into hardened sediments? Rapid burial kept scavengers from them, or we’d have no fossils. And rapid drying would limit microbe growth.

But nobody has yet discovered a natural process that would stop one remaining decay factor: chemistry. Scientists have conducted reliable, repeatable experiments that demonstrate the chemistry of decay at work in biomolecules, including bone collagen and DNA.

Collagen Survival Rates. Collagen is a tough, ropy protein found throughout bones, making them resilient and flexible. Oxygen and other chemicals react with collagen, whittling it into tiny molecules over time. How long does it last?

Experiments reveal that it depends on the temperature. Heat increases the number of collisions between atoms and thus the rate of destructive chemical reactions. Bone collagen is so tough that if held at a constant temperature of 45°F (7°C), it might last for several hundred thousand years, but no more than one million.1,2 These results assume optimum burial and preservation conditions. So, hard science confirms bone collagen could have lasted, even at warmer temperatures, for the 4,300 or so years since Noah’s Flood, but should not have lasted a million years.

So, even the oldest possible ages for these biochemicals keep them from lasting one million years, while showing they could last thousands of years. 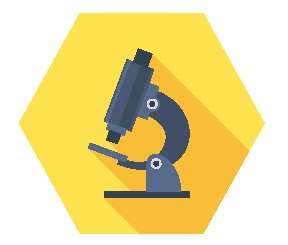 Scientists are doing lab experiments to see how long biological tissues and molecules can survive. So far, they have examined collagen and DNA. It’s nowhere close to 65 million years.

Researchers examined 158 Moa bones buried in New Zealand at different known times, over the past few centuries. These bones were preserved under similar conditions and temperatures. The researchers then compared how much mitochondrial DNA survived in each specimen. From this, they calculated the rate of decay. At this rate, DNA would no longer be detectable after 650,000 years.

Researchers placed bone fragments from modern cattle and humans into vials of distilled water. They kept a high temperature constant for 32 days. On a regular basis, they took samples to see how much of the collagen protein survived. From this, they calculated a rate of decay. This common protein might last several hundred thousand years, but no more than one million.

The most amazing report I read recently described tube worm fossils from pre-Cambrian rock layers, obtained from deep Siberian cores. Because of their intact and still-flexible proteins, I almost laughed out loud over their evolutionary age assignment of 551 million years.

Researchers have used a wide variety of techniques to detect these proteins. The ultimate test is molecular sequencing, and secular scientists determined the sequence of amino acids in the tyrannosaur and duckbill collagens. But they have also used other very reliable techniques to inexpensively identify many kinds of proteins in Mesozoic fossils.6 Often, the proteins have lost much of their original integrity, but retain enough for clear identification. Like castle ruins, we expect these proteins to have crumbled only partly over several thousand years, but after a million years these proteins should have lost all their structure. Yet they persist, pointing to thousands of years.

Scientists have even reported that some fossils have DNA, not just collagen and other proteins. However, microbes or human handlers can contaminate the specimens. When scientists find DNA sequences that do not match known contaminants, they gain more confidence that they have original DNA from the fossil. Often, secular scientists assign ages to DNA-containing fossils—for example, amber-encased insects—much older than DNA’s shelf life.

So we see that two fossil observations confirm biblical creation: biomaterials have a shelf-life significantly shorter than a million years, and certain fossils from around the world still contain original biomaterials. But we need to heed a couple of cautions before we hit the streets with this news.

First, we have to read reports carefully. Phrases like “remarkable preservation” and “soft tissue preservation” do not always mean original tissue or molecules. They often refer either to fossils that merely preserve the shape of a tissue—like dinosaur skin that has been replaced by minerals (mineralized)—or to impressions like footprints. Minerals can enter a body and last much longer than its original biochemicals, so, while interesting, these finds do not enter our main discussion.

Second, we should limit our focus to biochemicals that have measured decay rates, like collagen and DNA. Several reports mention original hemoglobin (blood proteins) and pigments (like squid ink), but we don’t yet know their survival times with experimental certainty.

With these cautions in mind, believers in creation should graciously challenge others to explain how original tissue fossils can exist in an old earth. If honest, they may eventually admit that recent creation, as recorded in God’s Word, provides the most scientifically solid answer.

Original Tissue Throughout the Fossil Record… 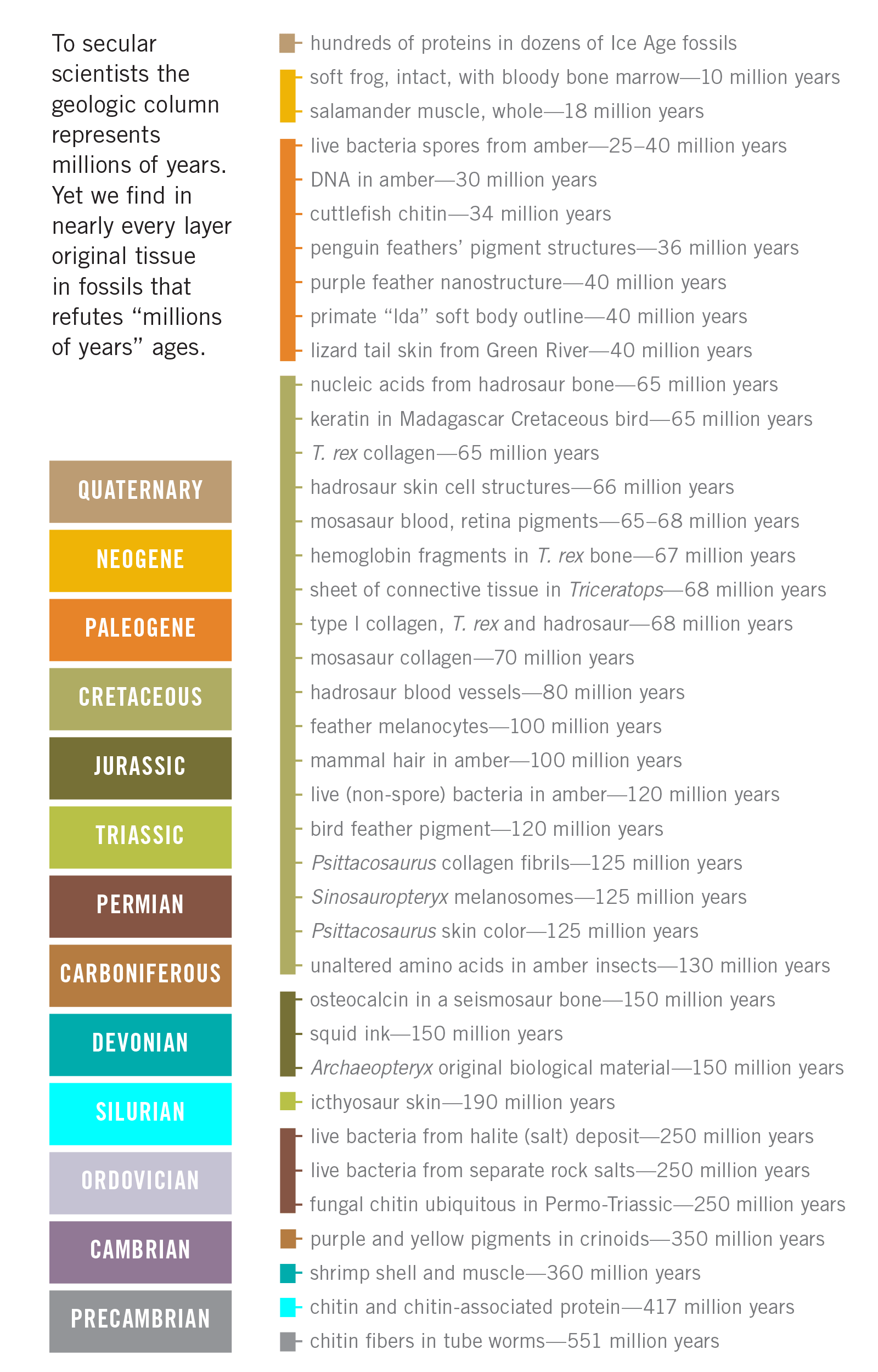 * See www.icr.org/soft-tissue-list for the original secular technical paper references. Used by permission from the Institute for Creation Research with updates.

Watch an excerpt from the video What You Haven’t Been Told About Dinosaurs, by Brian Thomas. This video is available for purchase at http://store.icr.org/What-You-Havent-Been-Told-About-Dinosaurs-DVD/productinfo/DWYHBTAD/

Brian Thomas is the science writer at the Institute for Creation Research, where he contributes and edits articles and speaks on creation issues. He is the author of Dinosaurs and the Bible and a contributor to Guide to Creation Basics, Creation Basics & Beyond, and Guide to Dinosaurs.
Previous Article Why Do Atheists Care? Next Article Blubber Gloves