Why Is There a “Decline in LGBT Acceptance”? 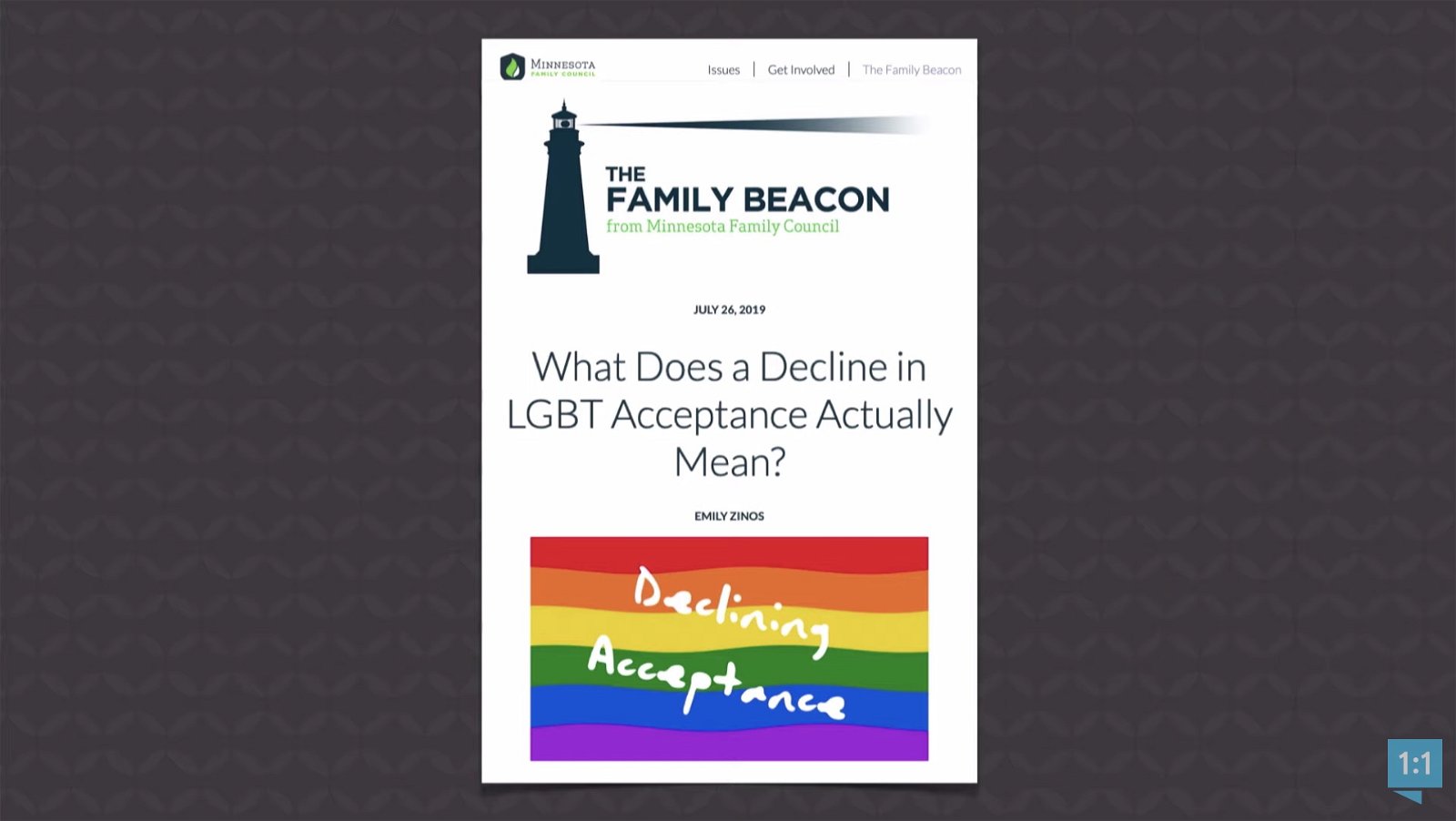 The LGBT media monitoring organization, GLAAD, releases the results of their “Accelerating Acceptance Survey” every year, since 2016. The results from the 2018 survey were somewhat surprising—there has been a significant drop in LGBT “allies” according to the survey results, particularly among 18–34-year-olds.

Why the drop, especially among the demographic that is supposed to be the most LGBT-accepting generation?

GLAAD defines an “ally” as someone who says they are “very” or “somewhat” comfortable with seven scenarios they are presented with. Those scenarios include situations such as “finding out their child had a lesson on LGBT history in school, learning a family is LGBT, and discovering that their child’s teacher is LGBT.” In 2016, 62% of men aged 18–34 were allies, but by 2018, that number dropped to just 35%. Likewise, in 2016, 65% of women in the same age group identified as “allies,” as opposed to 52% in 2018. Why the drop, especially among the demographic that is supposed to be the most LGBT-accepting generation?

Well, GLAAD tries to explain it by appealing to politics and the current presidential administration as well as “the newness factor” with identities such as genderqueer, pansexual, or non-binary. But the Minnesota Family Council has a different take on it.

The GLAAD survey has been capturing American attitudes towards LGBT identified people since 2016, one year after same sex marriage was rendered legal by the Supreme Court. That was the year that the LGBT lobby went into full T mode, funneling all their money and organizing clout into transgender “inclusion”. The same old equal rights slogans were put right back to work, this time with the aim of cajoling everyone into believing it’s a form of bigotry to accurately recognize a person’s sex. But as ‘Love is Love’ faded into ‘Transwomen are Women’, something else happened: consequences. Lots and lots of them.

There was the Obama bathroom mandate, when many of us came to realize that “inclusion” meant boys in our daughters’ locker rooms. Then we learned that “diversity” requires that library toddler story time be led by drag queens. And who could forget the headlines exclaiming “sex is a spectrum” and “men can get pregnant, too!” Privacy, decency, and science cut down in one fell swoop.

In fact, I could do a quick Google search and turn up thousands of incidents that should shake anyone out of their diversity and inclusion slumber: there is the Canadian man pretending he’s a woman who has filed human rights complaints against a number of female estheticians who (rightly!) refuse to wax his genitalia, there’s the California gender specialist who is referring thirteen year old girls for “gender affirming” double mastectomies, the lone lesbian on the Baltimore City LGBT commission who lost her post after stating that male rapists should never be housed in women’s prisons, the French teacher from Virginia who was fired for refusing to use ‘preferred pronouns’, and the Samoan female powerlifter who lost her bid for Gold in the 2019 Pacific Games when a man identifying as a woman predictably bested her lift. Sappy slogans can’t stand up to real consequences that, in some cases, have utterly destroyed people’s lives. The fact is, it’s becoming harder and harder to make that case that the LGBT movement is about equal rights and easier and easier to point out how this movement erodes rights. If actions speak louder than activism, then it’s obvious that this movement could care less about women and girls, about kids making it to healthy adulthood, or about our cherished First Amendment freedoms. (emphasis theirs)

We certainly are seeing the aggressive LGBT lobby infringing on the First Amendment freedoms of Americans (really, we’re seeing this all around the world). Those freedoms will continue to erode in the name of “tolerance” and “acceptance” if we don’t stand up and fight for them. In fact we see increasing intolerance from those who claim tolerance!

LGBT activists are selling the lie to hundreds of thousands of individuals, that if they embrace their “true” identity as a homosexual or transgender person (or whatever their feelings tell them), they will find true freedom. But Jesus tells us,

If you abide in my word, you are truly my disciples, and you will know the truth, and the truth will set you free…Truly, truly, I say to you, everyone who practices sin is a slave to sin…So if the Son sets you free, you will be free indeed. (John 8:31–32, 34, 36)

Living the LGBT lifestyle leads to slavery to sin—it doesn’t give the freedom that it promises! Freedom (for any person) is only found in repentance and putting your faith and trust in Christ alone for salvation. Then the Son, Jesus Christ, will set you free from the yoke of slavery and give you new and eternal life. That’s the message this culture desperately needs to hear!

This item was discussed Monday on Answers News with cohosts Dr. Georgia Purdom, Avery Foley, and Bryan Osborne. Answers News is our weekly news program filmed live before a studio audience here at the Creation Museum and broadcast on my Facebook page and the Answers in Genesis Facebook page. We also covered the following topics:

Watch the entire episode of Answers News for August 5, 2019.