1.2 Tools for Inquiry: Logic and Observation

Science is both a fabulous body of knowledge and a fantastic method of investigation. Most people just assume evolution can be studied scientifically—but not creation. According to a slogan popular these days, “Evolution is science, and creation is religion,” and that’s supposed to stop the discussion even before it starts. Let’s start, then, with the most basic question of all: Is it really possible to talk honestly and fairly about scientific evidence of creation??

For many people, that question is a major stumbling block. Some even use it as an excuse to throw creation out of the courtroom or classroom without even hearing the evidence, but nothing is really easier for scientists and just “ordinary people” than finding and recognizing evidence of creation.

To illustrate, let me borrow your imagination for a moment. Imagine that you are walking along a creek on a lazy summer afternoon, idly kicking at the pebbles along the bank. Occasionally you reach down to pick up a pebble that has an unusual shape. One pebble reminds you of a cowboy boot (Figure 1). As you roll the pebble around in your hand, you notice that the softer parts of the rock are more worn away than the harder parts, and that lines of wear follow lines of weakness in the rock. Despite some appearance of design, the boot shape of the tumbled pebble is clearly the result of time, chance, and the processes of weathering and erosion.

But then your eye spots an arrowhead lying among the pebbles (Figure 1). Immediately it stands out as diﬀerent. In the arrowhead, chip marks cut through the hard and soft parts of the rock equally, and the chip lines go both with and across lines of weakness in the rock. In the arrowhead, we see matter shaped and molded according to a plan that gives the rocky material a special purpose.

You have just done what many people dismiss as impossible. In comparing the pebble and arrowhead, you were easily able to recognize evidence of creation. I am speaking here only of human creation, of course. The arrowhead might have been carved by one of my ancestors (a Cherokee), for example, but the same approach can be used even when we don’t know who or what the creative agent might have been.1

What does it take to recognize evidence of creation? Just the ordinary tools of science: logic and observation.

Using your knowledge of erosional processes and your observations of hard and soft rock, you were able to distinguish a result of time and chance (the tumbled pebble) from an object created with plan and purpose (the arrowhead). If we had found such objects as arrowheads on Mars, all scientists would have recognized them immediately as the products of creation, even though in that case we would have no idea who made them or how. The late Carl Sagan, the evolutionist of Cosmos television fame, spent millions of dollars listening for signals from outer space, because he knew full well that we can tell the diﬀerence between wave patterns produced by time and chance and those sent with design and purpose. 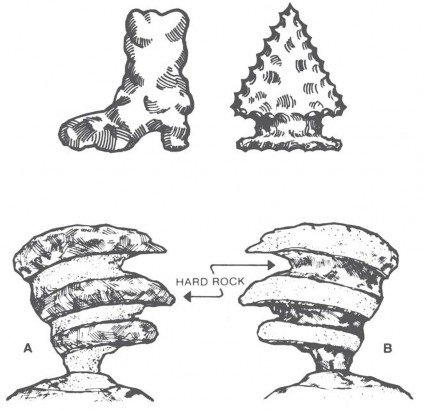 Figure 1. Try your hand at recognizing scientific evidence of creation. Both rock formations above resemble a man’s head, but examine the relationship between hard and soft rock in each. Which (A or B) is more likely the result, like the tumbled pebble, of time and chance acting on the properties of hard and soft rock? Which is more likely the result, like the arrowhead, of plan and purpose? Can you recognize evidence of creation without seeing either the creator or the creative act?

I was in a friendly mini-debate at a California college when the evolutionist interrupted me: “But creation can’t be scientific. Science deals only with things you can see and touch. Take energy, for example . . . .” Then he stopped. “Whoops! Made a mistake, didn’t I?” I hastened to agree. He, his students, and I all knew that there are forms of energy, like gravity, that you can’t see or touch or put in a bottle. Yet you know “gravity” is there (whatever it is!) because you can see the eﬀects it has on matter. Similarly, God is a Spirit and can’t be seen—but you can see His eﬀects on matter. Even the Bible tells us that “the invisible things of God are clearly seen in all the things that have been made” (Rom. 1:20).

Although the pebble and the arrowhead are made of the same substance, they reflect two radically diﬀerent kinds of order. The tumbled pebble has the kind of order that results from time and chance operating through weathering and erosion on the inherent properties of matter. Those same factors will eventually destroy not only the pebble, but also the arrowhead, which has the kind of order clearly brought into being by plan and purpose, mind acting on matter.

In a way, the tumbled pebble represents the idea of evolution. As I once believed and taught, evolutionists believe that life itself is the result, like the tumbled pebble, of time, chance, and the inherent properties of matter. The arrowhead represents the creation idea, that living systems have irreducible properties of organization that were produced, like the arrowhead, by plan, purpose, and special acts of creation.

In our daily experience, all of us can diﬀerentiate these two kinds of order (inherent and “exherent” ). On the basis of logic and observation, for example, we recognize that wind-worn rock formations are the products of time, chance, and the inherent properties of matter. Those same techniques (logical inference from scientific observations) convince us that pottery fragments and rock carvings must be the products of plan, purpose, and acts of creation giving matter irreducible properties of organization.

Let’s suppose for a moment you are willing to agree, even tentatively and reluctantly, that “creation” (the model, the process, and the products) can be studied scientifically. Does that mean you have to be (shudder) a “creationist?” Not at all! Indeed, there were a couple of teachers at a California university convinced, as I am, that creationist ideas can be tested scientifically—but they thought that scientific tests proved them false! So we can agree ahead of time that both classic models of origin, creation and evolution, can be compared on the basis of scientific merit, but that still leaves it up to me to convince you that the bulk of scientific evidence available supports the Bible, not evolution.

So far, we’ve only agreed to discuss, to “reason together.” Now, let’s apply these ordinary scientific techniques to the study of living systems. When it comes to the origin of life, which view is the more logical inference from our scientific observations? Time, chance, and the evolution of matter? Or plan, purpose, and special acts of creation?

Previous Chapter 1.1 Where to Begin? Next Chapter 1.3 The Origin of Life: DNA and Protein