The Ultimate Proof of Creation

A debate over biblical creation is a lot like a debate over the existence of air. Can you imagine two people debating whether or not air exists? 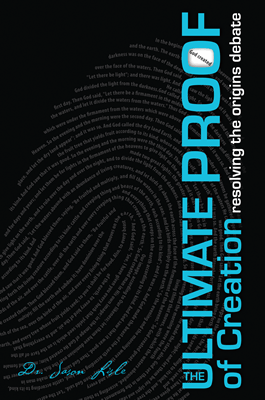 The Ultimate Proof of Creation by astrophysicist and apologist Dr. Jason Lisle is a completely new, 21st-century guide to defending the Christian faith, emphasizing the Genesis account of creation.

A debate over biblical creation is a lot like a debate over the existence of air. Can you imagine two people debating whether or not air exists? What would the critic of air say?

The three paragraphs above are an excerpt from my latest book, The Ultimate Proof of Creation (with foreword by Ken Ham, Answers in Genesis president). With the arguments presented in this new book, I demonstrate that biblical creation absolutely must be true because it is a prerequisite for knowledge and science. That is, if creation were not true, science (or knowledge about anything whatsoever) would be impossible. For example:

A lot of creationists are under the mistaken impression that evolutionists would believe in creation if they simply had more “evidence.” But the Bible tells us that people already have enough evidence of the God of creation. Romans 1:19–20 makes this clear: “because that which is known about God is evident within them; for God made it evident to them . . . so that they are without excuse.”

The unbeliever already “knows” God, but has suppressed what he knows to be true.

The key to defending the Christian faith—and sharing it with others—is to realize that the unbeliever already “knows” God, but has suppressed what he knows to be true. He denies with his lips what he knows in his heart. We can expose this suppressed knowledge of God by pointing out that the unbeliever unwittingly relies on creation principles when he attempts to reason or uses science or makes moral judgments.

Like the “critic of air,” the unbeliever relies on the God of creation to argue against the God of creation. While we cannot cover everything in a short article like this (such as how to counter possible criticisms of the above argument), The Ultimate Proof of Creation gives readers an absolutely irrefutable argument for the Christian worldview.

I believe this is one of the most important creationist books available today to teach people how to think biblically and how to argue logically in the defense of the Christian faith.

If only churches and families had taught this material to their congregations and children, there would have been much less compromise in the church. People would have been less likely to have been led astray by compromise and would have readily recognized the illogical arguments of believing in an old earth and other supposed “evidences”—ideas that have caused so many to question the authority of Scripture, leading many of them to leave the church.