Most museums and books portray lots of dinosaur scenes, separated by millions of years. But what if all these diverse environments existed at the same time? That’s what we’d expect to find if we look at the Bible’s history . . . and the world today!

Zebras grazing contentedly on the Serengeti plain, a jaguar lounging on an ombu tree, a herd of water buffalo wading across the Brahmaputra River. The more we learn about the world around us, the more we are struck by the bewildering variety of landscapes and living things, woven together into a singularly beautiful picture that points to the One who wove it.

As David looked around him, it is no wonder he was compelled to sing aloud, “The heavens declare the glory of God.” In fact, he said the whole of creation seems to be unceasingly shouting about God’s glory for everyone to hear (Psalm 19:1–6).

Before the Flood, Noah and the earth’s other inhabitants must have seen God’s glory, too. Seeing these wonders, Noah surely sang songs of praise to his Creator. But Noah’s world was lost under the waters of the worldwide Flood; and over time, those early landscapes and their inhabitants—including tyrannosaurs, sauropods, and stegosaurs—faded from memory.

Then, two centuries ago, a handful of curious fossil hunters began to unearth startling clues about a staggering variety of long-forgotten animals and plants that once populated the earth. These finds set off a mad quest to retell their stories, a furious hunt that has never died down.

The same fossils can be interpreted as three different dinosaur communities living at the same time just before the Flood but at different locations.

Based on their faulty assumption that present-day slow processes have always been at work, early biologists interpreted the fossils in Triassic, Jurassic, and Cretaceous rocks as a series of communities that lived during different eras, separated by long periods of time. They believed each community replaced a previous community that had gone extinct. Each new community spread over much of the world before it also went extinct, to be replaced by another community.

Modern creationists, on the other hand, accept the Bible’s straightforward record of history. God created every kind of living thing in six days—only a few thousand years ago—and later He destroyed the earth in a worldwide Flood. Based on these facts, the same fossils can be interpreted as three different dinosaur communities living at the same time just before the Flood but at different locations. These communities were buried in succession, as each was overrun by rising Flood waters.

What is the evidence that different environments existed at the same time? Perhaps a closer look at present-day environments would help.

Today we don’t find one big environment but many different environments, and sometimes they are very close to one another—even on the same mountain or island.

From Romans 1:20 we learn that the Creator made sure His “eternal power and Godhead” was clearly seen “since the creation of the world.” If the same Creator was on display in Noah’s day as today, we would expect to find familiar patterns in both worlds.

Everywhere we look, we see a pattern of immense diversity—and yet that variety is woven together into a tapestry of astonishing order and unity. Consider the immense variety of stars, planets, and atomic particles. Despite all this variety, they share many similarities and connections that we can readily discern.

Organisms are yet another example. God didn’t merely create a diverse array of organisms (bacteria, protists, algae, fungi, plants, and animals); He also created the potential for wide variety within each category, which remains orderly and understandable.

For example, among the plants we find tens of thousands of orchid species spread over the earth today, and among animals we find more than a quarter million beetle species. Despite all this variety, we don’t have a problem recognizing which plants are “orchids” or which animals are “beetles.”

The breadth of variety among organisms is far, far greater than can ever be explained by natural processes even after billions and billions of years of evolution,1 and the variety within each major group of organism is many times greater than is necessary for survival.2

To pack creation with such diversity requires careful design. To give all these organisms homes, God filled the earth with a variety of physical environments: some are of dirt, some of water, and others of air. Within each environment is more variety, including different temperatures, pressures, nutrients, and amounts of water. Then He designed organisms of different sizes, diets, and times of activity so that even more creatures could share the same environment.

The Creator has filled the earth with many different, wonderful environments, such as Africa’s Serengeti plain. Each has a unique combination of animals and plants, which can be readily identified. Amazingly, the pre-Flood world appears to have had a similar varienty of environments . . . .

Despite the unity and diversity of modern ecosystems, remember that they are not the direct result of God’s original creation. The Flood’s judgment altered every environment of the original earth and exterminated most organisms. Yet God, the Creator and sustainer of the world (Colossians 1:17; Hebrews 1:3), oversaw the earth’s recovery following the Flood. Today’s abundant diversity and unity reflects that fact. God superintended as new physical environments were formed, as high diversity of organisms was generated anew, and as animals and plants settled in their proper environments.

If God restored the post-Flood world with such a variety of environments, then it would not be surprising if He placed at least as much variety in the pre-Flood world. But what would the unity and diversity of His original creation have looked like?

Evidence of the original variety appears to have survived the destruction and mixing of the global Flood. For instance, we have found fossils of over 17,000 trilobite species (an extinct crab-like creature with an outer skeleton) and about 2,500 nautiloid species (squid-like creatures in a shell; only the Nautilus survives).

The variations among plant species also indicate that they grew in a wide variety of climates. Variations in growth rings indicate climates ranging from cool temperate to tropical.3

The strange assortment of plants and animals indicates that some pre-Flood ecosystems were unlike anything we find today and did not survive the judgment of the Flood. This includes the trilobites’ various seafloor homes and perhaps a unique “forest” of hollow plants that once floated on the ocean (similar to quaking bogs today).4

Some other groups of creatures still have surviving representatives, but they are no longer as diverse or common as they were before the Flood. Examples include the Nautilus (nautiloids), lamp shells (brachiopods), sea lilies (crinoids), and large lobe-finned fish (coelacanths).

The loss of all this variety indicates that the diversity of the original creation—that which God directly created—was even greater than what we see in the present.

A unique combination of plants and animal fossils is found in the Jurassic rock layers of the Morrison Formation (Dinosaur National Monument). They appear to represent a complete environment, like the Serengeti plain. If so, then this may be just one of many ecosystems that filled Noah’s world.

Animals and Plants in the Jurassic Environment 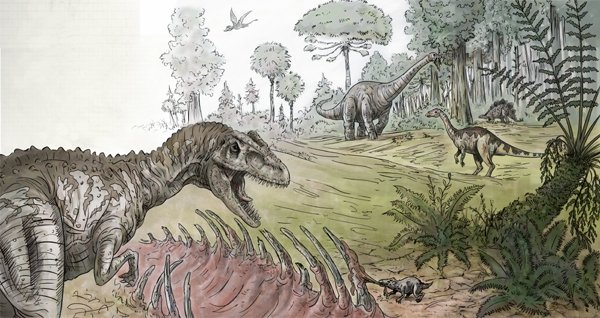 What About the Dinosaurs?

So what about dinosaurs? Based on the fossils found so far, they were a rather diverse group in pre-Flood times but now are extinct. The actual diversity was likely to have been even greater, since some organisms may not have left any fossils.

Dinosaurs didn’t live alone. A full set of plants, dinosaurs, and other animals are found in Triassic sediments. These fossils are distinct from those found in Jurassic rocks, and both are distinct from the organisms buried in Cretaceous rocks. So it appears that dinosaurs lived in a minimum of three ecosystems specifically designed for them.

You can easily see these distinctions when you compare the finds at two famous fossil locales. First is the famous “fossil wall” at Dinosaur National Monument in Colorado. Second is the source of most T. rex specimens: the Hell Creek Formation of Montana, Wyoming, and South Dakota.

Consider how similar these pre-Flood locales are to just one modern ecosystem—grasslands. Each has herbaceous plants, bushes, and trees. Each has plants for dry areas, wet areas, sun, and shade. Each has many tiny mammal herbivores, massive herb grazers (such as Triceratops and rhinoceros), long-necked tree grazers (such as sauropods and giraffes), meat-eaters (such as Allosaurus, Tyrannosaurus, and lions), and flying animals (pterosaurs and birds).

This is the kind of awesome similarity and variety we might expect if the same God who created the world continues to superintend the world so that His “eternal power and Godhead” are on display for all to see.

The combination of plants and animals in the Cretaceous rock layers of the Hell Creek Formation (Western U.S.) is very different from those in Jurassic rocks. Why? They may represent a completely different environment during Noah’s day. Both environments were then buried and preserved by the global Flood.

Animals and Plants in the Cretaceous Environment 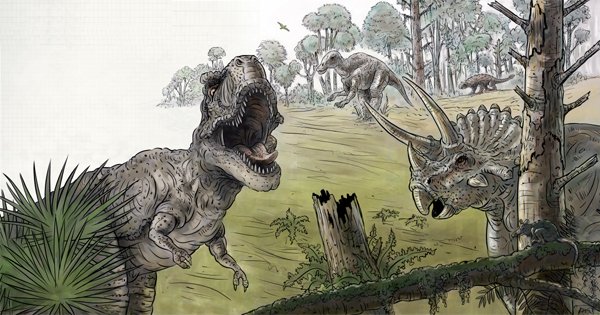 Dr. Kurt Wise earned his PhD in paleontology from Harvard University and has published numerous articles on biblical geology. He has also written the book Faith, Form, and Time. He is now the director of the Creation Research Center at Truett-McConnell College.
Previous Article Hypsilophodon—Least but Not Last Next Article Dragon Legends—Truths Behind the Tales