Dragon Legends—Truths Behind the Tales

Dragons appear again and again in the records of cultures around the world, as well as in their art and pottery.

In the book of Job, God describes a behemoth and a fire-breathing leviathan (Job 40:15–24; 41:1–34). These creatures are unlike anything we find today. Is it possible these dragons refer to dinosaurs and other reptile-like creatures of the air and sea?

Dragons appear again and again in the records of cultures around the world, as well as in their art and pottery. The similarities are hints that many accounts may be based on actual encounters with these creatures—dinosaurs and other reptiles which God created on day five and six (Genesis 1:20–25) and which survived the Flood aboard Noah’s Ark (Genesis 6:19).

Dragons may not be around today for the same reasons that other animals go extinct—changes in environment, food issues, hunting by man. Let’s face it, most legends end with a dragon’s death. But their memory lives on. 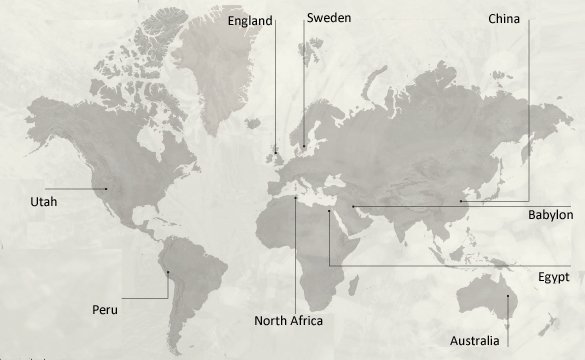 In the far north of Queensland, Australia, Aborigines from the Kuku Yalanji tribe described and painted a sea and lake monster that looked surprisingly like a plesiosaur.

Babylon is the heart of early civilization after the Flood. A famous entrance called the Ishtar Gate was built by Nebuchadnezzar II (a powerful ruler during the Israelites’ Babylonian exile). This gate displays a reptilian creature with four legs, standing upright on its hips like a dinosaur.

Chinese dragons, well-known throughout the world, even appear on China’s twelve-year calendar cycle. Eleven of these animals are common today (dog, rat, monkey, etc.), so why assume that the twelfth (a dragon) was mythological? The Travels of Marco Polo describes some of these long and lanky “serpents,” which included short legs and claws. He claimed the Chinese would use special methods to kill these dragons. Some of the dragons’ body parts were used for medicinal purposes, and others were eaten as a delicacy.

Herodotus, an ancient Greek writer, records in The Histories, “There is a place in Arabia [modern Egypt], situated very near the city of Buto, to which I went, on hearing of some winged serpents; and when I arrived there, I saw bones and spines of serpents, in such quantities as it would be impossible to describe. The form of the serpent is like that of the water snake; but he has wings without feathers, and as like as possible to the wings of a bat.”

Bishop Bell, who died in 1496, is buried in the foundation of the famous Carlisle Cathedral. The ornate brass engravings around the grave show several animals, some of which appear to be dinosaurs, like a long-neck sauropod and a horned ceratopsian.

The Roman historian Cassius Dio recounted how a Roman army once killed a dragon. The original fragment from Book 11 of his Roman History, now lost, was repeated by John of Damascus (AD ~676–749), in his book On Dragons and Ghosts: “One day, when Regulus, a Roman consul, was fighting against Carthage, a dragon suddenly crept up and settled behind the wall of the Roman army. The Romans killed it by order of Regulus, skinned it and sent the hide to the Roman senate. When the dragon’s hide, as Dio says, was measured by order of the senate, it happened to be, amazingly, one hundred and twenty feet long, and the thickness was fitting to the length.”

The Anglo-Saxon epic poem Beowulf describes three encounters Beowulf, king of the Geats (Gothenburg, Sweden, today), has with three creatures. The last one, encountered in Sweden, is a fiery flying serpent that lives underground and comes out only at certain times. The injuries from this battle lead to Beowulf’s death.

Peru is known for dragon and dinosaur-like creatures in their pottery and other artifacts. For example, the Museum of the Nation displays a dragon-like dinosaur on a piece of pottery attributed to the Moche culture (AD 400–1100).

Several petroglyphs (etchings in stone) resemble air or land dragons. A pictograph in San Rafael Swell is of something similar to a Pteranodon or Pterodactyl. One in Natural Bridges National Monument looks rather similar to a sauropod.

Bodie Hodge has earned both his undergraduate and masters degrees from Southern Illinois at Carbondale in mechanical engineering. Since joining Answers in Genesis, Bodie has contributed to several books, including Dragons: Legends and Lore of Dinosaurs.
Previous Article Noah’s World—Same Time, Different Place Next Article The Mysterious Spleen