The words dinosaur and ice just don’t seem to go together. Dinosaurs and forests, yes. But not dinosaurs and ice. Yet the discovery of dinosaur fossils in Antarctica forces us to ask what extreme changes caused heat-loving dinosaurs to wind up on this ice-covered continent.

I had the privilege of hunting dinosaur fossils in the Arctic Circle of Alaska. Even in the summer months, it could get very cold. As miserable as I sometimes felt, however, I can’t imagine the challenges of those who dig fossils on the opposite side of the world—Antarctica.

Winds there blow 200 miles per hour (322 km/h), and temperatures regularly dip to -40°F (-40°C). In fact, the continent of Antarctica, situated over the South Pole, is the coldest, windiest, and driest place on earth.

Yet a few hardy people have braved this forbidding land to look for fossils, and their findings are astonishing.

A Land of Mystery

Antarctica is a continent full of mystery and extremes. It is truly a desert, with less interior precipitation than the Sahara Desert. Yet ice is piled up to 3 miles (4.8 km) deep. Antarctica’s very existence was only a rumor until the first ships sighted the mainland in 1820.

Somehow dinosaurs that once roamed in vast forests ended up in this bitterly cold, sterile land of ice and snow. How could this be?

Bundle up. There is only a very short window of opportunity to hunt for fossils. Our dinosaur hunt starts in the month of January, which is the Antarctic summer. The places to search are the coastal islands and exposed mountains.

The fossils on wind-swept mountains are especially challenging to retrieve. It’s hard just climbing there, let alone prying out the heavy rocks and lugging them back to base. Removing specimens from the ice and rock requires chisels, jackhammers, and rock saws.

So far, eight dinosaur species have been found. The first was Antarctopelta, meaning “Antarctic shield.” Discovered in 1986 among rocks assigned to the Upper Cretaceous, this find took scientists several field seasons to collect because of the difficult weather. 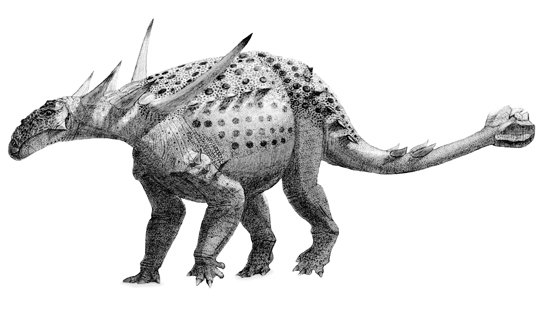 Antarctopelta was a medium-sized ankylosaur, about 13 feet (4 m) in length. Illustration by Mike Belknap

Antarctopelta was a medium-sized ankylosaur, about 13 feet (4 m) in length. Though the skeleton was in poor condition because of exposure to the elements, we still can see what type of animal it was. Ankylosaurs were plant-eaters with armored plates.

In 1991 a research team found another dinosaur in a Jurassic rock layer. Most of this specimen’s bones were found together, as they were in life, and about 7 feet (2 m) away was a fossilized tree trunk. This dinosaur’s name, Cryolophosaurus, means “coldcrested lizard.” Approximately 20–26 feet (6–8 m) long, this massive creature must have required a hefty diet. 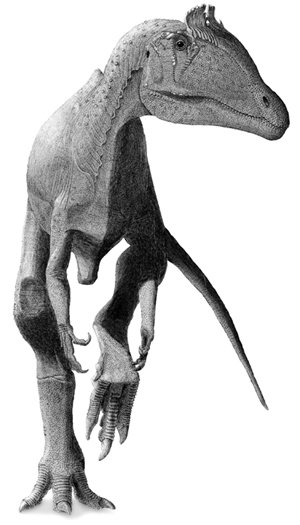 Members of the same 1990–91 expedition also collected partial remains of another Jurassic creature called Glacialisaurus, meaning “frozen lizard.” The entire dinosaur must have been 20–25 feet (6–8 m) long and weighed an estimated 4–6 tons. This is tentatively identified as a plant-eating, longnecked dinosaur, or sauropodomorph. Again, this was a big eater.

Since these discoveries, a few other dinosaur fossils have been found, including a tooth of a hadrosaur (duckbill dinosaur) unearthed on Vega Island off the Antarctic Peninsula. Although not dinosaurs, large sea reptiles, called plesiosaurs and mosasaurs, have also been found in abundance.

What did all these dinosaurs eat? Modern Antarctica has no trees or bushes, but in the dinosaurs’ rock layers we find lots of fossilized spores, ferns, pines, mosses, ginkgoes, and cycads. These plants obviously required temperatures much different from today’s temperatures.

Analysis of tree rings indicates that the trees enjoyed a more temperate climate, nothing like the polar regions today. For instance, the rings are ten times wider than those found in the trees of modern polar regions, and the fossilized trees did not have any “frost rings.”1

How did all these fossilized ferns and dinosaur fossils wind up in such a different climate as the Antarctica of today?

First Steps to Solving the Mystery

God provides many clues to help us understand earth history. The Bible is the infallible foundation for all understanding. From Genesis 1 we know that every “kind” of land animal, including dinosaurs, was created on Day Six of the Creation Week, and we know from Genesis 7 that all the air-breathing land animals perished during the global Flood, except for those aboard Noah’s Ark. With this foundation and framework, we can begin to make sense of the clues in our modern world.

Obviously something dramatic happened to the dinosaurs. Since the global Flood is the most dramatic event in earth history, that’s the natural place to start our investigation.

I asked geologist Andrew Snelling to help me explain how dinosaur fossils could have ended up in Antarctica.

First, were these dinosaurs buried before the Flood, during the Flood, or afterward?

Well, the Antarctic dinosaurs are found in the same Jurassic and Cretaceous rock layers that appear on other continents, indicating a Flood deposit. Anything that is buried in thick, uniform sediment layers spread across whole continents seems likely to be a Flood deposit.2

Second question: If Antarctica’s dinosaurs and plants were buried as a result of the Flood, did these creatures originally live at this location, or did raging Flood waters sweep them in from elsewhere?

From studies of how water transports sediment today, we might assume that the Flood buried creatures close to where they lived. Otherwise, if they were carried in the Flood’s waters too far, all the rock debris and sediments would have pulverized any trilobites, shells, corals, and other fragile parts. We would not expect to find all the amazing fossils preserved in Flood-deposited rock layers.

The Flood waters transported sediments huge distances before depositing them in layers.

Furthermore, there is good reason to believe that the currents moved east to west.3 So no matter how long larger animals remained afloat in the Flood waters before being buried, it appears that the dinosaurs were eventually buried in about the same latitude where they once lived.4

Once Nearer the Equator?

Most creation geologists agree that Antarctica has not always been located where it is today. It broke off from a supercontinent during the Flood and moved like other continental fragments to its current location.

There is good evidence that Antarctica was connected to Australia. For example, several geological details line up when these two continents are put back together. Yet the ocean floor between them does not have these features, indicating that the continents split apart.

If these continents were once joined but moved a great distance, Antarctica must have been closer to the equator, even if Australia moved farther, as the evidence is currently interpreted.

The mysteries of Antarctica challenge us to do more research on this mysterious continent and the fossils found there. The effects of the global Flood and the clues it provides will lead us to a better understanding of the pre- and post-Flood world of the Antarctic, and the dinosaurs that lived there.