Did this 7.5-mile-wide asteroid really kill off the dinosaurs as secular scientists claim?

On a clear night with a full moon, it’s easy to see the massive craters that scar the moon’s surface. Some are more than 50 miles (80 km) wide. One crater on the other side of the moon is large enough to swallow Great Britain! It’s hard to imagine the size of the space rocks that caused such havoc. Astronomers estimate they were over a mile (2 km) wide.

What would happen if a rock that size hit the earth?

The earth is not like the moon, which has no atmosphere to prevent meteorites from explosively impacting its surface. If you’ve ever watched the dark night sky for a long time, you’ve probably seen a “shooting star” streak across the sky. That’s really a meteorite, a relatively small chunk of rock broken off from an asteroid which came from beyond the orbit of Mars. The rock blazes a trail as it burns up in the atmosphere.

Until the mid-1900s, scientists were not accustomed to thinking about such catastrophic events on the earth because no one had found an impact crater here. But that changed after geologists recognized that the Barringer Crater near Flagstaff, Arizona, was an impact crater, not a volcanic explosion (see below). Since then, scientists have discovered more than 195 impact craters around the globe. 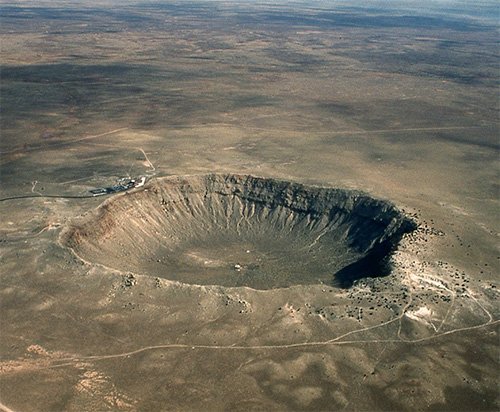 Arguably the best-preserved impact crater on earth is located east of Flagstaff, Arizona. This massive hole in the ground is about 3,900 feet (1200 m) wide and 570 feet (170 m) deep, with a rim that rises 148 feet (45 m) above the surrounding desert plains.

Initially ascribed to the actions of a volcano, it wasn’t until 1960 that Eugene Shoemaker used research gained from the impact of nuclear tests to confirm that this crater came from a meteorite impact. His key discovery was the presence of rare minerals along with structures in minerals and rocks found only in explosions much more intense than volcanoes can produce. And the shape and features of the crater matched lunar craters.

We now know that an iron meteorite, approximately 160 feet (50 m) across and weighing 300,000 tons (270,000 metric tons), must have caused this crater. It’s only a pebble compared to the one that caused the Chicxulub crater. But it still struck earth’s atmosphere with such force—equivalent to at least 2.5 megatons of TNT, or 150 times the force of the atomic bomb at Hiroshima—that most of the meteorite vaporized instantly. Only a few fragments survived.

Probably the most famous of these is the Chicxulub crater, on the coast of the Yucatán peninsula of Mexico. It’s not the largest crater, but it is the most interesting because it has been blamed for killing off the dinosaurs 66 million years ago. To piece together a minute-by-minute timeline of the asteroid impact and its effects, scientists just completed a $10 million offshore drilling project into the crater’s undersea rim. They published their findings last September, heralding a new understanding of the dinosaurs’ “final day.”

Secular scientists believe such meteorite impacts have been responsible for massive die-offs throughout earth history. How do we reconcile their findings with the Bible’s revelation about creation and a worldwide flood just a few thousand years ago?

First, let’s look at the Chicxulub crater. It is huge—125 miles (almost 200 km) wide. An asteroid passing through the atmosphere and creating such a massive hole on the earth’s surface would require a rock almost 7.5 miles (about 12 km) wide. 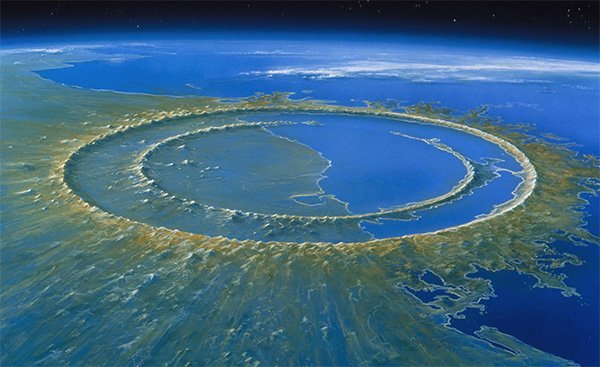 This artist’s depiction of the nearly 125-mile-wide Chicxulub crater site shows why the impact was so cataclysmic.

This impact crater has at least three concentric rings. Venus has a similar, though smaller, multi-ring crater that appears to show all the same structural elements. But Venus’ crater hasn’t been eroded like craters on earth.

The crater has all the hallmarks of a massive meteorite impact. The central or peak ring has an average diameter of about 50 miles (80 km). Geologists believe the initial impact blasted a plume of material into the upper atmosphere. Then as the crater collapsed inward, a central surge of molten rock shot upward to the height of Mt. Everest. The inner ring initially rose more than 1,000 feet (a few hundred meters) above the surrounding basin.

The Chicxulub crater’s structure and rock content have been surveyed using a range of tools, including seismic images that delineate the deep structure and shape. The crater is full of shattered rock fragments (breccias) and rocks that were melted by the heat of the impact, as geologists expected. Strange microscopic distortions in many of the mineral grains can only be produced by a seismic shock from a sudden impact of catastrophic proportions—like an asteroid impact. Indeed, the whole layer of basement rocks (the “roots” of the continents) in this region were fractured, shocked, and uplifted, consistent with the dynamic process of crater formation.

Even though some people have expressed skepticism, the available data clearly delineate a massive crater produced by a catastrophic asteroid impact at some time in the past.

Chicxulub and the Demise of the Dinosaurs

Okay, so it is clearly an impact crater. But why are so many scientists convinced that the impact produced the crater that killed the dinosaurs?

An asteroid 7.5 mile (12 km) wide would have blasted about 12,000 cubic miles (50,000 cubic km) of debris into the atmosphere. (By comparison, Mt. Fuji contains only about 24 cubic miles or 100 cubic km of rock material.) Some of this mangled mess would have fallen back to earth in a wide radius. As expected, a 295-foot (90 m) layer of mixed rock fragments was found 30 miles (50 km) beyond the crater’s edge. But that alone wouldn’t kill all the dinosaurs.

Most of the debris would have been fine dust and tiny, glassy particles. These would disperse widely in the atmosphere and scatter around the globe. The glassy particles and the asteroid-derived dust, including the rare metal iridium, would be easy to spot anywhere they settled.

Sure enough, glass ejecta spherules and dust—with a comparatively high iridium content matching the similar debris at Chicxulub—have been found in a thin layer in the rock record at diverse places around the globe, including Haiti, Spain, Denmark, Japan, New Zealand, and India, as well as in undersea sediment layers in the Atlantic and Pacific Oceans.

Not only was life threatened by all that dust and those tiny glass particles, but the Chicxulub impact would have blasted between 61 and 463 billion tons (between 6 x 1013 and 4.2 x 1014 kg) of sulfur into the atmosphere. The resultant acid rain would have disastrous environmental consequences.

The heat from the impact would also produce massive wildfires, even up to 900 miles (1500 km) away. Researchers found traces of charcoal that were washed into the crater region by the surging ocean water.

Further, tsunamis generated by the earthquake would have swept across the oceans and caused utter devastation wherever they crashed ashore. Such evidence has not only been found in nearby Mexico, but further afield in North Dakota, where fish were instantly buried and fossilized with the glass spherules from Chicxulub in their gills.

To make matters worse, it seems that at about the same time there were catastrophic volcanic eruptions in the Deccan region of India, which some suggest were perhaps triggered by the Chicxulub impact. Humongous volumes of basalt lavas spewed out at prodigious rates, along with even more sulfur and steam blasting into the atmosphere.

When scientists checked the radioactive decay products within the rock grains at all these sites and the Chicxulub crater, they yielded radiometric dates at around 66 million years, based on evolutionary assumptions about argon-argon dating. This fingerprint matches the dates found at the boundary between the Cretaceous (K) and Tertiary (T, now called the Paleogene [Pg]) in the rock record. Below that K/T (or K-Pg) boundary are found dinosaur fossils, but above it there are virtually none. No wonder secularists trumpet the Chicxulub impact event as causing the demise of the dinosaurs! 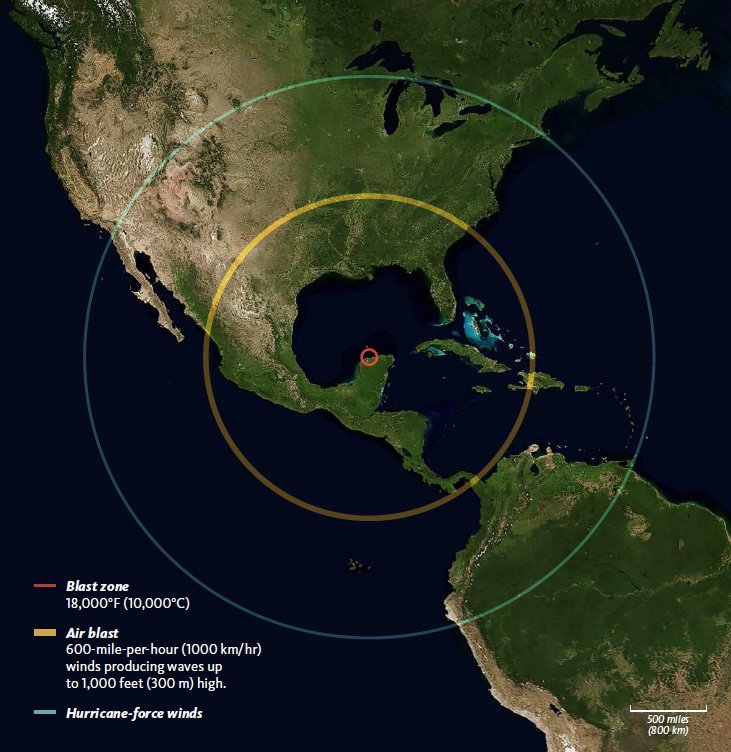 When the Chicxulub asteroid struck the earth, the heat incinerated all life in the immediate blast zone. An air blast then shredded everything within a 900-mile (1500 km) radius.

Over the next few days, glass “bullets” and radioactive dust rained down from the upper atmosphere all over the earth. Samples appear almost everywhere worldwide.

How then do we reconcile all this from the biblical perspective of earth history?

There’s no denying this Chicxulub impact occurred during the flood. Just as God rained down fire and brimstone on Sodom and Gomorrah in Abraham’s day, he was fully capable of raining meteorites and asteroids down on the earth as part of the flood judgment. After all, he had told Noah that he intended to destroy all flesh along with the earth (Genesis 6:13).

In fact, he may even have used an asteroid impact to trigger the waters of the flood (see “Did Meteors Trigger Noah’s Flood?,” Answers, Jan.–Mar. 2012). And many impact craters have been found at all different levels in the rock record of the flood, along with some fossilized meteorites. This “rain” of meteorites petered out in the early post-flood era, judging from the few fresh, small craters found on today’s land surface.

How could meteorites and asteroids strike land surfaces if the earth was covered with water during the flood? And how could the sediments in different layers already be hard?

First, global tides and huge tsunamis would cause the water level to fluctuate by hundreds of feet, periodically exposing land surfaces. Second, the sediment contained water with many dissolved chemicals that could quickly cement sediments. The sediments that the asteroid hit at Chicxulub were limestones, made out of the same lime we see in man-made concrete.

However, the Chicxulub impact didn’t cause the demise of the dinosaurs. Most animals died in the flood, but not all. The Genesis account repeatedly says two of every kind of land-dwelling, air-breathing creature were on the ark, sent there by God. So dinosaurs were preserved on the ark.

When stripped of the secular scientists’ dating assumptions about millions of years, the catastrophic Chicxulub impact and its global consequences are consistent with the cataclysmic flood.

Then they came off the ark into a totally changed world. They had to survive in harsh environmental conditions unlike the ones they knew before the flood, and they eventually died out.

When stripped of the secular scientists’ dating assumptions about millions of years, the catastrophic Chicxulub impact and its global consequences are consistent with the cataclysmic flood. The crater is a warning that the world could end at any time, but not as the secular world fears. We face a day of reckoning with God, just as they did in Noah’s day (Hebrews 9:27–28; 2 Peter 3:5–7). Only those who have received Jesus Christ as Savior will be saved. Are you ready?

Dr. Andrew A. Snelling holds a PhD in geology from the University of Sydney and has worked as a consultant research geologist in both Australia and America. Author of numerous scientific articles, Dr. Snelling is now director of research at Answers in Genesis–US.

Previous Article Teaching Evolution to the Next Generation Next Article Is AI Really a Threat?