How did T. rex walk? Scientists have studied its supposed modern cousin—the chicken—to find out. And since the chicken doesn’t have a bulky theropod tail, they decided—like the Grinch in need of a reindeer—to supply it with one. 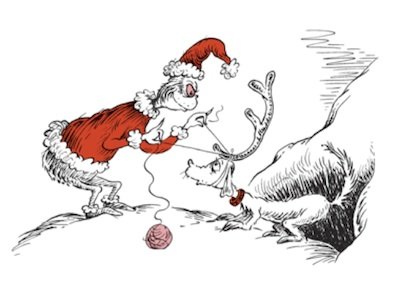 In the Dr. Seuss classic How the Grinch Stole Christmas, as the Grinch prepared to steal Christmas presents from Who-ville, he dressed up like Santa and said . . .

“‘All I need is a reindeer . . .’
The Grinch looked around.
But, since reindeer are scarce, there was none to be found.
Did that stop the old Grinch . . . ?
No! The Grinch simply said,
‘If I can’t find a reindeer, I’ll make one instead!’
So he called his dog, Max. Then he took some red thread
And he tied a big horn on the top of his head.”

Of course, dogs are not reindeer. Neither are chickens dinosaurs. To draw scientific conclusions about the way dinosaurs walked from living chickens despite their skeletal differences and on the basis of their supposed evolutionary relationship is an unreasonable, assumption-laden activity. Image and text from Theodor Seuss, How the Grinch Stole Christmas, New York: Random House, 1957.

To learn how theropods walked, scientists chose a living model to represent them. The quality of their conclusions depends upon the suitability of their model. Their choice, unfortunately, was based on the widespread claim that dinosaurs evolved into birds.

In “Walking Like Dinosaurs: Chickens with Artificial Tails Provide Clues about Non-Avian Theropod Locomotion,” researchers from the University of Chile and the University of Illinois at Chicago write, “By experimentally manipulating the location of the center of mass in living birds, it is possible to re-create limb posture and kinematics inferred for extinct bipedal dinosaurs.” From their “more nuanced understanding of the relationship between form and function in dinosaur evolution,” they also believe they know how bird legs evolved from theropod legs. 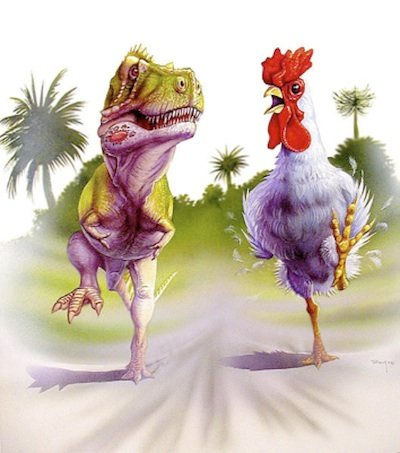 How can we learn about the biomechanics of T. rex’s walk? Ask a chicken! Believing birds are descended from dinosaurs, scientists velcroed wood-and-clay prostheses to chicken tails and filmed how they walked. Image: Painting courtesy of Luis Rey through Wikipedia Commons 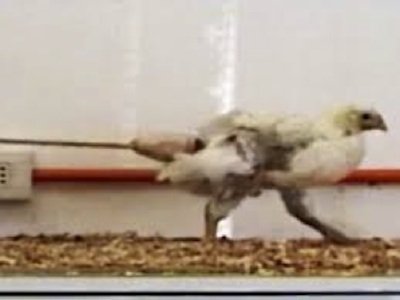 A chicken with an artificial tail walks across the screen. “With each waddle the experimental chickens offered clues to the form and function of theropods in dinosaur evolution,”1 according to an entertaining video describing the research. T. rex and chickens are both bipedal, but their skeletons differ greatly. Images: Chicken from B. Grossi et al., PLoS One through Slate

Tails were crafted from wooden sticks and modeling clay and then velcroed to an elastic coat. Chicks were raised wearing them. Tails matched body length and weighed 15% of each chicken’s body weight. This was the body:tail ratio that seemed to best mimic theropods. Tails were adjusted as the chickens grew. Each chicken’s altered center of gravity was estimated based on the center of gravity of the tail assembly.

One control group lived an unfettered life. A second control group wore lead-weighted coats that did not alter the birds’ natural balance point. Chickens were encouraged to exercise as much as possible.

When grown, these physically fit chickens were videoed as they walked and the footage analyzed. Birds ordinarily keep their femurs—which are inside their bodies—fairly horizontal, hunkering down a bit and walking from the knees using primarily the hamstring muscles. The researchers expected the altered center of gravity to prompt the birds to walk less hunched, to put more thigh movement into each step, and to thereby alter the position of the femur.

Angles between the various lower limb bones were measured and the relative orientation of the bones assessed from videos. Actually, this assessment was indirect, since a chicken’s femur and knee are hidden inside its body.

The tail-heavy chickens, compensating for their back-shifted center of gravity, leaned forward as they walked. They leaned forward enough that the femur was in a more vertical position. (See the illustration with color-coded bones. Weighted control birds also leaned forward, but the researchers judged it not enough to count.) “These results indicate a shift from the standard bird, knee-driven bipedal locomotion to a more hip-driven locomotion,” like that of dinosaurs, the researchers wrote. They suggest further research on hatchlings could reverse engineer the evolutionary process, demonstrating how theropods evolved into birds. 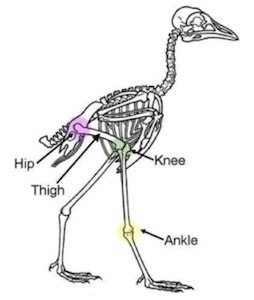 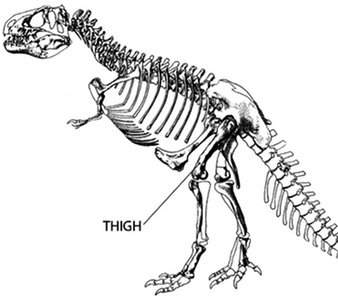 Comparing a bird skeleton (left) to the T. rex skeleton (right) reveals that the bird’s thigh bone is inside its body, but T. rex’s is not. The bird’s arrangement is necessary for it to be able to breathe. Oregon State University zoologists explained in a 2009 paper in the Journal of Morphology, “In the ostrich, the semihorizontal femoral complex is incorporated into the lateral body wall and helps prevent paradoxical ventilatory collapse of the large abdominal air sacs. No such collapse-preventing mechanism existed in Tyrannosaurus: during locomotion in theropods, the distal femur rotated freely and the femoral complex was not incorporated into the abdominal wall.”2  Images: Bird—Oregon State University through ScienceDaily3; Tyrannosaurus, Upper Cretaceous carnivorous dinosaur : (second communication). Bulletin of the AMNH ; v. 22, article 16. Osborn, Henry Fairfield, 1857-1935.; Brown, Barnum. L. M. Sterling, Illustrator.

These diagrams show how a chicken’s center of mass (COM) shifted backward when its “theropod-tail” was velcroed on. The “B” diagram shows the femur (f), knee (k), tibiotarsus (tt), ankle (a), and tarsometatarsus (tm) and the angles that were estimated from video footage of the chickens walking. Image: B. Grossi et al., PLoS One

To keep from falling on their backsides, these birds walked with their bodies and their thighs—anchored inside the body—tipped forward. The team concluded that evolution from dinosaurs to birds once produced the opposite effect, prompting evolving dinosaurs to crouch back more and begin walking from their knees-down using their hamstrings, until evolution eventually enclosed the bird thigh within the body. (This of course is presumably why fried chicken thighs are so much meatier than scrawny drumsticks. Thank you, evolution.) But in truth the ability of these chickens to shift their weight, adjust their walk, and keep their balance tells us nothing about their supposed evolutionary ancestors.

The chickens didn’t mind their coats and tails. “Indeed, subjects got used to the coats and artificial tails and behaved as normal.” But then, that’s not the point, is it? In fact, even the point that these birds were able to accommodate their hindmost handicap by walking in whatever way it took to keep their balance isn’t the point. 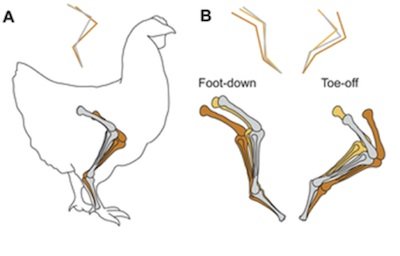 This diagram shows how chicken bone positions had to change to accommodate the altered center of gravity produced by the addition of a heavy tail. The unfettered chicken’s legs are shown in grey, and the legs of chickens with tails are shown in orange. The bones in yellow represent an additional set of controls in which the chickens wore weighted coats but no tails so that their center of gravity was not altered. The “foot-down” sketch shows the bone position as a bird put its foot down, and the “toe-off” sketch shows the bone positions as the bird pushes off the ground. Image: B. Grossi et al., PLoS One

A T. rex’s femur (thigh bone) was located beneath its trunk where it would have been able to move freely. A bird’s femur is inside its body, where it anchors air sacs essential to the bird’s unique respiratory process. The attachment keeps the bellows-like air sacs from collapsing until skeletal movements compress them to supply the bird with fresh air and oxygen.

“This is fundamental to bird physiology,” said Oregon State University zoologist Devon Quick. “The position of the thigh bone and muscles in birds is critical to their lung function, which in turn is what gives them enough lung capacity for flight.”4

Enjoy this sneak peek of next week’s After Eden that was inspired by this news story. An exciting ministry announcement inspired the After Eden cartoon this week: see the latest wonderful news on the Ark Encounter!

Believing birds co-evolved alongside dinosaurs rather than descending from them, John Ruben, coauthor of “Cardio-Pulmonary Anatomy in Theropod Dinosaurs: Implications From Extant Archosaurs” in the 2009 Journal of Morphology, said, “Birds are found earlier in the fossil record than the dinosaurs they are supposed to have descended from. That's a pretty serious problem, and there are other inconsistencies with the bird-from-dinosaur theories. But one of the primary reasons many scientists kept pointing to birds as having descended from dinosaurs was similarities in their lungs. However, theropod dinosaurs had a moving femur and therefore could not have had a lung that worked like that in birds. Their abdominal air sac, if they had one, would have collapsed. That undercuts a critical piece of supporting evidence for the dinosaur-bird link. A velociraptor did not just sprout feathers at some point and fly off into the sunset.”5

The problem with dissimilarity of skeletal structure even goes beyond the fact that birds and theropods kept their thigh bones in different places. These animals also pointed the opening of their pelvic bones in opposite directions. The theropod pelvis6 opens toward the front, as it does in modern reptiles and in mammals. The bird’s pubic opening is directed toward its back.

Pinning a tail on a chicken is certainly creative, but the starting assumption on which this experimental design is based—the idea that birds evolved from dinosaurs—fails on two counts.

First of all, animals reproduce and vary only within their created kinds. This biological observation is consistent with biblical history, for Genesis 1 says God created animals “after their kinds.” He made all kinds of fully functional birds just one day before He created the land animals, which would have included dinosaurs.

Second, anatomically, the walking-parts of the bird and theropod skeletons are not even similar. Far more than absence of a big tail separates birds from theropods. Video7 of a chicken strutting along wearing a coat and a tail resembling a plumber’s helper is fun to watch, but the science doesn’t stand serious scrutiny.

The Bible explains the origin of birds. It is no surprise that God’s design for birds includes a femur position that not only makes the bird’s uniquely efficient breathing system possible but also is positioned to allow a walking bird to keep its balance.