We are pleased to announce that enough money has been raised for the bond offering to allow the release of the funds to start construction of the Ark Encounter project in Williamstown, Kentucky.

Editor's note: The following is a news release, slightly adapted, that was distributed to the national media.

Watch the recording of Thursday evening’s live web stream featuring Ken Ham and others in the Ark project.

PETERSBURG, Ky., February 27, 2014—During tonight’s live web stream hosted by the president/CEO of Answers in Genesis, Ken Ham, AiG announced that enough money had been raised for the Ark Encounter bond offering to allow the release of the funds to start construction of the Ark project in Williamstown, Kentucky.

Under Ham’s direction, a full-scale 510-foot-long Noah’s Ark will be built as the featured attraction at the Ark Encounter. Research indicates that the Ark, located south of Cincinnati in Grant County, Kentucky will draw up to 2 million people in its first year. 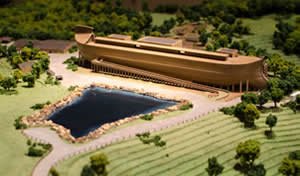 “We praise our Creator God for His blessings and for the incredible support we just witnessed from our generous supporters around the country,” declared Ham. “Yes, there have been days of nervous anticipation. Many challenges and road blocks came up as we worked through the stages of the bond offering leading up to the final bond delivery. From atheists registering for the bond offering and attempting to disrupt it, to secular bloggers and some reporters writing misleading and inaccurate articles about the bonds—the obstacles were numerous and disruptive.” 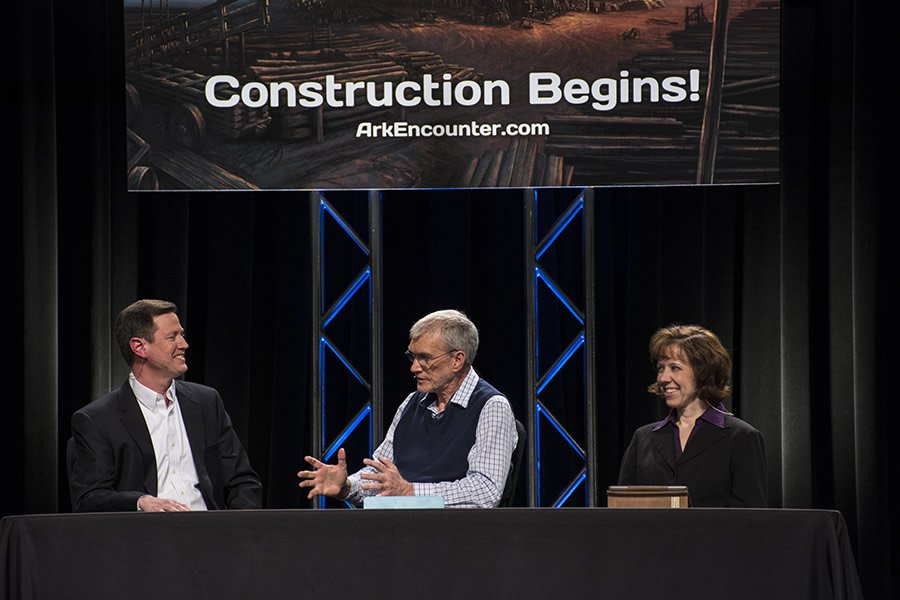 Ken Ham is flanked by Joe Boone and Dr. Georgia Purdom as they announced the successful closing of the Ark bond.

“It was a challenging time, one that on a human level required a miracle to overcome,” Ham added. “And God in His providence supplied our needs.”

The recent global media coverage of the Ark project and the soon-to-be-released film “Noah” starring Russell Crowe, plus Ham’s well-publicized February 4 debate with Bill Nye “The Science Guy” (over 7 million people watched live), have all helped bring the Ark Encounter to the world’s attention. Accordingly, Ham noted another aspect of God’s providence in the Ark project: “The date of my debate with Bill Nye had been on our calendar several months before we knew the final delivery date of the Ark bonds. But in God’s timing, not ours—and although the bond registration had already closed before February 4 and no more bonds could be purchased— the high-profile debate prompted some people who had registered for the bonds to make sure they followed through with submitting the necessary and sometimes complicated paperwork.”

At Thursday’s live web stream, Ken was joined by AiG scientist Dr. Georgia Purdom, VP of Advancement Joe Boone, Michael Zovath and Patrick Marsh of AiG’s Ark Encounter team, and the AiG board. The mayor of Williamstown, Rick Skinner, was on hand, as well as Darrel Link, the Judge-Executive of the county and Pastor Jeff Davenport of Calvary Baptist Church in northern Kentucky. 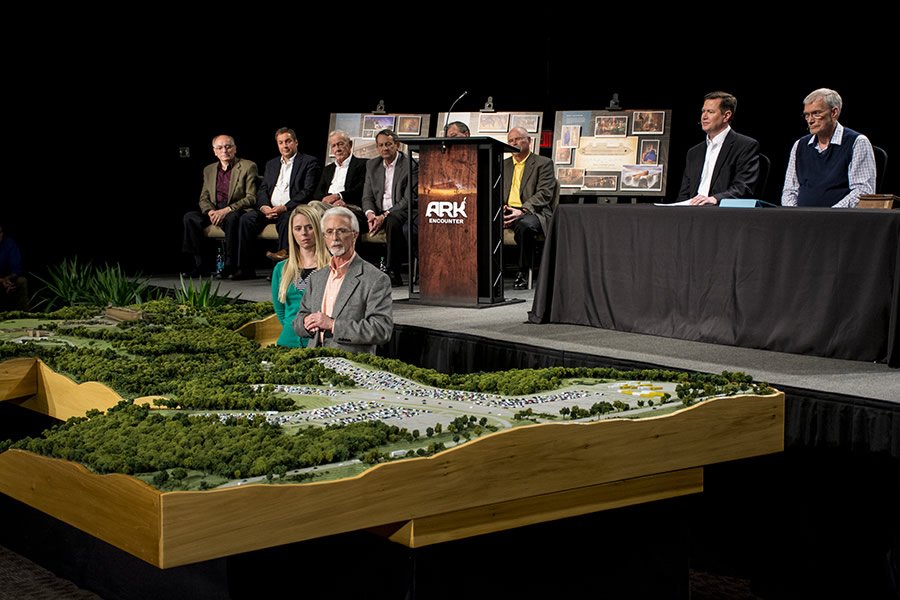 Patrick Marsh, lead designer for the Ark Encounter, and designer Kristen Andersen showed the scale model of the Ark property.

The Ark Encounter will be built on 800 acres off I-75 and in phases over many years. The Ark and other supporting elements will open during phase one. The first phase will cost an estimated $73 million.1 Several million dollars in donations and Ark boarding passes (memberships) had been raised prior to the bond offering, and most of that amount has already been used to pay for the Ark’s land, secure expensive permits and licenses, clear the property, draw architectural plans, design the exhibits, etc.

Meanwhile, with the Creation Museum in Petersburg, Ky. successfully drawing two million guests in six years, AiG is master-planning its expansion (40 miles from the Ark site) to handle an anticipated 50% attendance increase when the Ark opens.

“Even in a difficult economy, tens of thousands of supporters have made donations, purchased bonds, or bought Ark boarding passes in the past three years,” Ham observed. “With the funding in place to build the Ark, it is now our goal to raise an additional $15 million in donations to provide additional attractions like the special high-tech and interactive exhibits that guests have come to appreciate at our museum.”

With the completion of the bond offering, the next milestone is groundbreaking, for which a tentative date will be announced in a few weeks. 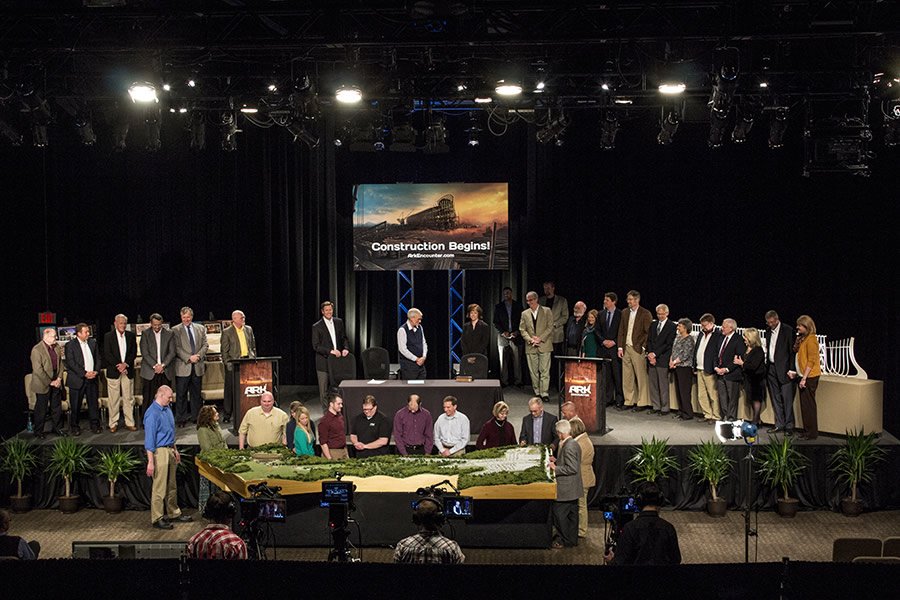 The online press conference concluded with AiG staff, board members, and guests gathering on the stage or near the Ark model inside the Creation Museum’s Legacy Hall.

Without government funding to build it, the Ark Encounter is a one-of-a-kind historical themed attraction. In an entertaining and educational way, it will present a number of themes from the Old Testament, centered on a wooden Ark.

Answers in Genesis is a biblical apologetics ministry. This month, more than two million people visited its website. AiG conducts about 300 teaching meetings each year, publishes the award-winning family magazine “Answers,” and produces the “Answers” radio program heard on more than 700 stations in the U.S.

To watch a recording of Thursday evening’s live web stream featuring Ken Ham and others in the Ark project, go to ArkEncounter.com.