by Dr. Elizabeth Mitchell on May 5, 2012
Featured in News to Know
Share:
Email Using:
Gmail Yahoo! Outlook Other

The Jurassic jawbone of a long extinct creature has resurfaced in China to add a new chapter to the saga of its mysterious identity.

In 1947 paleontologist Yang Zhongjian (aka C. C. Young) initially identified the “single badly damaged partial snout”1 as part of a sauropod dinosaur named Lufengosaurus magnus. However, Young later decided the bone belonged to a phytosaur, not a dinosaur, and renamed it Pachysuchus imperfectus. The fossil was found in early Jurassic deposits near Lufeng, China, but phytosaurs “should” have been extinct by the end of the Triassic era. Thus the fossil “became an important milestone for phytosaurs.” Somehow it then was misplaced in China’s Institute of Vertebrate Paleontology, hindering further investigation. Its recent re-discovery and re-re-identification as a dinosaur has restored the evolutionary version of dinosaur development to its commonly accepted form.

Phytosaurs, extinct crocodilian creatures distinguished by nasal openings set far back on the skull near the eyes, are currently classified as archosaurs, along with dinosaurs, crocodiles, and even birds. However, the archosaur branch containing phytosaurs has only one still-living representative, crocodiles. The phytosaurs are believed by evolutionists to be victims of the Permian-Triassic mass extinction, so discovery of Jurassic members is controversial. 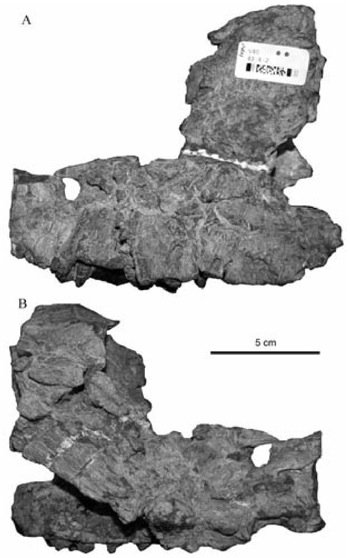 Pachysuchus jaw fragment, viewed from the left (A) and the right (B). Image by XU Xing from Chinese Academy of Sciences.

Paleonotologists Paul Barrett and Xu Xing found the fragment and have determined Young’s original dinosaurian assessment was correct. “The damaged skull piece exhibits many traits never seen in phytosaurs but that closely match what paleontologists have documented among sauropodomorph dinosaurs,”2 Xu Xing says. Too little remains to determine the species.

The reclassification restores the story that phytosaurs “lived alongside and probably preyed on early dinosaurs, were wiped out at the end of the Triassic” and so were out of the way as “dinosaurs rose to global dominance.” In fact, Barrett suggests that rock layers containing post-Triassic phytosaurs elsewhere in the world are erroneously dated and should be re-dated as Triassic.3 (This illustrates the somewhat circular approach to assigning dates in the fossil record.)

While demonstrating the difficulties of identifying some creatures from their fossilized remains, putting Pachysuchus back to a more acceptable spot in the evolutionary timeline does not prove the authenticity of the evolutionary story. The geologic column is viewed by evolutionists as a record of the evolution and extinction of life forms over millions of years. This interpretation is dearly held despite the lack of the transitional forms to authenticate it or observable evidence of biological evolution of new kinds of creatures to show its feasibility. 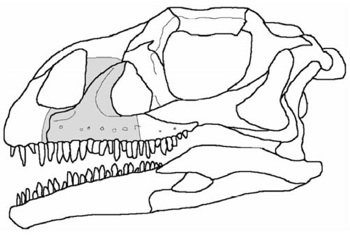 Shape of the rediscovered Pachysuchus skull fragment is shown in grey, set into the outline of a typical sauropodomorph dinosaur skull. Image by R. Laws from Chinese Academy of Sciences.

The biblical account of the global Flood—resulting in catastrophic burial of billions of creatures beneath tons of water-borne sediment as their habitats were wiped out—tells the true story of most of the geologic column. The creatures buried were descended from the kinds created by God in the beginning. Their presence in those rock layers does not mark their evolutionary emergence or extinction. A person’s worldview determines his interpretation of the story in the rocks.

Previous Article Big Dinosaurs Won the Battle but Lost the War Next Article News to Note, May 5, 2012