Does Placental Death Violate the Principle of “No Death Before Sin”?

Dr. Elizabeth Mitchell, AiG–U.S., explains why a placenta is not a living creature.

There was no death before sin. The placenta is one of the most important organs to give birth to a baby and this organ will die after giving birth (cells stop replicating and soon decay). I wonder, if Adam and Eve had not sinned, and Eve would give birth to a baby, how would the placenta cells stay alive outside and cut-off from both mother and baby? MM, Australia

Based on biblical history, there was no animal or human death before sin. Dr. Terry Mortenson has written an extensive article covering the biblical rationale for this belief (Genesis 1:29–30 and much additional Scripture) and showing its relationship to the issue of the age of the earth. As he explains, the Curse upon creation after Adam sinned brought death to all “living creatures” (or נֶפֶשׁ חַיָּה in Hebrew, transliterated nephesh chayyah to indicate the pronunciation for English speakers), a designation for people, animals, birds, and sea creatures. This curse did not apply to plants, as plants are not consider to be living beings (i.e., nowhere called נֶפֶשׁ, nephesh). Furthermore, according to Genesis 1:29–30, many plants were designed to be eaten. (See Do plants and leave die? for more about plants.)

A placenta is not a living creature.

A placenta is not a living creature. Its cells are designed to serve, and when their service is completed, they are simply disposed of. There is no living being or living thing—no נֶפֶשׁ, nephesh—to die in the process.

Let’s consider what a placenta is. The placenta is constructed from genetic instructions contained in the zygote. The zygote forms at fertilization through the union of a sperm and egg. Human life begins at fertilization. As the zygote divides into a multicellular, ball-shaped structure, a group of cells are partitioned off to develop into the placenta, and the remainder—the inner cell mass—becomes the embryo. Research suggests that the cells “destined” to become the placenta are established even earlier than the 16-cell stage, when the inner cell mass can first be distinguished.1

After about five days, there are nearly a hundred cells, and this ball of cells is called a blastocyst. When this blastocyst arrives in the uterus, it needs to implant in the lining of the uterus to obtain nutrients and oxygen for continued growth. The blastocyst is a hollow ball of cells, but inside the ball, adhering to a portion of the inner surface, is the inner cell mass that develops into a baby ready to be born over the course of months. The outer cells of the blastocyst are called the trophoblast. These trophoblast cells are the cells that develop into the placenta. By establishing a connection with the mother’s tissues, the placenta quickly develops into an interface through which vital substances can be exchanged between mother and the unborn baby without permitting actual contact between the mother’s and baby’s blood. 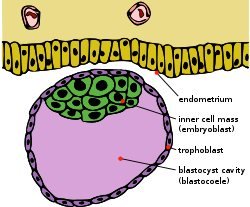 At the earliest developmental stages of human life, the dividing cells differentiate into an inner cell mass, which will become the recognizable embryo as development continues, and the trophoblast. The cells of the trophoblast, which take up position on the outer surface of the ball of cells known as a blastocyst, interact with the endometrium lining of uterus and develop into the placenta, a lifeline for the developing baby.2

The placenta can be thought of as a complex tool that serves the unborn baby’s needs. Once the baby is born, the placenta is no longer needed. It is discarded. In a similar way, there are some structures that form temporarily in the developing baby’s body to sustain or guide the formation of other structures. Examples include the notochord (which acts as a template for cells that develop into vertebrae) and the urachus (which is involved in formation of the bladder). Evolutionists often claim some of these structures are the evolutionary “memories” of previous ancestors, but in reality they are just the templates, scaffolds, and regulators to allow more permanent structures to be built. When their purpose is served, such structures may be reabsorbed, disappearing entirely (like the notochord), or remain as scars or so-called vestigial structures (like the urachus, a fibrous remnant). (Vestigial means “footprint” and as such is a record of embryologic development, not a record of an evolutionary past.)

This situation is comparable to programmed cellular death. The epithelial tissues in your body, like skin and the lining of your bowel, consist of layers of cells that are constantly reproducing and replenishing themselves. Cells reproduce in the bottom layers, and cells slough from the top layers, having fulfilled their functions. Blood cells also have a limited lifespan, and when they are worn out they are destroyed and replaced.3 Such programmed cellular death and the destruction of worn out cells is actually part of the vital functioning of such structures and is not at all the same sort of thing as the death of a person.

Some of the misunderstanding about this question arises because of the evolutionary mindset to which we are all exposed. Evolutionists assume without proof that life randomly came into being from nonliving elements, ultimately forming the first living cell. They claim—also without any observable mechanism demonstrating how—that such a cell continued to multiply and acquire increasing complexity, eventually forming into multicellular organisms to climb the evolutionary ladder over millions and millions of years.

By evolutionary logic, then, a cell is a cell, and a death is a death. Because of this worldview, some evolutionists even argue that all life is of equivalent moral value and attempt to make our biblical position—that there was no animal or human death before sin—look foolish. But in truth, the death of the placenta is just a part of the ordinary course of life. God designed the placenta to be a marvelous and vital but quite temporary organ.