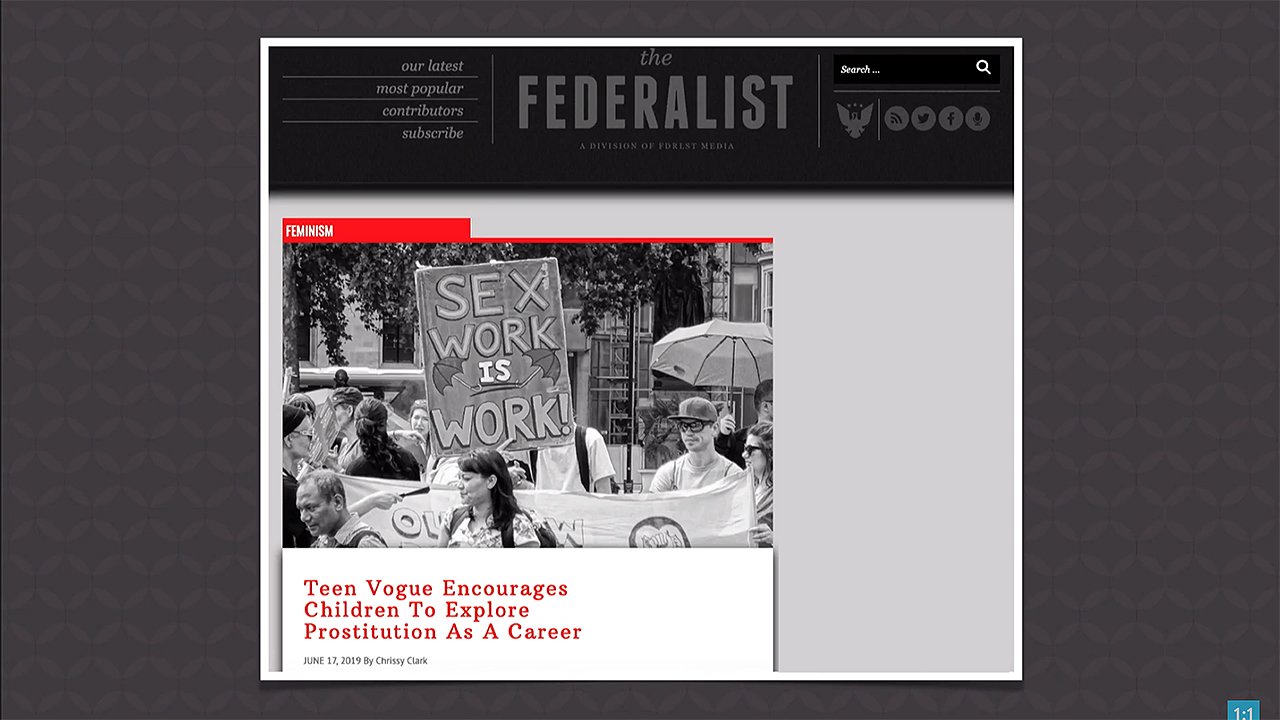 You just can’t make this stuff up. Teen Vogue, a magazine directed towards young girls (12 and up), published an article by a medical doctor entitled, “Sex Work is Real Work.” Yes, you read that right. This article is arguing that there’s nothing wrong with sex work—it should be completely decriminalized and treated like any other legitimate profession. The author even goes as far as to call her work as a doctor that of a “sex worker,” and adds, “in some ways, aren’t we all?”

This article was published back in April, but was recently retweeted by Teen Vogue and is therefore back in the news. The article itself is rather explicit, describing the work sex workers engage in—certainly not something appropriate for the young audience this magazine is targeted towards!

The idea of purchasing intimacy and paying for the services can be affirming for many people who need human connection, friendship, and emotional support.

So, the ethics of paying a prostitute for something God designed to be an intimate, one-flesh union between a husband and wife is inconsequential to this doctor. All that matters is that people find something “affirming” to participate in. It’s the secular, arbitrary ethic showing itself again.

What we’re seeing here is a theme we’ve seen played out again and again—the only (and I really do mean only) sexual ethics is consent (which is itself an arbitrary ethic because, ultimately, why should consent matter?). As long as there are consenting individuals involved, it’s okay in the secular sexual ethic.

But secular ethics is arbitrary. It’s based merely in ever-changing human opinion—and who’s to say which opinion is correct? Ultimately, there’s no foundation for morality, so anything goes (as is clearly seen in this article!). Once you’ve abandoned the Bible as the foundation for one’s thinking, “everyone does what’s right in their own eyes” (Judges 21:25).

Would the Elephant in the Room Please Stand Up?

Interestingly, this article never even mentions the $20 billion-dollar-a-year “elephant in the room”—sex trafficking. Prostitution (and pornography) is fueled by sex trafficking—often of increasingly young victims. It’s a heinous abuse and devaluing of those made in the image of God.

This doctor never once mentions the trail of broken, enslaved individuals that sex trafficking and prostitution leaves. The average life expectancy of a trafficked sex slave is only seven years—and half of those drawn into prostitution here in the US started at age 12. Let that sink in a moment: twelve years old.

An article from our Answers magazine gives just a glimpse into the horrors of prostitution and its fuel, sex trafficking:

Although it may seem unbelievable, half of those drawn into prostitution in the United States entered at age 12, and nearly 70 percent entered before they were age 16 . . . one study revealed that 80 percent of women in prostitution are assaulted, including death threats.

It’s a dreadful, stomach-turning industry that abuses young girls and boys while satisfying the depraved desires of sinful men. This doctor should be utterly ashamed of herself for promoting this lifestyle to young girls—and Teen Vogue (which publishes all kinds of horrible trash) needs to pull this despicable article.

You can learn more about a biblical response to the horrible crime of sex trafficking in this article: Human Trafficking: The West’s New Slave Trade.

When we start with God’s Word, we have a foundation to denounce sex work—and those who would pay for such “services” and enslave others in it—as sinful and exploitative.

She concludes her article by stating, “evidence, not morality, should guide law reforms and sex work policy for full sex work decriminalization.” But what she’s really arguing is not that “evidence” guide law reform—the evidence is overwhelming that the sex worker industry is rife with abuse and exploitation. She’s arguing that her subjective morality governs law reform. But her morality is arbitrary, grounded in nothing but her own opinion.

When we start with God’s Word, we have a foundation to denounce sex work—and those who would pay for such “services” and enslave others in it—as sinful and exploitative. As Christians, we should seek to rescue young women and men from this industry and share with them the good news of Jesus who died to pay the price for their salvation. We should stand strong against the normalization of prostitution and advocate for sex trafficking victims.

The body is not meant for sexual immorality, but for the Lord, and the Lord for the body . . . Do you not know that your bodies are members of Christ? Shall I then take the members of Christ and make them members of a prostitute? Never! Or do you not know that he who is joined to a prostitute becomes one body with her? For, as it is written, “The two will become one flesh.” But he who is joined to the Lord becomes one spirit with him. Flee from sexual immorality. Every other sin a person commits is outside the body, but the sexually immoral person sins against his own body. Or do you not know that your body is a temple of the Holy Spirit within you, whom you have from God? You are not your own, for you were bought with a price. So glorify God in your body. (1 Corinthians 6:13, 15–20)

Keep in mind this same anti-Christian, depraved magazine also featured articles for these teen girls on how to send naked selfies and how to get an abortion without your parents’ consent. This magazine is what you expect to find in ancient pagan Greece or Rome—not our once very Christianized, and now, sadly, very secularized culture.

I discussed this item yesterday on Answers News with cohosts Dr. Georgia Purdom and Bryan Osborne. Answers News is our twice-weekly news program filmed live before a studio audience here at the Creation Museum and broadcast on my Facebook page and the Answers in Genesis Facebook page. We also covered the following topics: