Engaging in the Battle of Worldviews at a Public University

It was a national media event earlier this year and involved a lot of personal stress. But the two-hour program at the University of Central Oklahoma was a resounding success in many ways, as Dr. Georgia Purdom and I gave public presentations followed by a question and answer time.

You may have heard I was invited to give a lecture at the university, but because of opposition from the LGBTQ group on campus, the invitation was rescinded. Then, due to enormous public pressure, I was reinvited to speak! 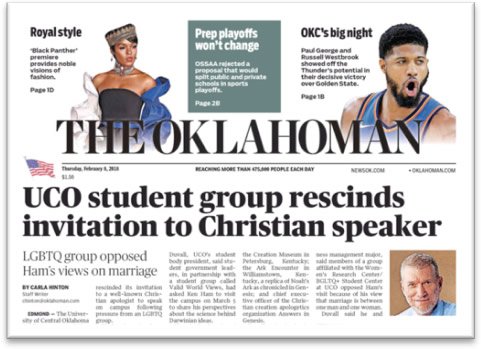 Media across the nation covered the UCO event. As you know, there’s been an ongoing battle in public universities over First Amendment rights involving freedom of speech—and such battles have been heating up.

The auditorium was packed.

After the presentation, I had a number of people say things such as

You really disarmed the LGBTQ group!

You didn’t give them what we believe they wanted.

We think they were hoping you would say something against them so they could accuse you of hate speech. But the way you handled those issues was so disarming.

Every church needs to learn how to address these volatile issues regarding gender, as was done here.

After the event, a person who watched online said to me, “I’ve grown up in the church, but have never been taught to think foundationally, as you presented. This makes so much sense and has really challenged me to change the way I speak to people about issues like abortion, gender, and gay ‘marriage.’ I wish everyone in the church could hear the presentation and especially see how the question time was handled.” 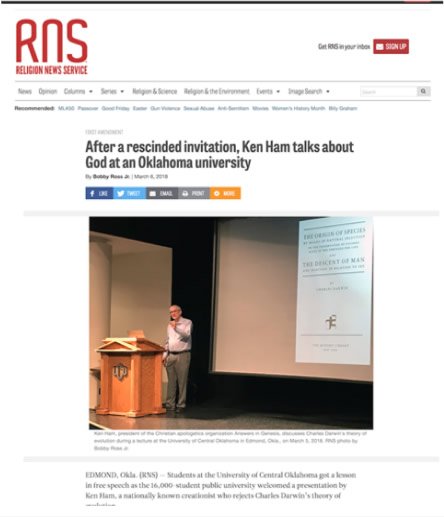 There were many media articles about this university talk. One such report came from the Religion News Service and was published by several media outlets across the nation. In this article, specific reference was made to a question I answered at UCO, one that many people have since commented on. This was the answer that many told me was disarming for the LGBTQ group—in fact, the head of the group on campus was actually in the audience for my talk. Here are excerpts from the RNS syndicated article:

One questioner—a self-described “spirit-filled Christian” and member of the LGBTQ community—said: “I sought the Lord and churches for why I feel attracted to the same sex. I found the church nor churches’ traditional view on (LGBTQ) fit my experience of hearing the Lord speak directly to me. Science, not the church, gave me peace. How can you say my experience of still being a child of God isn’t valid?”

Ham said he would start by asking how the person heard from God: “My way of dealing with that would be to say, ‘Let’s judge what the actual written word of God says. Let’s judge what you’re saying against what it says.’

“Because I have a different worldview in relation to marriage and gender doesn’t mean I hate that person,” Ham added. “Sometimes, people accuse us of hate speech because we disagree with them. It’s a clash of worldviews. That doesn’t mean we hate someone. In fact, the Bible commands us to love everyone, and that’s what we do.”1

I said much more than this, of course, during the Q&A time. I explained, as I did in the main presentation, that if people don’t build their thinking on the Bible as I do (and if they don’t have the same interpretation of Genesis as I do), then we’re not going to agree on how we view marriage, gender, abortion, and so on.

I wanted people to understand that the essence of the battle comes down to the foundation that their worldview is built upon—and until we can sort that out, we are not going to agree regarding how we view such culture issues.

As I explained in my talk, whether it’s racism, gay “marriage,” gender battles, abortion, or other issues, they all involve one overall issue—where does your worldview come from?

Many people have told me the way we presented our worldview beliefs at UCO took a lot of the emotionalism out of the arguments.

It’s a battle over our starting points!

Actually, this approach is something we’ve been taking for years regarding creation, evolution, and the age of earth battles. In reality, the clash is not about a person’s view of origins or the age of the earth. It’s really between God’s Word and man’s fallible word—a battle over whether our worldview is built on God’s Word (and if we take it as written, as we need to) or man’s word. It’s a battle over our starting points!

But we need to be reminded that “there is nothing new under the sun” (Ecclesiastes 1:9). This is the same old battle that’s been going on since God told Adam not to eat the fruit of one tree (Genesis 2:17), and Satan tempted Eve to question God’s Word (Genesis 3:1) and declared that Adam and Eve could be their own gods—to decide “truth” for themselves (Genesis 3:5).

It’s the battle between two foundations: God’s Word and man’s word! We see this struggle all the way through the Bible described like:

If only more people in the church (including pastors) truly understood the nature of this monumental battle.

As you know, Answer in Genesis is a ministry the Lord has raised up to equip the church and families to defend the Christian faith, develop a strong biblical worldview, and share the life-changing gospel with confidence.

We carry this out in many ways at AiG and are now reaching upwards of 30 million people a year through our attractions (Ark Encounter and Creation Museum), award-winning websites/social media, VBS and Sunday school curriculum, apologetics resources (books, DVDs, and so on), outreach speaking events in the United States and around the world, radio programs, cutting-edge research, Answers magazine, and more!

You may remember that we launched “Operation Upgrade” at the Creation Museum late last year, which will dedicate a new section of the museum to biblical worldview teaching. I am excited to share that those upgrades are underway, and we have made great progress!

With the attendance doubling at the Creation Museum since the Ark opened, the improvements are helping to alleviate congested areas or what we call “choke points.” Also, the upgrade to the museum’s special effects theater, which will be completed early this summer, will provide a new cutting-edge 4D experience, allowing us to present powerful teaching of foundational truths in a unique, immersive way.

The “Operation Upgrade” improvements, including new exhibits for the first one-third of the Creation Museum, will continue in stages through 2019. These world-class exhibits will help teach guests a worldview that is anchored in God’s Word!

We have also made great progress on the funding for the upgrades, having raised around 80% needed so far. Your support helps AiG present to the church and world the clear teaching of God’s Word regarding the hot-button issues of the day.

The unfolding of your words gives light;
it imparts understanding to the simple. (Psalms 119:130)

I trust you are encouraged to know that your prayers for and support of this ministry are investments with phenomenal spiritual impact. The outreaches of Answers in Genesis impact millions of people in many ways, including through national media coverage. In this instance with the University of Central Oklahoma, our talks were a witness to a public university and clearly presented the foundation of God’s Word and the gospel (including to the LGBTQ group)!