Since creation, water striders have been skipping effortlessly across lakes and ponds. The secret is an ingenious design that only the Great Designer could have invented.

Water striders skim across ponds and streams as if skating on ice. How do they “walk on water” while staying completely dry?

A closer look at water striders’ feet provides the surprising answer. Many other bugs stick like glue when they touch water, but the water strider’s feet are covered with thousands of fuzzy little hairs, called microsetae, that trap air and create a floating cushion.

These needle-shaped strands are dozens of times narrower than a human hair and coated with a special wax. Each strand also is covered with an orderly arrangement of microscopic channels, or nanogrooves. When wet, the grooves trap tiny air bubbles. The result is an effective water-repellent, or hydrophobic, barrier. Taking advantage of the natural surface tension or “stickiness” of water itself, the airborne strider remains high and dry.

A similar microfiber design is found on the toes of the gecko lizard. But in this case, the grooves are divided into many small branches. This rough surface creates forces of attraction at the molecular level (called van der Waals forces) that allow the lizard to walk directly across walls and ceilings. 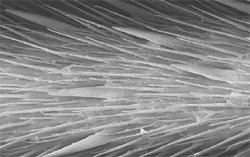 Hairs on the water striders’ feet are covered with little channels, called nanogrooves. These channels trap air bubbles that form a floating cushion.

Researchers in China have measured the extent to which water striders avoid submersion. They made an artificial strider leg, complete with hair follicles, then gently pressed it against a film of water. The leg made a depression in the water layer without sinking, supporting 15 times the strider’s weight before finally breaking through the water surface.1

Studies of the water strider may lead to miniature floating robots to monitor water quality. Also, the addition of an invisible layer of microsetae may lead to new water-repellent fabrics and paints.

A water strider moves with impressive speed across water surfaces. It accomplishes this by digging the very tips of its feet into the water surface and generating small vortices, or swirls. The insect then pushes against the resulting “mini wall” of water and rapidly recoils forward.

Striders are able to move 100 body lengths in one second. Scaled up to our size, this is equivalent to a person moving at an astounding 400 miles per hour (640 km/hr).2

God created every kind of creature during the Creation Week, including the amazing water striders. They are far from simple in their structure and behavior. Instead, these insects reveal complex creative design and inspire practical ideas for new products.

We don’t yet have boots that allow us to skip across a pond as effortlessly as a water strider, but imagine the possibilities!

Dr. Don DeYoung is chairman of science and math at Grace College, Winona Lake, Indiana. He is an active speaker for AiG and has written 20 books on Bible-science topics. Dr. DeYoung is currently president of the Creation Research Society with hundreds of members worldwide. His website is DiscoveryofDesign.com.
Previous Article DNA in the Kitchen Next Article Mysterious Madagascar