Ants are one of the most abundant creatures on earth. For every person walking around, there are perhaps 16 million ants.

One secret of the ants’ success is their ability to cooperate with numerous other organisms, including fungi—the annoying stuff that turns our bread moldy or makes our toes itch. However, to ant farmers, fungi are a luscious crop and a life-sustaining food.

Leafcutter ants need fungi because they can’t easily digest leaves alone. So the ants first remove the leaves, bring them home, and chew them up to make a fertilizer for the fungi. The fungi then grow and produce protein and sugar, which the ants eat.

What is the Creator teaching through symbiosis? Creatures aren’t meant to live alone!

This partnership between ants and fungi is a form of symbiosis called “mutualism” in which both organisms benefit. In fact, the ant colony would perish without this partnership.

What is the Creator teaching through symbiosis? Creatures aren’t meant to live alone! Most of all, we need Him, the Author of life! We find reminders of the Creator all around us, including in our own backyard.

What wondrous lessons we can learn if we heed the Bible’s directive to “consider the ant” (Proverbs 6:6, 30:25). 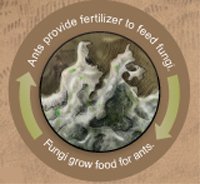 Leafcutter ants build elaborate gardens with many chambers. In each chamber, ants farm massive clumps of nearly pure fungus. A special class of tiny worker ants weaves in and out of the fungal garden and removes contaminating fungal “weeds.”

Within these ant gardens is another aggressive fungus, called Escovopsis. If uncontained, this fungus would quickly take over, destroying the colony. To protect the farm, ants release an antibiotic and rub it on the fungus. 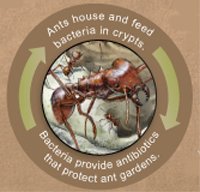 However, ants don’t produce these antibiotics directly. They carry bacteria in small crypts in their bodies, and these bacteria produce the antibiotics. The ants apparently feed the bacteria with glands below the crypts. Before this discovery, medical researchers thought they were the first to discover antibiotics!

This amazing relationship befuddles evolutionary biologists. If Escovopsis has been around for 50 million years, why hasn’t it developed resistance to the bacteria’s antibiotics? After all, many bacteria have already become resistant to the antibiotics that doctors developed 70 years ago.

Escovopsis appears to thrive only in ant colonies. So why would God put it there? Perhaps in the beginning, Escovopsis controlled the growth of the crops to prevent them from invading the forest. If true, fungal-farming ants once participated in a four-way symbiosis (the ants, two kinds of fungi, and one bacterial species!)

All Shapes and Sizes

Leafcutter ants live in highly organized societies with many different kinds of workers. Each worker has just the right size and equipment to do its job. The largest are the soldiers, which protect the colony. Their large mandibles can slice leather as well as human skin.

Several different-sized workers, called “media,” harvest the leaves. The largest media ants cut the big leaves and pass the pieces to smaller ants, in assembly-line fashion. Another kind of worker tends the white, fluffy fungal gardens. The smallest ant is the gardener, which “weeds” the garden. They can weigh 300 times less than the soldier ants.

Reference: Journey of the Ants by Holldobler and Wilson

Dr. Joe Francis is professor of Biological Sciences at The Master’s College. Dr. Francis serves as a board member of the CBS (a creation biology study group).