Anyone strolling through an oak or beach forest in the northern hemisphere autumn (fall) is sure to find them—among the countless brown leaves scattered on the ground, some are still green (very green, in fact) in one portion (see photo below).

If you look closely, you discover on this leaf a whitish spot, or else a winding trail. This is evidence that the larva of a tiny leaf-mining moth is living inside the leaf. Leaf-mining species also occur among beetles and flies.

Why don't the infested leaves turn completely brown like the rest? The amazing thing is that the larva secretes a hormone that keeps the surrounding area of the leaf fresh. The cells of these “green islands” still keep on photosynthesizing—making food from sunlight and carbon dioxide in the air. And the tiny larvae continue to live on the carbohydrates formed by this process, even after the leaf itself has dropped to the ground and died. Only some time later do these larvae leave the leaf and enter the ground to pupate.

This presents some riddles for those who adhere to evolution: 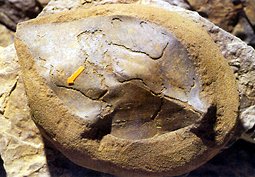 And what should we make of the fact that fossils of such leaf miners are already found in the “geologically oldest” fossil leaves of the upper Cretaceous? This one [see photo right] is from the Dakota sandstone in Kansas, USA, which is regarded as being from the alleged “age of the dinosaurs.”

At most, evolutionists will not be able to produce more than some flimsy “just-so” story. It makes much more sense to believe that these obvious provisions by the Creator for His creatures were programmed into the insects from the beginning.