On February 4, more than seven million people tuned in online to watch Ken Ham debate Bill Nye on whether creation is a viable model of origins in the modern era. Another several million people accessed the recorded video in the following days.* Such overwhelming interest clearly contradicts the secularist line that there’s no debate over origins. While the results vary from poll to poll, studies show that at least one-third of Americans believe man has existed in his present form since the beginning.** That’s hardly an insignificant number.

In his presentation Nye, albeit unwittingly, highlighted the inability of science alone to explain everything. For example, when asked how consciousness could have arisen from matter, Nye’s response, “Don’t know. This is a great mystery,” aptly demonstrated that science cannot explain how consciousness—or morality and logic, for that matter—came to be without God. It’s no wonder that evolutionary scientists have difficulty making their case to the public. 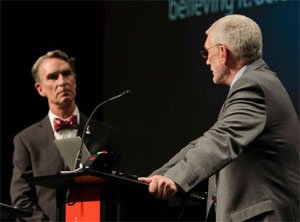 The overwhelming interest in the recent debate between Bill Nye and Ken Ham shows that the debate over our origins is alive and well.

Leading up to the debate between Nye and Ham, social media platforms were abuzz with the evolution/creation issue and for a little over a day, the debate was trending number one on Facebook. People are searching for answers to their questions about purpose and meaning in life—where we came from and why we are here—but science alone has not been able to deliver.

The debate over our origins is alive and well, which is why it is critical that Christians know what they believe and why. If the polls are to be trusted, many people have not made up their minds about where mankind came from.

One of the things Christians can learn from the debate between Ken Ham and Bill Nye is how necessary an understanding of biblical apologetics is to our faith. Believers have the unique opportunity to clearly articulate the gospel to others—especially those questioning the origin of the universe—beginning with creation in Genesis 1. Science properly understood can support that effort, but it is the gospel that God has ordained to bring the unsaved to Christ.

“Bill, I want to let you know that there is a book out there that tells us where matter came from. The very first sentence in that book says, ‘In the beginning God . . .’”

—Ken Ham’s response to the audience question, “How did the atoms that created the big bang get there?” in his February 4 debate with Bill Nye. Nye’s answer:“This is a great mystery.”