More evidence of the global Flood (Genesis 6-9) is exposed at Grand Canyon than any other place on earth.

“You know, last time I was here, my thinking was totally different about this place. The idea that these layers were deposited over millions of years sounded reasonable to me.”

“The Bible reveals a lot about history, doesn´t it?”

“Yeah, after reading all that stuff you gave me, I see how the Bible´s account of a global Flood opens the door to a better understanding of the past.”

More evidence of the global Flood (Genesis 6-9) is exposed at Grand Canyon than any other place on earth.

At every overlook, you´ll see thick, uniform rock layers that extend as far as the eye can see. The flat boundaries between most of these rock layers give testimony to layers being laid down in rapid succession during, or shortly after, the global Flood.

A hike down the South Rim´s Bright Angel Trail provides ample opportunity to see marine fossils embedded in the limestone walls. These fossils, thousands of feet above sea level, indicate that ocean waters rose up over the continents during the Flood, depositing ocean creatures on the continent.

If you raft down the Colorado River, you will find folded rock layers, several hundred feet in height. The fact that the layers could bend without breaking indicates that they were laid down quickly and then folded while still soft, not after millions of years.

Whether by raft, trail, or lookout points, a trip to Grand Canyon will inspire young and old alike to know—and worship—the God who judged the earth in a worldwide Flood.

A Different View of the Canyon

Experience the canyon from the perspective of the Colorado River. On the way, you can stop to explore side canyons and see up close the evidences of the global Flood that buried the entire earth. Several creationist rafting trips are available, led by expert guide Tom Vail, who has guided thousands of people, ages 8 to 88, down the river, offering a truly exciting view of the evidence. 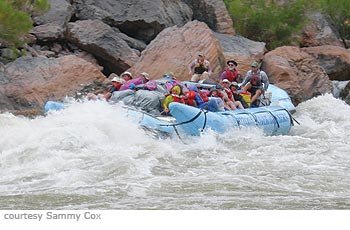 Rocks that bend? Examples of folded rock layers can be found throughout the bottom of the Canyon. As you raft down the Colorado River (at Carbon Canyon at mile 64.5) and take a short hike up the trail, you can see rock that is folded at a 90° angle. This indicates the rock layers were folded while still wet and pliable, as they would have been at the end of the Flood. 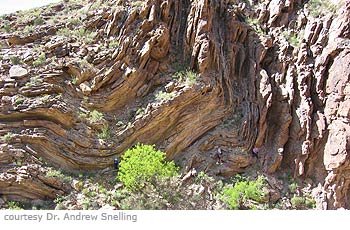 At the Desert View overlook, where this photo was taken, you can see several different kinds of evidence for the Flood. The best time to take photos at this overlook is early morning.

Sea Creatures High Above Sea Level:
We find fossils of sea creatures in several layers of Grand Canyon (such as the Kaibab Limestone), over a mile above sea level. Ocean waters must have carried them onto the continent during the Flood.

Great Unconformity:
Even from a great distance away, you can see the line where the Flood waters first advanced onto the continent, depositing sand and other sediments. This boundary, called the Great Unconformity, marks where the series of flat Flood layers begins.

Transcontinental Layers:
Several rock layers at Grand Canyon, such as the yellow Tapeats Sandstone, can be traced across the entire U.S. and even across the Atlantic Ocean to Europe and the Middle East. It’s striking evidence of a global Flood.