See evidence of the dramatic mountain-building at the end of the Flood, as well as sections of the rock layer sequence, including pre-Flood, Flood, and some post-Flood.

Death Valley National Park—the name alone sounds forbidding. In this otherworldly place where rainfall is less than 2 inches (5 cm) per year, the evaporation rate is 150 inches (381 cm) per year, and temperatures soar above 120°F (49°C), how can animals or plants possibly survive in such a harsh environment?

Not only is Death Valley an amazing place of extremes, this hottest place in the United States boasts many evidences for the global Flood. Concepts that are hard to understand in a geology book come alive as children and teens (and adults) see the incredible formations in Death Valley National Park.

If you take along the right creationist resources, you will discover how various basins testify to major earth movements along the north-south fault lines that pushed down parts of the earth during and shortly after the Flood. The rising peaks show evidence of the earth´s surface being drastically pushed up during this earth-reshaping event.

Throughout the park you will see exposed rock layers that were laid down during the Flood, as well as pre-Flood basement rocks that were likely from the Creation Week and post-Flood rocks similar to those found in Grand Canyon.

At 282 feet (86 m) below sea level, Badwater Basin is not only the lowest place in Death Valley National Park; as a result of the area being pushed down during the massive earth movements during the global Flood, it’s also the lowest place in North America. Once part of a lake that dried up at the end of the Ice Age, this basin was left with a high concentration of salt in a shallow pool of water.

Amazingly, this hot, salty basin is home to the Death Valley pupfish that can survive in 112ºF (44ºC) water, which is also three times as salty as ocean water. The pupfish is a remnant of a fish species that once lived in Lake Manly after the Flood. 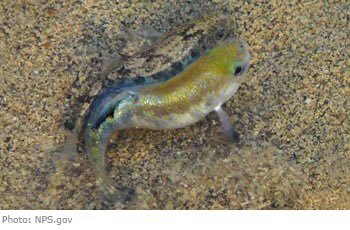 At 11,049 feet (3368 m), Telescope Peak is the highest place in Death Valley National Park. It was named in 1861 by Dr. Samuel George, who said that looking from the peak was like looking through a telescope. Known for its great and rapid vertical rise above the valley floor (it is only 20 miles (32 km) away from the low-lying Badwater Basin), it has been compared to the sudden rise of Mount Everest. A dramatic rise of mountains without time to erode speaks of recent formation and is consistent with , which describes the mountains rising at the end of the Flood. 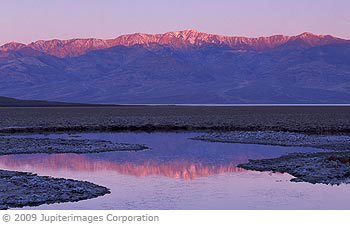 From Zabriskie Point, you can see the layers of light-colored muds and silts that were produced after the Flood, when sediments eroded from the adjacent mountains and filled in parts of Death Valley.

Between other layers, you can see dark-colored basalt layers made from lavas. These represent early post-Flood volcanic activity in the area, as molten rock (magma) found its way to the surface as a result of the earth movements opening up passageways. This shows how the earth was still in a dynamic state of readjustment in the few years following the Flood. 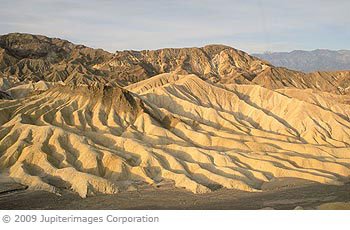