Fascinating rock layers that give testimony to the biblical account of the global Flood are found along this spectacular coastline.

Few places in the world are as spectacular as the coastline stretching from Newcastle to Kiama in New South Wales, Australia. Beautiful coasts, national parks, museums, and fascinating rock layers that give testimony to the biblical account of the global Flood are all found along this southeastern coastline. For instance, you will find numerous coal beds that have been exposed along the craggy coastline. These same coal beds have been found in other parts of the world and actually contain the same kind of plant fossils.

Other Flood evidences can be seen among the spectacular cliffs around the famous Sydney Harbour where you can see rock layers of Hawkesbury Sandstone that were deposited during the middle of the year-long global Flood. In nearby Newcastle (north of Sydney) and Kiama (south of Sydney), volcanic rocks and coal beds, included in the sequence of rock layers, give testimony to the violence of the Flood that rapidly deposited sediment layers across vast areas of the world.

With a little preparation, this beautiful destination can provide many teachable moments about the Flood of Noah´s day that left its indelible marks in the rock layers we see today.

North of Sydney in Newcastle, numerous cliffs and rocky outcrops reveal exposed coal beds with associated fossilized trees. The cliffs and beaches are beautiful to walk around, particularly at low tide from Catherine Hill Bay to Main Beach at Newcastle, which is near the downtown area. Massive conglomerate beds, containing mixed up pebbles and volcanic ash beds between the other rock layers, are exposed—all testimony to the violence of the Flood catastrophe.

While evolutionary geologists teach that most coal deposits are basically a result of peat building up in swamps over millions of years, the Flood of the Bible provides a better explanation. Relenting rains eroded away soil and plants, and rising seas and tidal waves destroyed the forests of the world. A continuous amount of sinking plants could produce the thick layers of plant material needed to form coal beds. 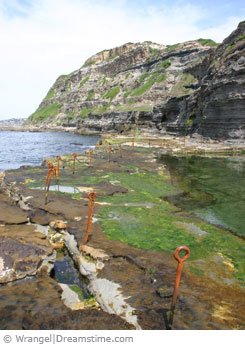 The spectacular cliffs around Sydney Harbour are composed of the Hawkesbury Sandstone, rock layers that were rapidly deposited during the middle of the year-long global Flood. This layer of sandstone stretches some 7,700 square miles (20,000 sq. km) and is up to 820 feet (250 meters) thick. The cliff is made of three rock types: sheet sandstone, massive sandstone, and occasional thin mudstone lenses containing fossils in "graveyards." Each type has features that indicate being deposited in fast-flowing currents, such as during a violent flood.

Your drive south of Sydney through the Royal National Park along Lawrence Hargraves Drive to Stanwell Tops will take you to a spectacular lookout of the coastline with its beautiful headlands and beaches. Heading on further south down the coastline to Wollongong, you will see a sequence of coal beds sandwiched between other rock layers, some of which include fossilized trees. South of Sydney, just beyond the city of Wollongong, volcanic rocks appear in the rock layers below the coal beds along the coastline of Kiama, giving testimony to the volcanic violence of the Flood that accompanied the rapid deposition of the sediment layers across vast areas, even across continents. The coal beds found in this part of Australia are also found in Antarctica, India, South Africa, and South America, all consisting of the same kind of plant fossils.