Aside from their beauty, one of the most interesting things about these dramatic white cliffs that stretch 10 miles along the southeastern coast of England is their testimony to the earth-covering Flood.

Stretching 10 miles (16 km) along the southeastern coast of England, the dramatic and stunning White Cliffs of Dover have become a symbol of British heritage. Facing toward the continent of Europe, these cliffs have served as a citadel, protecting the area from sea invasions.

Aside from their beauty, one of the most interesting things about these cliffs is their testimony to the earth-covering Flood. During the middle and late parts of the Flood, sedimentary rock layers full of fossils were laid down. Some of these layers can be seen today as the spectacular White Cliffs. In fact, the reason the cliffs are white is that the rock layers are full of calcium carbonate, leftovers from the shells of microscopic creatures buried during the Flood.

Just as spectacular, and even more accessible are the chalk beds along the Dorset Coast, further down the English Channel coast in South West England. Here, as well as in Dover, you will find large ammonite and other shell fossils in the chalk. You will also see other sedimentary layers chock full of marine fossils.

Both areas along this coastline are a testimony to the Flood of Noah´s day, when ocean waters rose up onto the continents and deposited these sedimentary layers full of marine fossils.

Chalk Beds—Testimony to the Global Flood

One of the most-asked questions when people visit the famous White Cliffs of Dover is what makes them white? These dramatic cliffs are made up of calcium carbonate, a pure type of limestone consisting of trillions of fossilized microorganisms.

Evolutionists claim that the chalk formed slowly over millions of years, especially considering its usual slow accumulation today as microorganism die and their calcium-rich shells accumulate at the bottom of the ocean floor. However, faster accumulation is known to be possible, given the right conditions, such as turbulent waters, strong winds, decaying fish, and increased temperature and nutrients from volcanic waters. The biblical account of a catastrophic, worldwide Flood provides the better explanation for these chalk beds that formed thousands of years ago, not millions. 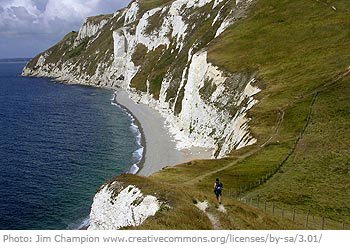 Further down the English Channel coast in South West England, you will find more chalk beds and many other sedimentary rock layers along the Dorset Coast. Numerous walking trails provide easier access to the chalk beds, many of which contain large ammonite and other shell fossils. The whole area is a fossil hunter’s paradise. 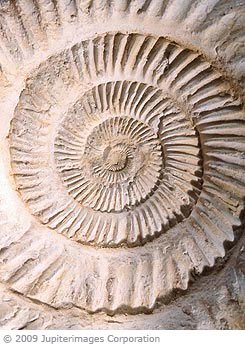