This summer, the beauty of national parks and tourist attractions throughout the United States will awe millions. 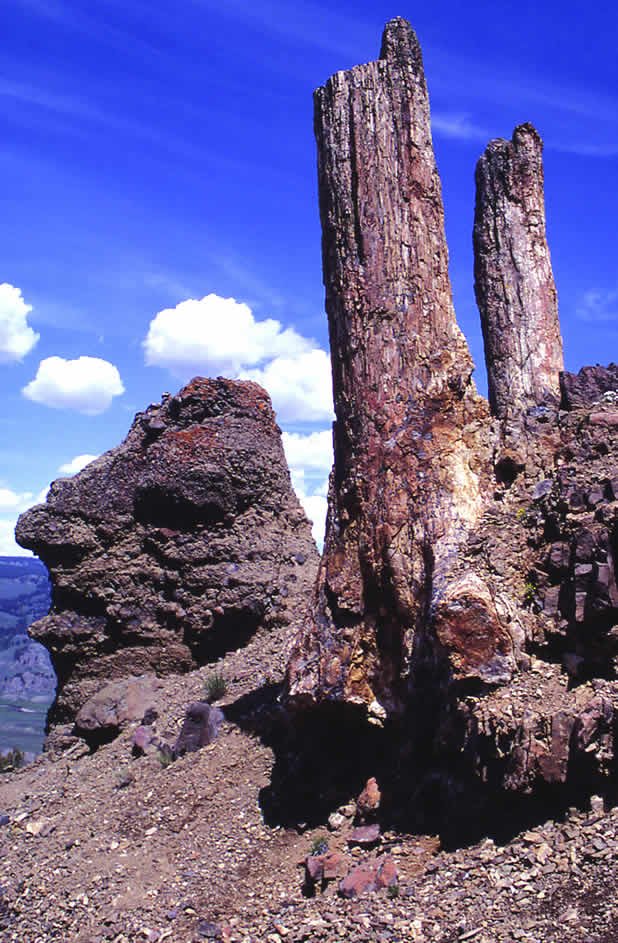 Yellowstone (Montana): Only the right catastrophic conditions, produced by the Flood, could have formed these petrified trees.

Unfortunately, millions will also be taken in by evolutionary teaching—unless they are prepared to stand against it. We can discover evidence of God’s character—His perfection, His power, His care, His judgment—as we explore and enjoy the wonders of the world that He has made. Regardless of where you start or how many destinations you plot on your memory-making tour, these are a few spots we’re sure you won’t want to miss.

Yellowstone is the world’s first national park. It is famous for beautiful hot springs, “Old Faithful” and other geysers, and abundant wildlife. As you tour this enormous park, which covers over two million acres in three states (Montana, Wyoming, and Idaho), look for evidence of a young earth in the thermal basins and jagged formations around Yellowstone Falls. In some places in the park, erosion of hillsides reveals layers of upright petrified trees, which are interpreted by evolutionists as multiple forests spanning long ages. But compare that with what was learned at Spirit Lake at Mount St. Helens—trees buried in different layers of soil were in position to be petrified in just a few years after the volcano’s 1980 eruption. While at Yellowstone, gather your family and praise God for the marvelous beauty, the fantastic colors of the thermal basins, and the intricacies of design in the animals He has created. 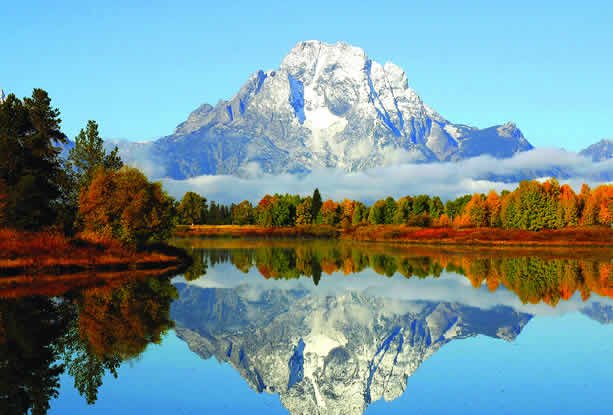 Grand Tetons (Wyoming): These mountains show the effects of a single Ice Age on this uplifted area. The earth’s uplifting and the Ice Age are both the results of the Flood.

You can demystify these secular shrines and use them as vehicles for evangelism and reminders of the truth of God’s Word. Let’s give God the glory as we enjoy and learn from the world in which we live.

Majestic mountains and glacial features abound in the Tetons less than 100 miles (161 km) from Yellowstone. Here you see, and you can share with your children, the truth of Psalm 104:8 (“The mountains rose; the valleys sank down,” NASB). It has been calculated that the Tetons underwent 25,000 feet (7,620 m) of vertical lifting. Discover evidence of glacial moraines, outwash plains, circular lakes, hanging valleys, and more. Many creationists believe that one major Ice Age occurred within only a few hundred years after the Flood and that there were smaller regional advances and retreats within this one major event. Secular geologists usually talk about three or four major ice ages spanning vast ages, but most now date the last major ice advance to have been within 10,000 years. Discuss the significance of that number, and make sure you use your binoculars to observe the layer of sandstone on top of Mt. Moran; it is part of the same Tapeats Sandstone layer found near the bottom of Grand Canyon!

This 210,000 acre (850 km2) park in Utah is a fantastic display of a dinosaur graveyard. One explanation holds that these dinosaurs died, were carried downstream by a river, collected on a sand bar, and were later buried. Interesting! But what kind of current would it take to wash a 70-ton (71 m. ton) dinosaur downstream? And how long could it lie there before burial without decomposing? Explain to your children that this park shows excellent evidence of rapid burial, catastrophic flooding, and massive currents—just what we would expect from the global Flood of Noah’s day. 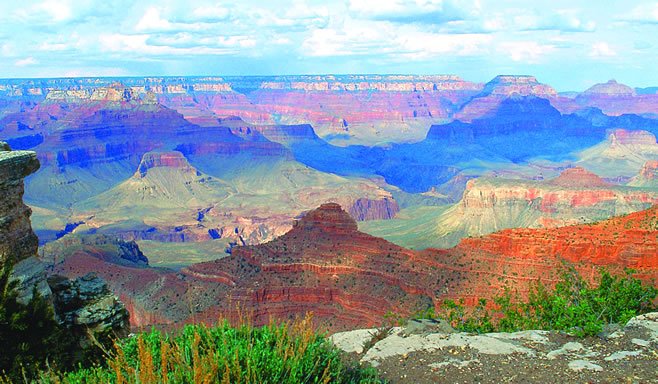 Grand Canyon (Arizona) is evidence for rapid formation, not millions of years.

Get ready for the awe-inspiring vistas, colors, and beauty of this most-studied national park. Each year millions visit this monument to catastrophe. But they are met by antibiblical explanations stating that the rock layers contain the record of the development of life over millions of years. Depending on which section of the canyon is being discussed and who you are talking to, the canyon formation supposedly took between 6 and 70 million years of slow, gradual erosion by the Colorado River (the “little water, lot of time” model). But from a biblical worldview, rock layers may be interpreted in terms of catastrophic deposition: the lower layers of the Inner Gorge being “Creation Week” rock and the horizontal layers representing various episodes during the Flood. Help your children understand that canyon carving could be accomplished in a relatively short time by catastrophic emptying of a great inland lake to the northeast of the canyon shortly after the Flood (the “lot of water, little time” model). Grand Canyon is a monument to remind us about God’s judgment of a sinful world at the time of Noah. Take time to meditate on the awfulness of sin, but also take time to marvel at God’s gift of grace in salvation through the Lord Jesus Christ, our “Ark” of safety in the coming judgment. Consider, too, how God can make something beautiful out of destruction, even in our own lives.

On May 18, 1980, Mount St. Helens erupted (triggering an earthquake that measured 5.1 on the Richter scale). The eruption buried 230 square miles (596 km2) of forest and simultaneously demolished a number of secular geologic theories. The world saw how rapidly 200–600 feet (61–183 m) of sorted layers were deposited by catastrophic mud and ash flows. The resulting landslide caused over 1,300 feet (396 m) of Mount St. Helens’ summit and northern slope to be ripped away. When you visit this awesome reminder of God’s power in nature, remember that the Creator controls it all. “He touches the hills and they smoke” (Psalm 104:32). God’s power, love, creativity, and sovereignty are seen in all of His works of creation. But the greatest display of His character was seen when He overcame our sin on the Cross.

As you arrive at either of these underground passageways, an awesome world awaits below your feet. Standard explanations of cave formation and stalactite/stalagmite growth assume long periods of time. But how then do you explain the bat, preserved in a stalagmite at Carlsbad? Either it was a mighty slow bat, or it doesn’t take so long for cave formations to develop! Time is not the hero of this plot. If conditions are right (plenty of water and minerals), caves can form rapidly. A newly formed cave near Chihuahua, Mexico, has crystals as large as telephone poles. The Smithsonian reports that these may have formed in only 30–100 years (not millions of years) because of the extreme temperatures and humidity! Read Genesis 7:11 to your family and think about the awesome power of the Flood of Noah’s day. 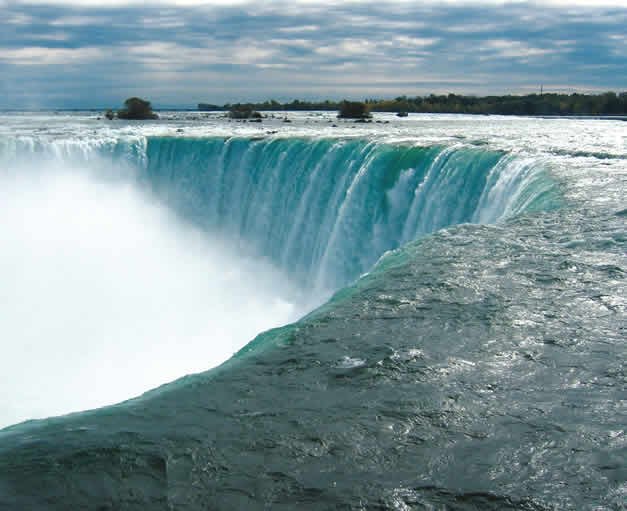 What a place! It is hard to grasp the volume of water thundering over the Falls—more than 600,000 gallons (2,271 kl) per second at its greatest flow. With this amount of water pounding against the shale and limestone on the river’s bottom, Niagara Falls has actually eroded over 7 miles (11 km) backward from its original location downstream. Some say the Falls are being cut back in places up to 5 feet (1.5 m) per year at today’s erosion rate. But what if there was even more water flowing over the Falls in the past? This would have been possible soon after the post-Flood Ice Age as glaciers, thousands of feet thick, liquified. This great amount of melted ice would have cut the Falls much more quickly. The scenery of Niagara Falls is picturesque, but even more astounding is the evidence for a global Flood and its after-effects. There are many tourist “dis”-tractions that will compete for your vacation dollars at Niagara Falls. But we highly recommend the simple, wet boat tours departing from the Canada side of the border. It’s an unforgettable experience!

(© Alpha Omega Institute, May 2006. Permission granted for Answers in Genesis to use this in Answers magazine and on its related websites.)

Previous Article A Foundation of Scripture Next Article Bird Flu