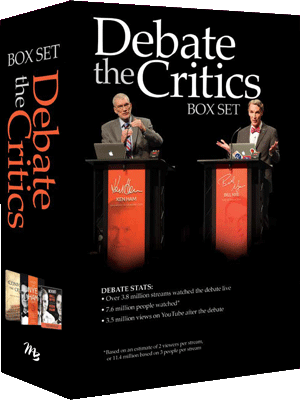 Do you want to witness more effectively or give someone a set of resources to help them consider the truth. This Debate the Critics set would make an excellent gift for someone searching for answers to clarify and build their faith!

For the reader, an old-earth creationist has sent an email about the Bill Nye-Ken Ham debate claiming Mr. Ham lost the debate. The reason for this claim was because we have continued to comment on the debate with books, articles, videos, and so on.

He claims that because Mr. Ham lost the debate, this causes people’s faith to be shaken and, therefore, he recommends an old-earth ministry called Reasons to Believe (RTB), led by Dr. Hugh Ross. Let’s look into this.

Thank you for commenting about the Nye Ham debate. Please see my comments below.

This is one proof you lost the debate.

The debate topic was the following: “Is Creation a Viable Model of Origins in Today’s Modern, Scientific Era?”

Mr. Nye immediately changed the topic to address something else: “Does Ken Ham’s creation model hold up? Is it viable?”

What few realize is that in doing so, Mr. Nye also misrepresented Mr. Ham’s position by claiming Mr. Ham’s model was that natural law changed at the Flood, that Mr. Ham’s model was opposed to science, that Noah’s Ark was like a zoo, that Noah’s Ark held at least 14,000 animals but was supposed to have millions of species, the Bible (specifically Genesis) was written by men only (no God), we oppose scientific predictions, and the list continues. The point is that this false model was a straw man that Mr. Nye set up. In other words, he changed what the creation model really was and attacked a false version of it in the debate, and so he never really addressed the debate topic. And this was the case throughout the debate.

you couldn’t answer nye on your feet,

A few things here. First, with the debate format and time limits, you can’t answer everything. Mr. Nye used the “skeptical method” by the way, which is to throw out numerous arguments, true or false, and hope to deceive people into thinking he won.

The reason for doing this is simple. Many watching the debate will notice that Mr. Ham didn’t answer a particular question, and so it is assumed then that he can’t answer the question, hence viewers may misperceive that someone loses the debate on that account. But it works both ways: neither debater can answer everything they were presented with even in typical debate, let alone when one uses the skeptical method.

Mr. Nye admitted to using this method after the debate. Mr. Nye says the following of a misrepresentation of biblical creationist and debater Dr. Duane Gish:

He was infamous for jumping from one topic to another, introducing one spurious or specious fact or line of reasoning after another. A scientist debating Gish often got bogged down in details and, by all accounts, came across looking like the loser. It quickly occurred to me that I could do the same thing. . . . I did my best to slam Ken Ham with a great many scientific and common sense arguments. I believed he wouldn’t have the time or the focus to address many of them.1

Second, not answering something is not the same as losing a debate. Jesus never answered certain things at his trial, and even though they had Him put to death on the Cross, Christ won (Acts 8:32).

Third, Mr. Nye failed to answer the most basic tenets of debate from his worldview, such as why he thinks logic, reasoning, morality, truth, and knowledge exist in his materialistic worldview. For Mr. Nye to even argue against the biblical position would be to give up his worldview (which cannot account for the existence of logic and reason) and borrow from the truth of God’s Word. In other words, for him to even try to make a case meant he lost the debate! He never answered this after being asked repeatedly to do so.

and so you've spent the last 9 months doing damage control by producing videos—and now a book—answering his objections to young earth creationism.

By the way, Mr. Bill Nye has written a book too. And he has spoken about it and written articles about it since. So have the skeptics in Nye’s camp. Why the double standard?

Besides, what was wrong in the videos and book that we have on this? We are merely adding more insight to the arguments that cannot be raised in the short debate timeframe. In part, this is because people keep asking us for more information on the subjects discussed. So to help them out, we are willing to do this so they will always be prepared to have an answer (1 Peter 3:15).

Also, what is wrong with adding books after the live event to discuss it further? Was God wrong when He did this? God was more than willing to add commentary (the New Testament) after God in the flesh did His live appearance in the flesh. Did Christ lose and the apostles have to do damage control?

On the contrary, because Christ won, the details can now be examined in even more light with subsequent discussion. That is what the New Testament is; the explanation of the life of Christ and the theological implications thereof in written form after the live event!

if you had won the debate, or if you were confident you performed well, you'd simply release the video without editing or exposition and let the chips fall where they may.

Why is it acceptable for you to write a follow-up but not us? That is a fallacious double standard. If you were so confident that Mr. Nye won the debate, then why did you write this subsequent letter trying to argue that Mr. Nye won? Shouldn’t you have just let the chips fall where they may?

Furthermore, by this argument, you would be professing that Christ, when He came in the flesh shouldn’t have had anything other than the Gospels and any New Testament commentary (follow up) on it would be “proof” that Christ lost. Such a position would be absurd for a Christ follower.

Yet we are increasing in support each year. This is mere hand waving. Our mission is to proclaim the absolute authority of God Word. Why would any Christian think this is bankrupt?

—in fact, some people i know, fellow old earth creationists, are now dialoguing with a woman who wrote a book defending YEC [young earth creation]—using mostly AiG materials—and, in light of criticisms of atheists, has now become an atheist.

And I used to hold to some old-earth ideas promoted by Dr. Hugh Ross, but because I couldn’t hold to geological and astronomical evolution in light of God’s Word or to the idea that the order of creation was different, that the old-earth position was not tenable.

The issue was God vs. man’s ideas. The hope would be that this woman would realize that atheists can be wrong but God cannot be.

As long as ministries like RTB exist that mix Christianity with secular humanistic religious ideas like the supposed big bang and millions of years in Genesis, then there will always be a need to help people get back to the authority of God’s Word beginning in Genesis.

especially among young people—once they realize they've been lied to by YEC ministries, they almost inevitably reject the christian faith.

Stats from America’s Research Group show the exact opposite. It was hypocritical Christian leaders who taught things like an old earth, when the kids can read Genesis and not get millions of years out of it, that led to the majority of kids walking away. Please read Already Gone by Ken Ham and Britt Beemer for more about why two-thirds of young people are leaving the church by the time they reach college.

By the way, what lies do you claim we teach?

my prediction is that, within 50 yrs AiG will either become nonexistent or so irrelevant that is practically doesn't exist, or that it will morph into an old earth creationist ministry!

Only the Lord knows. We ask that people pray to keep the ministry of Answers in Genesis a solid biblical authority ministry for years to come. But your prophecy is marked (consider Deuteronomy 13).

for those of you questioning your faith after watching ken ham lose to bill nye,

First, Mr. Nye didn’t win because he never addressed the debate topic. For those deceived into thinking that Mr. Nye won even though he never addressed the debate topic, we invite you to read the Bible (you can get an overview with Begin) and realize that God is never wrong, but people can be. It is a matter of faith in either fallible, imperfect men about the past or a perfect, infallible God.

Meanwhile, we’ve been praising the Lord for the many testimonies of people whose faith has been strengthened after watching the debate.

i encourage you to log onto [the Reasons to Believe website] for real answers to science-faith issues!

For those reading, Reasons to Believe believes that the secular interpretations of nature are equal to Scripture. Often times, they are used to supersede the plain reading of the Bible, particularly in Genesis in favor of the secular world’s ideas like the big bang.

The president of RTB, Dr. Hugh Ross, has made the claim in his book Creation and Time that nature is likened unto the 67th book of the Bible and should be trusted as such.2 He has reiterated this. If you read the Charisma article by Andy Butcher, “He Sees God in the Stars” (June 2003), you’ll find that Ross still agrees with this principle of adding to Scripture. The principle can even be found in his more recent book A Matter of Days.

RTB also agrees with astronomical evolution (big bang) and geological evolution (millions of years), which are tenets of the religion of humanism. They also believe the Flood of Noah’s Day was local and not a global, world-covering event (see, for example, Genesis 7:19–20).

We want to encourage RTB to get back to the authority of the Bible from the very first verse. When we read the pages of Scripture, the whole creation is corrupted due to sin (e.g., Romans 8:22), the ground has been cursed (Genesis 3:17), the Curse has not been removed yet (Revelation 22:3), and our fallen and sinful natures often err when trying to properly understand this sin-cursed and broken world.

So why treat nature on par with the 66 books of the Bible? Instead, the Bible should be used to supersede our fallible interpretations of nature, particularly the past.