How Sir Francis Bacon ‘unlocked a door’ that has been pushed open in generation after generation. The result today in our Western world is a weakened church.

In Part 1 (Bacon vs Ham), the authors discussed the influence of the philosophy of Sir Francis Bacon on people’s thinking.

In this part, I want to briefly illustrate how Bacon “unlocked a door” that has been progressively pushed open in generation after generation. The result today in our Western world is a weakened church. For instance, among US teenagers today who call themselves born-again Christians, only 9% believe there is such a thing as absolute truth!1

When one considers nations like the United Kingdom, America, Canada, New Zealand and Australia, there is no doubt that these cultures were once much more Christian (e.g. their morality) than they are today.

Consider the USA. In our modern era, this country has certainly been the greatest Christian nation on Earth. It still has the greatest number of churches, Bible Colleges, Christian colleges, seminaries, Christian radio and TV stations and Christian bookshops in the entire world. More than half of the world’s missionaries are sent out from America.2 And yet, for all the Christian influence within and emanating from this country, the culture is becoming less Christian (in fact more anti-Christian) every day.3 I believe the church progressively adopted “Baconian” philosophy, thus leading to this situation.

In John 3:12, Jesus states the following: “I have spoken to you of earthly things and you do not believe; how then will you believe if I speak of heavenly things?” Let me apply this verse in a particular way—if one can’t believe the earthly things spoken of in the Bible (e.g. the history in Genesis, which encompasses biology, geology, anthropology, etc.), then how can one believe the spiritual things (e.g. morality and the message of salvation) which are based in this “earthly” history? 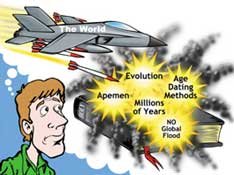 One reason the genealogies are listed in such detail in various parts of the Bible is to help teach us the real history beginning in Genesis (including the first Adam and the origin of sin and death), and going through to the “last Adam” (1 Cor. 15:45—the Lord Jesus Christ, the Son of God, who stepped into history to save us from our sin).

If the record of this history can’t be trusted, neither can the message of morality and salvation that is based in this history. If there was no literal first Adam and Fall (Original Sin), and death as a consequence, what is the meaning of the “last Adam” and His death and Resurrection? If God’s Word is not infallible, then He is not the absolute authority. Who therefore determines absolutes concerning morality?

By and large, much of the church has adopted the spiritual teachings of the Bible (the message of morality and salvation), but has rejected a significant amount of its history. The Bible is, to most, a book of stories containing important “truths”. But the history (particularly in the early chapters of Genesis) is not important—or even real.

Consider the following conversation, which represents many I have had with audiences in the USA, UK and Australia.

I ask them, “If I were to ask the average Sunday school teacher this question: ‘In Sunday school, do you teach biology, geology, astronomy, anthropology and chemistry?”—what would the answer be?”

The audience responds, “No.”

I then ask, “If I asked, ‘What do you teach in Sunday school then?”—what would the teacher say?”

The audience replies, “About Jesus—about the Bible.”

I then continue, “OK, now if I asked: ‘Where do students learn about biology, geology, astronomy, anthropology and chemistry?”—what would the Sunday school teacher say?”

The answer I receive is always a resounding, “At school!”

And my response? “Oh, I get it. At Sunday school (in fact in most church programs) we teach about Jesus and the Bible, but at school, students learn about geology, biology etc.” I explain that statistics show that 80–90% of students from church homes in America (probably a higher figure in other countries) still go to government schools.4 The Barna Research Group estimates that nearly 70% of teens and young adults from churched homes leave the church upon leaving home.5

Why is this so? What is happening? It basically is like this. At church, students (and adults) are taught about Jesus and other stories (Jonah and the great sea creature, feeding the 5,000, Paul’s missionary journeys, etc.), whereas at school, they are taught what they have been increasingly led to believe is the real history of the world in regard to geology, biology, astronomy etc.

This “real” history the world teaches encompasses such things as: the Earth is billions of years old; man evolved from ape-like ancestors; the Bible has nothing to do with science; the “big bang” brought the universe into existence; the evidence of animals changing (by mutation and natural selection) supports the theory of molecules-to-man evolution; the Bible teaches religion, but schools teach real science, etc.

In other words, the reality is that progressively, generation after generation, students have been conditioned to see the Bible as something that deals with morality and salvation, but what they are taught at school deals with “real” history.

But the history recorded from the beginning in the Bible does involve issues of biology, geology, astronomy, anthropology and chemistry. Now, the Bible is not a science textbook (which is a good thing, since science textbooks change every year!). But the Bible is a revelation of history that gives us the “Big Picture” in every area of reality. In other words, the Bible gives us the right foundational thinking so we can approach geology, biology, anthropology, etc. in the correct way.

The Bible informs us that death entered the world after sin. This has a bearing on geology and paleontology, as the Earth is covered with rocks full of fossils—dead things. Thus the fossil-containing rocks could not have formed before sin. The Bible records the event of a global Flood—this has a great bearing on correctly interpreting the surface of the Earth and the massive quantity of sedimentary rocks, as well as explaining the formation of most fossils.

Now consider this: the world (through the schools and secular media) teaches that there never was a global Flood, and that death has been here since the beginning of life, eons ago. Thus, they think, the Bible’s geology must be wrong!

The Bible teaches that God made the first man from dust, and that all people are descendants of one man—thus there is only one human race. But, the world teaches that the various races of people evolved from some ape-like ancestor millions of years ago. Thus, the Bible’s anthropology must be wrong, they think.

The Bible teaches that life-forms came into being, fully functioning, at the will of an infinite Creator, who must thus have also provided the code system for life (DNA and its translation machinery). The world teaches that matter by itself produced such a code system. Thus, they think, the Bible’s chemistry must be wrong.

The influence of “Baconian” philosophy has progressively caused the church to disconnect the Bible from the real world—it is relegated to a book of stories, albeit with wonderful teachings about salvation and morality.

Ancient Bible accounts such as that describing the global Flood fit well with evidence found in the world. Basing our science on this reliable document of history provides a solid foundation for our research and inquiry into the past.

As this thinking permeated generations of students (including those who became pastors, seminary professors, mission leaders, etc.), a “door” was pushed open further with each generation. This “door” was the one Francis Bacon had unlocked—that the Bible really has nothing to do with science. Each generation, though, became more and more consistent—if the Bible’s history is not true, how can the rest of it be true? If the earthly teachings can’t be trusted—how can the spiritual teachings be believed?

The result today is that increasing numbers of people no longer see the Bible as relevant, and so they reject its morality and salvation. The church is telling people, “Trust in Jesus”, “abortion is wrong”, “homosexual behaviour is wrong”, etc. but, more and more, people don’t listen, because the message of Jesus and morality that the church is preaching comes from a book that, in their minds, is not trustworthy!

This is summed up by actor Bruce Willis, who stated in a newspaper interview: “… with what we know about science, anyone who thinks at all probably doesn’t believe in fire and brimstone anymore. So organized religion has lost that voice to hold up their moral hand.”6

For the church to be successful, it needs to give up the world’s false history (thus, give up “Bacon”) and return to the true history recorded in the Bible.

And yes, this means the church must start teaching some aspects of geology, biology, anthropology, etc. in its sermons, Bible classes and other church programs. Christians need the “big picture” of history, so that they and future generations of believers have the right foundation to correctly understand the universe and life.