The sad thing is that apathy about Genesis and origins by the Church has meant that the world-view of society's leaders and opinion-makers is thoroughly evolutionized.

At a dinner for the America’s Cup yacht crews in Newport, USA, put on by the Australian Ambassador on September 14, 1962, the then US President John F. Kennedy said:1

‘I really don’t know why it is that all of us are so committed to the sea, except I think it’s because in addition to the fact that the sea changes, and the light changes, and ships change, it’s because we all came from the sea. And it is an interesting biological fact that all of us have, in our veins, the exact same percentage of salt in our blood that exists in the ocean, and therefore, we have salt in our blood, in our sweat, in our tears. We are tied to the ocean. And when we go back to the sea—whether it is to sail or to watch it—we are going back from whence we came.’

‘But above all we are oxygen (61 percent) and hydrogen (10 percent), fused together in the unique molecular combination known as water, which makes up 71 percent of the human body.

So when environmentalists assert that we are, after all, part of the earth, it is no mere rhetorical flourish. Our blood even contains roughly the same percentage of salt as the ocean, where the first life forms evolved. They eventually brought onto the land a self-contained store of the sea water to which we are still connected chemically and biologically. Little wonder, then, that water carries such great spiritual significance in most religions, from the water of Christian baptism to Hinduism’s sacred water of life.

However, this common belief about the percentage of salt in our blood is just plain wrong. If the percentages were similar, it would still not carry much weight as logical proof of evolution. But ironically, the concentrations of the various salts in seawater and blood are in fact all quite different. 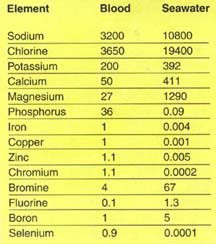 The sad thing is that apathy about Genesis and origins by the Church has meant that the world-view of society’s leaders and opinion-makers is thoroughly evolutionized. Little wonder that Christians in the USA, despite constituting a substantial percentage of the population, are increasingly frustrated at their inability to influence the moral direction of their culture.

They need to see that the real battle is at the foundational level; in rejecting the authority of God’s Word, the Bible, people are rejecting God’s authority over their lives.

US President Bill Clinton is no less evolutionized than the other politicians referred to above. So, not surprisingly, one of his highest priorities in office has been the liberalizing of laws on abortion and homosexuality, ardently supported by his Vice President, Gore.

Ironically, a recent statement by Clinton, affirming the truth that all people are of ‘one blood’3, unwittingly affirmed the truth of the Bible’s history of mankind. In his January 27, 2000 State of the Union address, President Clinton said:

This Fall, at the White House, Hillary had one of her millennium dinners, and we had this very distinguished scientist there, who is an expert in this whole work in the human genome. And he said that we are all, regardless of race, genetically 99.9 percent the same.

Having all descended from Noah’s family only a few thousand years ago, all people are much more closely related genetically than evolutionists previously imagined possible.