Countering the Year of Darwin

In 2009, Darwin’s psychophants will be hyping their hero, even in churches. But AiG has a host of conferences planned that will deflate the evolutionary zeal.

Our teaching seminars are not just held in the comfort of nice auditoriums. Another learning experience is designed for the more adventurous creationists: several days riding a raft on the Colorado River and through the heart of Grand Canyon in northern Arizona. Three such whitewater rafting trips will be held next year, with multiple hours of talks on Flood geology being presented (with one trip also featuring astronomy programs at night). But hurry, because two events have already sold out!

After the success of our national conference in Branson, Missouri, this past summer (which was a wonderful time of teaching and fun for the 2,000 people who attended), AiG is setting its sights on 2009—but this time with three major national meetings to attend.

AiG–U.S. has made the final arrangements for our two Answers for Darwin conferences that will be held next February to coincide with the 200th birthday of Charles Darwin that month, when evolutionists around the world will be celebrating their hero, including many people celebrating Darwin in their churches. How could that be?

As we prepared this article, over 800 congregations in all 50 states (and 9 countries) were already preparing to celebrate what’s called “Evolution Weekend” in mid-February. Are you also aware that nearly 12,000 members of the Christian clergy in the U.S. have signed on to what’s called the “Clergy Letter Project,” which denies God’s Word and endorses evolution by declaring that “We believe that the theory of evolution is a foundational scientific truth . . . .”? So, it’s time that you prepare yourself to better defend and share the Word of God next year with a lost and dying world. 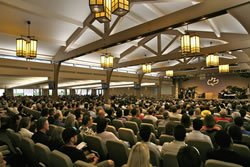 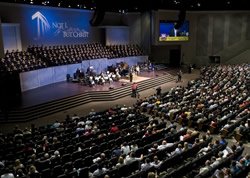 AiG will be at the original Calvary Chapel church (Calvary Chapel Costa Mesa) in California February 6–7 (a Friday and Saturday) with what we are calling an “Answers for Darwin” conference. This is the church that was founded by Pastor Chuck Smith in the 1960s, and since then, over 1,300 Calvary Chapels have followed and are part of a loose affiliation of churches. This meeting will feature Ken Ham, geologist Dr. Andrew Snelling, and biologist Dr. David Menton.

Then, in a few days, AiG will head cross country to Thomas Road Baptist Church in Lynchburg, Virginia, February 15–17 (Sunday–Tuesday), where Ken and Dr. Snelling will join Dr. David DeWitt and Dr. Marcus Ross (both of Liberty University) for three evenings of teaching and encouragement. This is the church founded by the late Jerry Falwell. His son Jonathan (the new pastor) has graciously opened his doors to AiG for this national conference.

These West Coast and East Coast conferences are specifically designed to equip you with the answers and resources you need to effectively share the truth of God’s Word with a world that is increasingly turning its back on Him. And because Darwin will be “everywhere” next February, you need to be able to answer the questions posed by your friends (and maybe even some family members) about evolution during that time. Get equipped at these faith-building conferences.

There is no charge for either of these important conferences. You can use that savings toward gas and lodging for the event.

Our third conference for 2009 is Creation College III. Back by popular demand, this multi-track, four-and-a-half day conference will strengthen your faith and teach you how to answer the most-asked questions about the Bible. Beyond that, many participants will enroll in a special track to learn how to organize and prepare their own creation presentations to share with others in Sunday school, church, or elsewhere.

With three tracks—general apologetics, in-depth science, and presentation skills—you will come away fully equipped and ready with answers for a skeptical, non-believing world.

This Creation College will be held July 20–24 at Lakeside Christian Church in northern Kentucky. Located right off I-75 and just south of Cincinnati, Ohio, the venue is only 12 highway miles from our Creation Museum. Time will be set aside for students to visit the Creation Museum (a ticket is included in the price of attending the college).