A Tale of Two Graves

Having read about the great revivals of generations ago in Britain, I was shocked the first time I visited that country to realize there was hardly a vestige of biblical Christianity in public life.

The Christian consensus that had once swept this great nation had by and large disappeared.1

For instance, thousands once attended a church at Bristol. Now the tiny congregation meets in the foyer.

At one pastors’ meeting, I met a man whose job in his denomination was to decide who could use the unused church buildings. One day, as I walked towards London’s Westminster Abbey, I was aghast to see a sign on a building for the office of the ‘Advisory Board for Redundant Churches’.

Yet, Moslem mosques seem to be going up at an alarming rate. Eastern religions seem to be thriving. Secular humanism has taken over the nation. The same problems that are now besetting the United States and Australia are rampant in Britain—homosexual behaviour, abortion, pornography, etc. The Church seems to have lost its influence. The absolutes of Christianity have largely disappeared.

Britain is not the nation it used to be in world affairs either. It was said in the past that Britain ‘ruled the waves’. Now it is more likely to be said that Britain ‘waives the rules’—the majority have rejected the God of the Bible.

We read in Judges 21:25, ‘In those days there was no king in Israel: every man did that which was right in his own eyes.’ Because most people in Britain have rejected the King of creation, they have rejected His rules.

How did this happen? When you think of the great revivals under Wesley, Whitefield and others, how could things disintegrate in Britain to what they are today? A tale of two graves tells the story and should stand as a warning to all nations.

When the man who popularized evolutionary ideas—Charles Darwin—died, his family wanted him buried in the local churchyard. However, biologist Thomas Huxley—who ardently ‘preached’ humanism to large crowds—wanted Darwin buried at Westminster Abbey, that great church opposite London’s houses of Parliament.

Many famous men and women (including kings, queens, and scientists) are buried in this exquisite church building. Huxley, known as ‘Darwin’s bulldog’, realized that if the church were to honour Darwin, this would help popularize Darwinism.

At Westminster Abbey, I could not find Darwin’s grave, so I asked an attendant. I found that I had been walking over it. Darwin was buried in the floor (the foundation) of the church.

What a picture! As the Scripture warns, ‘If the foundations be destroyed, what can the righteous do?’ (Psalm 11:3). Darwinian evolution, with its teaching of death and bloodshed millions of years before man evolved, is a direct attack on the foundations of Christianity and its teaching that death and bloodshed are a direct result of the sin of Adam (Genesis 2:17; Romans 5:12; Romans 8:20; 1 Corinthians 15; Revelation 21:4).

After visiting London, I travelled to Scotland. While walking, I saw a statue of John Knox, who had led the Protestant Reformation in Scotland in the sixteenth century. This man was a fiery preacher. He was one of the most influential Scots of his day. He certainly had a colourful history, but he stood for the authority of the Word of God.

In his later years, Knox preached at St Giles’ Cathedral, in Edinburgh. I visited this cathedral. At the midday service, the clergyman told us a number of times, ‘Pray to find the god within you.’ This New Age message was not the message John Knox preached!

Having read that Knox was buried near the church, I asked an attendant where Knox’s grave was situated. She answered, ‘I do not know’. 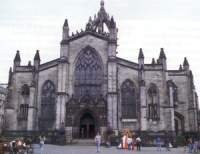 Outside, I asked a parking attendant, ‘Do you know where John Knox is buried?’

I and my travelling companions went over to car space 44, and looked under a car for the grave marker. A small yellow tile with no name on it marked the spot where Knox is believed to be buried. His initials are engraved on the window of the church opposite car space 44.

As I pondered this, my thoughts went back to Westminster Abbey. A man who popularized an idea that attacks the very foundations of the Church, is honoured by a church and buried in a prominent place for the world to see. Yet, a man who stood for the authority of the Word of God is all but forgotten, and his grave is housed in a parking lot.

The church adopted Darwin, and trampled on the Word of God. This is what has happened to Britain. It has spread to the rest of Europe and around the world.

In the United States and Australia, Christians are shocked at the alarming rate at which humanism is spreading. What is happening? The majority of the Church has adopted Darwinian evolution. What happened in Britain is happening in America and Australia.

Oh, how our nations need to heed the cry of Hosea, ‘Hear the word of the Lord … for the Lord hath a controversy with the inhabitants of the land, because there is no truth, nor mercy, nor knowledge of God in the land’ (Hosea 4:1).