Last week, a film crew for the evening TV news program Nightline on ABC was here–doing a story on the film Creation (which is really about evolution–it’s a drama on Darwin’s life), which opens in U.S. theaters on January 22. It had a run in UK theaters during “The Year of Darwin” (2009 was the 200th anniversary of Darwin’s birth).

In light of the Creation film, ABC wanted to get our perspective on Darwin’s life and how controversial he was. The interview lasted 25 minutes, and then the crew filmed me in different parts of the museum.

You may recall–from reading my blog a few months ago—that the star of Creation is the actor (seen in The Da Vinci Code, Master and Commander, etc.) Paul Bettany. He and two colleagues (one of them is the well-known British writer A.A. Gill) toured the Creation Museum in June. 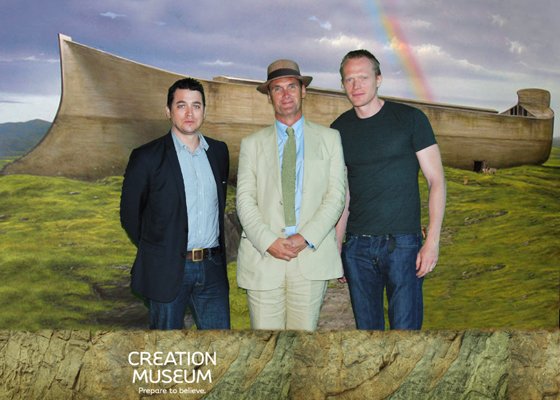 In the photo, Bettany is at the right, and Gill in the middle. Gill is the author of a Vanity Fair magazine article due next month on our museum and the new Darwin film, and Bettany–who came to the museum with an expensive camera—is supplying the photos for the Gill piece. Gill is an atheist, which makes us doubt his article will be complimentary—but perhaps the photos of our museum will turn out well!

A staff member at our sister ministry in the UK–who saw Creation last year—helped us write a review of the film.

As soon as we know when the Nightline interview with me is aired on ABC-TV, we will post that info on this website. Here is a photo of the video crew interviewing a museum visitor–from Canada–about his thoughts regarding Darwin. 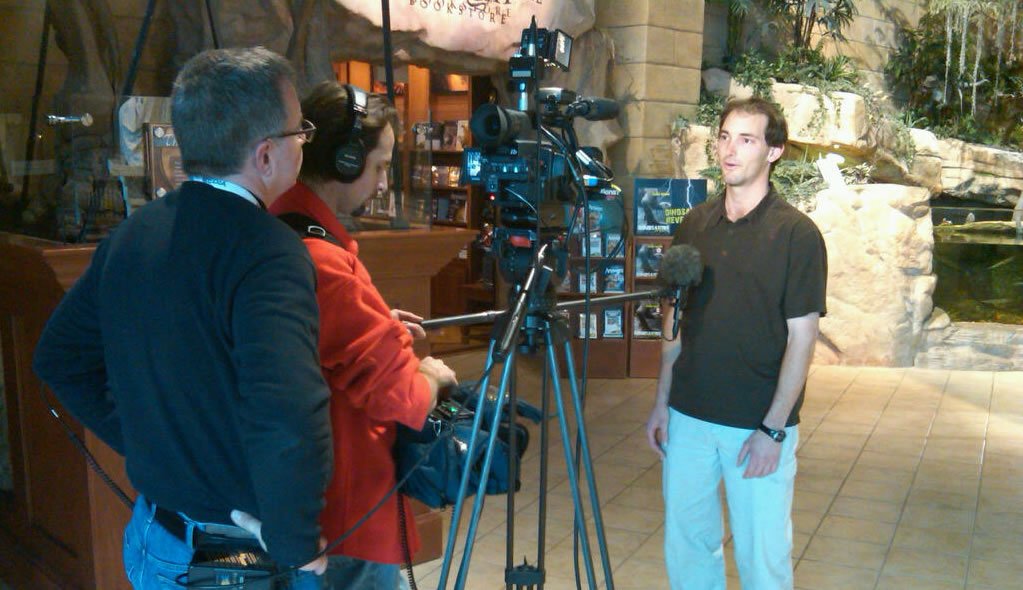 When we read Gill’s upcoming Vanity Fair article, we will comment on it.

I just learned this morning that in the current edition of New York magazine (the January 10 issue of this weekly magazine), Bettany mentions his visit to the Creation Museum and called the museum (as he has done before) “bananas.”

Outreach Kicks off for 2010

Many of AiG's speakers were out on the road this past weekend speaking in churches, conferences, etc. The first Answers Conference with Dr. David Menton (who had just been in Wyoming), Dr. Jason Lisle, and I began yesterday at Christ’s Church in Mason, Ohio (northern Cincinnati). We finish up tonight with presentations by Dr. Jason Lisle and me. (see AiG’s online web calendar for details).

It was exciting to see a packed auditorium yesterday morning and evening for the first presentations. Here are some photographs taken at the event:

2. Senior Minister Tom Moll and me 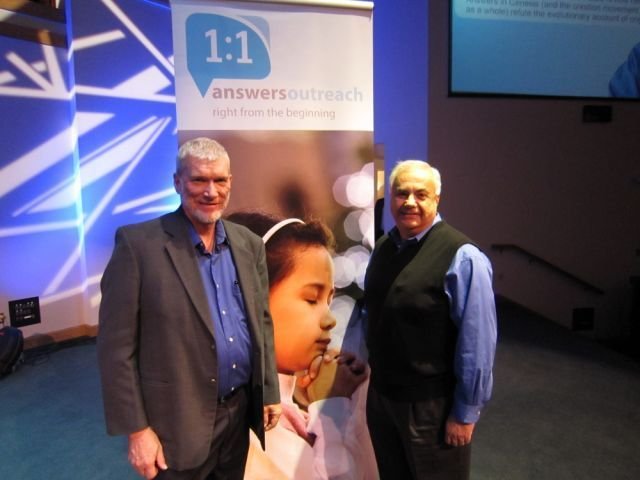 3. Two officers from the local Creation Research, Science Education Foundation: Bob Moak, vice president, and Paul McDorman, president (both have supported AiG since we first moved to the area over 15 years ago). You can find out more about this local supportive creation group on their website. 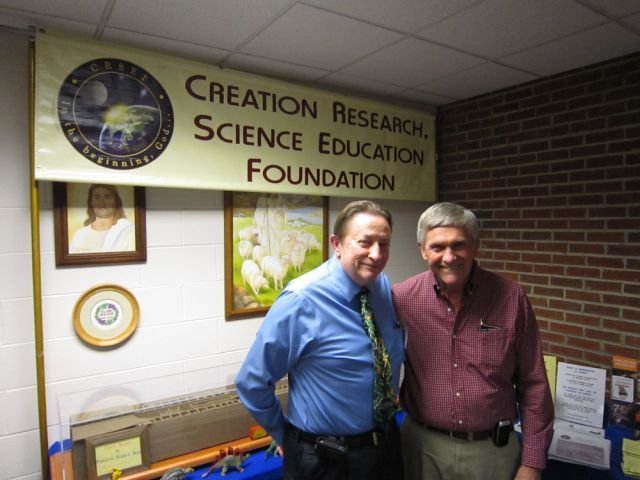 4. I’m giving one of the presentations 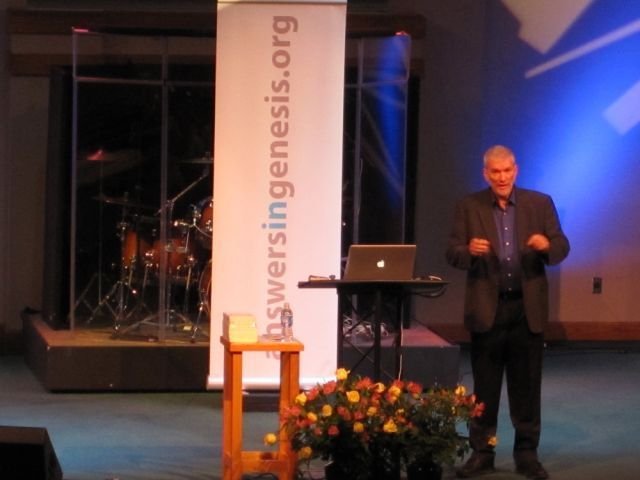 6. Answering questions in the lobby 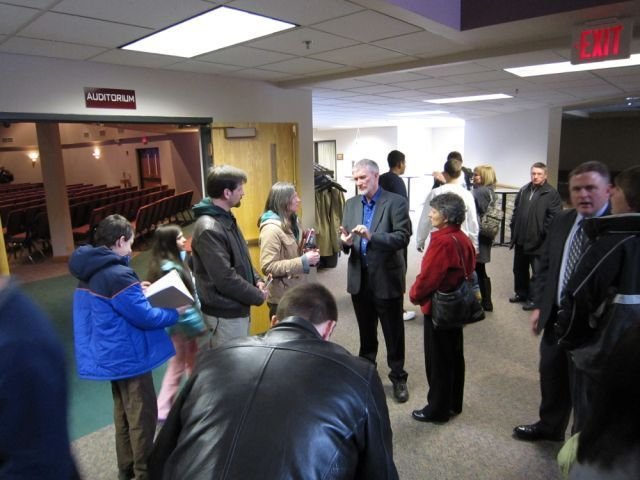 7. People crowded around the resource tables 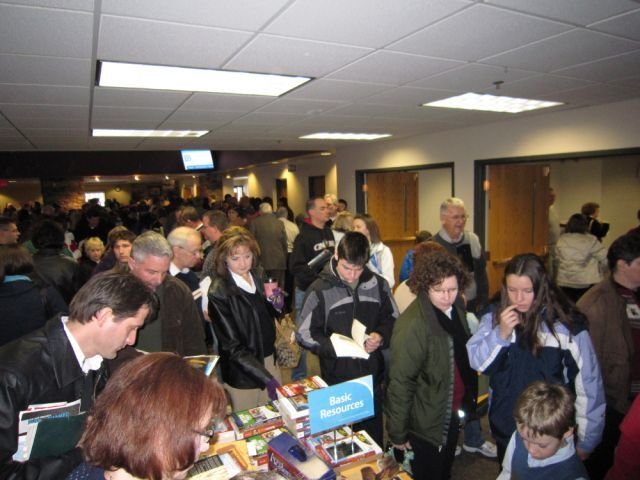 It was thrilling to see a number of different churches represented for the various programs—an entire youth group from one church, an entire Sunday school class from another, etc.

Please pray for our speakers as the Answers Outreach ministry begins in earnest for 2010.

“And the inhabitants of one city shall go to another, saying, Let us go speedily to pray before the LORD, and to seek the LORD of hosts: I will go also.” Zechariah 8:21

We are revived when, instead of thinking of every little thing we have to do before our daily devotions, we say with a contagious enthusiasm, I have to race to prayer. Thanks for stopping by and thanks for praying, Ken