Creation in the Making

Preface: As the new Charles Darwin biopic Creation is released in U.S. theaters today, we are re-posting our movie review that first appeared in September on our website. The review was composed after the film premiered in the UK. With the assistance of Paul Taylor of our sister AiG office in Leicester, England, as well as Prof. Andy McIntosh, who both saw Creation, we posted the following movie review. Interestingly, the actor who portrays Darwin is Paul Bettany, an avowed atheist who also stars as the Archangel Michael in an apocalyptic action film that is being released today as well, Legion. 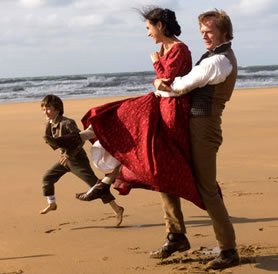 The just-released film on Darwin called (curiously enough) Creation features the clash between religion and evolution, set against the backdrop of family suffering and death.

The tension between evolution and religion as it played out in the Darwin household is dramatized in a new film.2 With the provocative and arguably offensive title of Creation (originally called Origin), the movie not only presents how Darwin lost his remaining Christian beliefs, but also offers an account of his family life, particularly the death of his young daughter Annie. Her death was such a tragic event in Darwin’s life that he soon lost any vestige of his beliefs regarding Christianity. The tension of having a very religious wife (a Unitarian) only complicated matters, as Darwin wrestled over the question of why there is suffering and death in this world if there is a God. In fact, Annie’s death in 1851 became the bleak backdrop to the writing of his book On the Origin of the Species by Means of Natural Selection (1859), which the film recreates.

In the Origin book, Darwin wove death into the fabric of his evolutionary story as a part of his proposed process for onward-and-upward evolution. He thus depicted death (ironically) as an integral part of life, which is in complete contradiction to the Bible’s teaching that death is an enemy and an invader into creation (as the result of Adam’s rebellion; 1 Corinthians 15:26; Genesis 3). As the film shows, the death of Annie destroyed Darwin’s remaining belief in the Christian faith. As two of his biographers have noted, the death of Annie “chimed the final death-knell for his Christianity. . . . Charles now took his stand as an unbeliever.”3 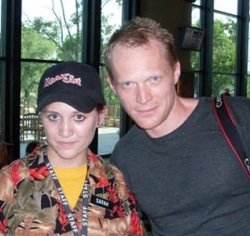 One of our staff members (Sarah) recognized Darwin actor Paul Bettany when he visited our Creation Museum last June and had her picture taken with him.

The film Creation, which some people take to refer to both the creation of the Origins book and the creation/evolution controversy, stars Paul Bettany, who is best known for his roles in popular movies such as The Da Vinci Code (where he played the assassin monk), Master and Commander, and A Beautiful Mind (in which he won the London Film Critics’ Award for Best British Actor). In Creation, he co-stars with his Oscar-winning wife Jennifer Connelly. (Bettany, by the way, visited our Creation Museum in June—see photo.4)

Creation, based on the book written by Darwin’s great-great-grandson and entitled Annie’s Attic, is a secular hagiography of Darwin, which is not surprising given that modern films have a proclivity towards themes that fly in the face of biblical teachings. Bettany is an atheist himself and calls Darwin “a hero of mine and I think in the absence of Jesus, he’s a really useful hero to have.”5

British creationist Prof. Andy McIntosh, a professor at the University of Leeds who wrote to us in a personal capacity and who has seen the film,2 shared that Creation is well produced and generally accurate historically. Prof. McIntosh does point out, however, that as with the typical biopic of today, artistic license is taken. States Prof. McIntosh: “There is a constant reference to Anna’s ‘ghost’ in the movie. Darwin is seen as driven by her voice and memory to publish all his work. Fictional as well are the depictions of the struggle between Emma’s desire for her husband not to publish and her finally acquiescing to it.” Apparently Emma had problems with what her husband was writing, but she was not as belligerent about it as the film shows.

There are anti-Christian scenes played out in the film (above the obvious creation/evolution debate) that are probably fictional and are hits against Christianity. There is a scene, for example, in which Annie is chastised and harshly punished by a pastor for believing in dinosaurs; that is a frequent but false charge made by evolutionist critics of biblical creationists even today: that many Christians believe that dinosaurs never existed and that God may have placed their bones in the ground to “test their faith.” In fairness, the film does show a man anguished over the potential of his book to shake people’s faith in God, and that sentiment of Darwin’s apparently was true in real life.

Also on the positive side, Darwin comes off as a strong family man in the film, which, by all accounts, he was. Portraying this side of Darwin is probably an intentional P.R. white-washing by the producers of a man whose beliefs had unintended disastrous consequences on the world (e.g., fueling racism, violence, etc.). Evolutionists often claim that biblical creationists look upon Darwin as something of an evil man, but except for a few isolated quotes from creationists, that is a view not promoted by the leading creationist organizations. At the same time, we don’t hesitate to discuss the evil fruit of evolution thinking—see, for example, The “Evolutionizing” of a Culture.

The film does not shy from the fact that Darwin was not an originator of the concept of evolution. Creation depicts how Alfred Russel Wallace, independent of Darwin and through his own research abroad, had also come up with the idea of evolution through natural selection. When Darwin discovers this (as the movie shows), he sets aside twenty years of procrastination and rushes to get Origins to the printer. By the way, Darwin’s grandfather Erasmus was already a believer in evolution, and naturalistic views of evolution go back to the ancient Greeks.6 For a critique of natural selection’s ability to turn molecules into men, go to: Is Natural Selection the Same Thing as Evolution?

Written with a backdrop of Darwin’s family misfortunes, On the Origin of Species is essentially a book on the history of death. As Darwin wrote towards the end of the book: “Thus, from the war of nature, from famine and death, the most exalted object which we are capable of conceiving, namely, the production of the higher animals, directly follows.”7

From his evolutionary perspective on the origin of life, Darwin recognized that death had to be a permanent part of the world. Undoubtedly, he struggled with this issue as he sought to reconcile some sort of belief in God with the death and suffering he observed all around him (especially with Annie) and which he believed had taken place over a very long time that was well outside the biblical timeline of 6,000 years. His personal struggle over why there could be so much death in the world if there was a God came to a head with Annie.

What the Bible says about Death 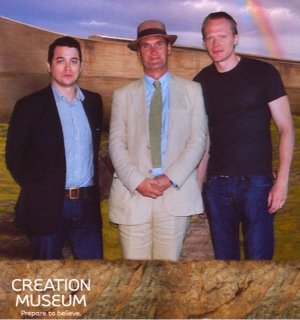 A good-natured Paul Bettany (far right) posed with his traveling companions for a photo inside the Creation Museum. We later learned that the man in the hat is the well-known British writer A.A. Gill, an atheist who wrote a highly mocking review of our Creation Museum that appears in the February 2010 issue of Vanity Fair magazine (coinciding with the release of Bettany’s film).

From a reading of Genesis and accepting it as a straightforward, literal history of the world’s beginnings, there was once a perfect world (“very good”; Genesis 1:31), but through Adam’s rebellion the creation became corrupted. As a consequence, death entered the perfect world (Romans 5:12). The apostle Paul described death as an interloper, calling it the “last enemy” (1 Corinthians 15:26).

Ultimately, then, the battle between creation and evolution is a struggle between two different histories of death and where humankind is going. As Christians, we have hope in a risen Christ who conquered death so that one day we can be with Him where there will be no death:

“And God shall wipe away all tears from their eyes; and there shall be no more death, neither sorrow, nor crying, neither shall there be any more pain: for the former things are passed away” (Revelation 21:4).

Now, if a Christian accepts a history of death over millions of years, what does he or she do with the teaching that everything God had made was “very good”? “Survival of the fittest” would mean that suffering, disease (e.g., TB), and death—represented in the fossil record—were also “very good.” The true history of death, as understood from a straightforward reading of Genesis, enables us to recognize a loving Creator who hates death, an enemy.

For more in-depth teaching on why a loving God allows suffering and death, go to Why Does God’s Creation Include Death and Suffering?. To watch an excellent “docu-lecture” on the life and impact of Darwin, order Dr. Tommy Mitchell’s new DVD: The Evolution of Darwin: His Life.