Why Do So Many Birds Fly in a V Formation?

Why do so many birds fly in a V formation? Is it a matter of safety in numbers, an energy saving maneuver, or just a good way to keep a more navigationally astute leader in sight? The aeronautical adjustments required to maximize the energetic advantages of the V formation are remarkably complex. A study of northern bald ibises just published in Nature shows, however, that birdbrains can keep up and perhaps teach a few aerodynamic lessons themselves.

The first confirmation that birds were really saving energy by flying this way came a few years back when pelicans following in formation were shown to have lower heart rates than their lead bird. Airplane pilots and even racing cyclists taking advantage of each others’ wakes use these same basic principles. However, the adjustments required of flapping birds far exceed those needed to fly fixed wing aircraft.

A conservation program to reestablish the northern bald ibis in Europe provided the participants for this project. The birds were hatched at Zoo Vienna and raised by human foster parents. Fourteen birds, following their human flock-leader’s microlight aircraft, learned to fly in V formation along the traditional migratory route between Orbetello, Italy, and Salzburg, Austria. The birds were fitted with tiny GPS data-loggers able to record not only the precise speed and position of each bird relative to others in the formation but even its flapping speed. The data retrieved at the end of each flight revealed each bird’s ability to continuously tweak the speed and phase of its flapping and to make precise spatial adjustments on the fly. 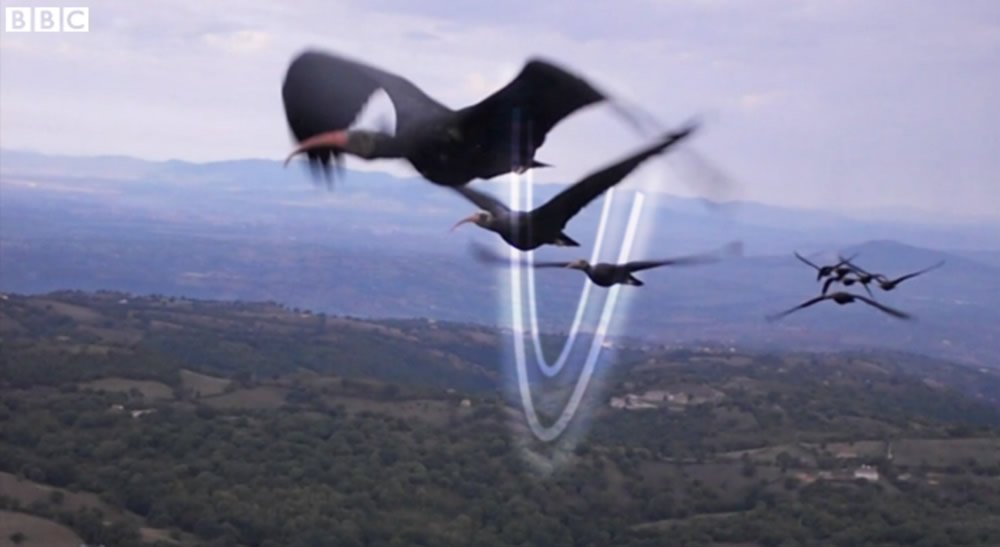 Superimposed on this video image of ibises in flight is a curve showing how air pushed down by a flapping wing creates a downdraft and then an updraft affecting other birds. Birds must be precisely positioned relative to their neighbors throughout the flapping cycle to avoid the downdraft and take advantage of the updraft. Be sure to watch the entire video to see these birds in flight and learn more about their aerodynamic acumen. Image: Screen shot from BBC video in which Steven Portugal explains his study published in Nature.

“They're seemingly very aware of where the other birds are in the flock and they put themselves in the best possible position,” explains lead author of the study, Steven Portugal of the Royal Veterinary College. As the birds fly, they push air down and consequently create a nearby updraft of upward-moving air. Perfectly positioned birds can theoretically save energy by piggybacking on the lift provided by the updraft from the bird ahead of it. “This can give a bit of a free ride for the bird that's following,” Portugal explains. “So the other bird wants to put its own wingtip in the upwash from the bird in front.”

If positioned poorly, however, a bird will be pushed downward by the other bird’s downdraft. “Downwash is bad,” Portugal says. “Birds don't want to be in another bird's downwash as it's pushing them down.” The lead bird of course accrues no advantage from its position. Accordingly, the ibises take turns being in the lead.

Doing the Wave with a Shift

For maximum efficiency, each bird in the flock must time its flapping to keep its wings in the next bird’s updraft throughout the flapping cycle. Each ibis continuously senses the oscillating waves of air created by the formation and adjusts accordingly. Beyond that, each must adjust its flapping instantly to conform to the aberrations created by an off-beat neighbor.

“When the flock got it right,” Nature.com reports, “each following bird delayed its wingbeat by just enough to spread a wave of synchrony through each arm of the V. When they got it wrong and a following bird drifted directly behind the bird in front, the follower registered the problem and adjusted the timing of its flaps so that it did not become tangled in the powerful downdraught of the same vortex.”1 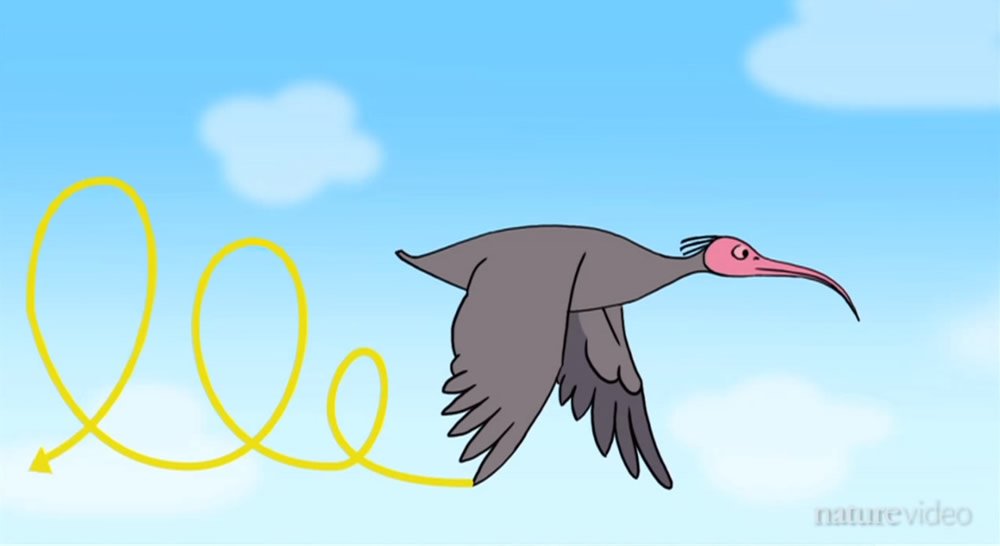 This illustration is from the Nature Video “Come Fly With Me.” Vortices of air spin off of the flapping wings, creating constant challenges for each bird’s neighbors. Be sure to watch the entire video at “Come Fly With Me.” Screenshot from NatureVideo.

“Fly with a Little Flap from Your Friends”2

We marvel at the innate ability of these ibises to accomplish a feat that human pilots would find challenging.

“For an aeroplane pilot, keeping one wing precisely within the small upwash region of a leading plane’s tip vortex is tricky enough, but for a bird the problem is further complicated by the flapping wings of its neighbours, which create tip vortices that undulate up and down,”3 write biologists commenting on the study in Nature. “A bird that is following another bird must carefully adjust its own flapping motion, not in perfect temporal synchrony with the leader, but rather at a precise phase lag that tracks the tip vortex as it oscillates. When flying most efficiently, all the birds in a formation should flap with a precise metachrony (a wave-like synchrony), such that the flapping phase changes systematically from the leader to each bird down the line.”4

Knowing that these aerodynamics were theoretically desirable for maximum efficiency and proving that birds could achieve them, however, were two different things. Experimentally demonstrating what birds are accomplishing as they fly has required the application of 21st century technology including lightweight devices that can recycle tracking data much faster than the iDevices many of us carry.

Vortices of air spinning off the tip of each bird’s wing vary in strength throughout the wingbeat. These ibises adjusted their position and flapping phase to obtain the best possible lift from the vortices being generated with each flap from each neighbor. The alignment of the birds in multiple directions continually alters the optimal speed, position, and flap-phase. A computer can calculate the constant adjustments needed, but this study experimentally proved that the ibises can keep up with those theoretical predictions.

The authors report, “This indicates remarkable awareness of, and ability to respond to, the wing-path—and thereby the spatial wake structure—of nearby flock-mates.”5 How the birds are able to sense the ever-changing sweet spot and to calculate the synchronizing body motion and flapping speed needed to remain in it remains a mystery. Be sure to watch video of these avian aeronautical accomplishments at “Come Fly With Me.”

How Do They Do That?

When asked to explain how the birds know how to fly with such precision, study leader James Underwood, the New York Times reports, said the birds may have evolved “rules of thumb”6 for flying or perhaps “they have good sensors”7 and adjust to what feels right. Future experiments will address such questions.

We marvel at the innate ability of these ibises to accomplish a feat that human pilots would find challenging. We also look forward to more information showing how birds manage to pull this off. Other areas to study may include an analysis of the actual energy savings accruing to each bird, an area not examined in this study. But these migratory marvels do not illustrate “evolving ‘rules of thumb.’” Birds in the study clearly were able to improve their performance with practice, but their ability to improve does not explain the origin of their excellent baseline aerodynamic instincts and remarkable sensory abilities.

Researchers may eventually discover what physically enables these birds to sense and respond to aerodynamic fluctuations with a precision that could instruct 21st century engineers. However, no amount of technology can look back through time to show how birds “evolved” their instinctive skills and sensory equipment. The abilities of these ibises do however showcase one of our Creator’s beautifully designed masterpieces.

The Bible tells us that God created all kinds of birds on the 5th day of Creation Week about 6,000 years ago. The more we learn about the ability of the birds and bees to navigate and negotiate their way through the world, the more we should marvel at our Designer’s hand in providing each kind of animal with the abilities it needs, no evolution required—nor even able to explain their origins.