Falcons are famous for their outstanding vision, able to detect their prey at a great distance. But God has given smaller birds a few amazing visual tricks, too, which help them spot their predators.

When you see a hawk soaring high overhead, have you wondered what the view looks like from up there? Well, the bird’s-eye view involves much more than the panoramic view we see from an airplane.

For starters, birds can see a wider range of colors than we humans can. Apparently, most birds can see all the colors we see, plus colors in the ultraviolet range that are invisible to us. This is possible because birds have four different types of color-sensitive cone cells in their retina, while humans have only three.

It’s difficult for us to appreciate what the bird’s expanded color vision would look like since we can’t even imagine colors we have never seen. But studies have shown that birds can see ultraviolet colors in the feathers of other birds, as well as in some flowers, fruits, and berries. This ability appears to play an important role in mate selection, as well as in foraging for food.

As a group, birds have the keenest eyes of all vertebrates. The bird’s eye is estimated to be up to three times sharper than our human eye. For example, flycatchers and hawks can see insects and other small moving prey at long distances. Even seedeaters can spot tiny morsels that would go unnoticed by humans.

One reason for the high visual acuity in birds is that they have very large eyes. Our human eyes make up no more than two percent of the weight of our head, while the eyes of birds can be up to 15 percent of their head weight. Another feature of the bird’s eye is that it has a relatively flat lens mounted at a greater distance from the retina, giving a long focal length that brings objects closer, like a telescope.

Two Eyes in One

Many birds have two spots in the back of their eyes, not one, to focus light from different angles. These spots, called foveas, are clusters of high-density cells that sharpen vision. Each eye can focus independently toward the side (monocular vision), or both eyes can focus forward (binocular vision). 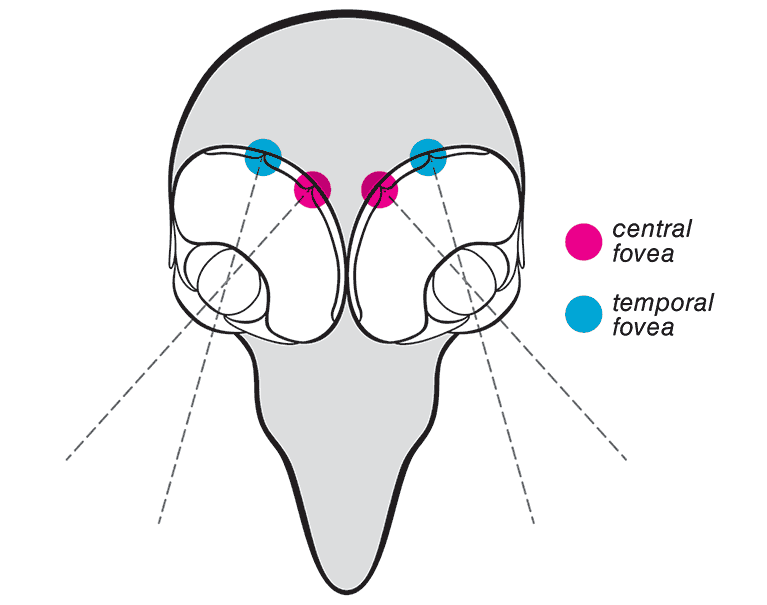 Birds that dive at high speed to catch their prey, or even those merely flying among the branches of trees, require good depth perception. Birds achieve this feat in one of two ways: either both eyes work together by creating overlapping images (binocular vision) or each individual eye estimates distances by comparing the apparent movement of close and distant objects.

Binocular vision is especially well-developed in owls and birds of prey, such as hawks, that have more forward-facing eyes. This permits both eyes to have partially overlapping vision fields that the brain uses to create stereovision. But most birds’ eyes are positioned along the sides of their head. This arrangement gives them broad peripheral vision, allowing small birds, for example, to keep an eye out for predators.

Since most birds can’t move their eyes, it might seem that birds with side-facing eyes would lack binocular vision. But more than half of all birds have side-facing eyes that give them both binocular and peripheral vision at the same time! This is accomplished by having two foveas in each eye, unlike human eyes, which have only one. The fovea is a small spot on the retina that has a high density of color-sensitive cone cells and produces the sharpest vision spot in the center of the vision field.

In humans and other mammals, the fovea is located in the center of the retina and is thus called the fovea centralis. Birds with dual foveas have one in the center of their retina that faces laterally, and one positioned near the rear edge of the retina that faces mostly forward (see figure). This is essentially like having two eyes in each eye, one to look forward with binocular vision and one to look laterally.

But God Gives Us Eyes That Truly See

While our human eyes may in some ways seem inferior to the eyes of birds, we may be sure that God has given us eyes perfectly suited to our own unique needs. But most important, the Lord has uniquely blessed Christians with eyes that can truly see His works and ears that can hear His Word (Matthew 13:16).

Dr. David Menton holds his PhD in cell biology from Brown University and is a well-respected author and teacher. He is professor emeritus at the Washington University School of Medicine in St. Louis. Dr. Menton has many published works and is one of the most popular speakers for Answers in Genesis–USA.
Previous Article Hiding Their True Colors Next Article Colugos—Soaring Above Expectations