God designed a unique mammal that can glide from tree to tree without ever touching the ground. In fact, colugos are the best gliders in the world.

You might think the colugo (ka-LOO-go) of Southeast Asia is a clumsy creature—well, maybe at first glance. On the ground, these odd, squirrel-like creatures seem to flop and jump along with the awkwardness of a baby bird. They also make climbing a tree look like a laborious process, which involves scraping at the bark with sharp claws and then hopping up quickly on their tiny paws. You get exhausted just watching them.

But once they’ve reached high into the canopy of the rainforest—the place where they belong—something amazing happens. These clumsy ground-walkers take to the air in an elegant display of aerodynamics. They glide like no other mammal on earth and prove, once again, that our ingenious Creator knows how to surprise us.

The “Flying Lemur” That Isn’t

With their huge eyes and small heads, colugos have also been called “flying lemurs.” But that name proves false on both accounts.

First, they’re not related to the furry lemurs found on the island of Madagascar. The two species of this tree-dwelling creature have little in common with lemurs or other primates. For example, they have claws instead of nails, no opposable thumb, and smaller brains compared to their body size.

Colugos are so distinct, in fact, that evolutionists have had difficulty deciding which animals they are related to. Some scientists used to believe they were related to (or even ancestors of) bats. Others have suggested primates. Now they belong to an order all by themselves, Dermoptera (“skin wings” in Greek). Based on their distinctiveness, creationists suspect they are a unique created “kind.”1

Second, “flying lemurs” don’t fly the way birds do. Instead of flapping their wings, they’re designed to get the most out of their spectacular gliding ability. Much like the flying squirrels of the Americas and Eurasia, colugos can spread their arms and legs and soar from tree to tree when they need to cross open spaces. But what sets colugos apart is just how far soaring can take them. Some have been observed gliding as far as 450 feet (137 m). That’s as long as one and a half football fields. What’s more, they lose only about three feet of height for every 40 feet (12 m) they travel (pretty nifty when predators lurk nearby).

How do colugos manage their aerial feat? It’s all in the flaps. Each of these tree-dwellers has a large membrane of skin that wraps almost completely around its body. This gliding membrane, or patagium (puh-TAY-gee-um), fills in just about every gap. It runs from the shoulder blades to the front paw, from the end-most finger on the front paw down to the toes, and from the back legs to the tail. With the patagium spread out, the colugo looks something like a brown, leathery kite, and it floats in the air just like a kite.

All the gliding in the world wouldn’t be worthwhile without a good landing, though, and colugos excel there, too. Right before impact, they sharply reduce their gliding speed by flaring out their flaps, and then they use their four paws and sharp claws to distribute the force of the landing.

What’s more, these acrobats of the rainforest don’t perform their daring deeds during the day. Instead, they keep safe from eagles and other hungry hunters by traveling and feeding at night. In fact, they’ve been found to cover two miles per night in their search for food. That’s pretty remarkable for something about the size of a large squirrel.

Like many other nocturnal animals, colugos have large eyes to see through the darkness. This gives them excellent stereoscopic (3D) vision, essential for making their long flights. When daylight comes, they do not venture to the ground where they are clumsy. Instead, they hunker down under leaves or in hollowed-out trees, or they even hang upside down from branches, ready to glide away at a moment’s notice.

Since colugos live their entire lives in the rainforest canopy, God pulled out all the stops in designing them for arboreal existence. As you might expect from their forest abode, colugos eat mostly leaves, though they’ve also been observed to gobble up flowers, fruit, buds, shoots, and perhaps even sap.

Their comb-like incisor teeth are very unusual, with up to 20 tines (like the points on a fork). They may help grab and tear leaves, but scientists aren’t completely sure of the purpose behind their unique design.

In other respects, however, their teeth look like those of many carnivores. This odd combination serves as a good reminder that sharp teeth don’t necessarily mean that something eats meat. Plenty of vegetarians have menacing mashers, and even the most fearsome meat-eaters ate only plants before the Fall, no matter the size of their canines (Genesis 1:30).

Colugos have a strong stomach and long intestine that are well suited for getting the most nutrients out of their leafy meals. As for water, they get enough moisture from their food and the rain without needing to venture to the unsafe ground in search of a stream.

These animals also bring new meaning to the old nursery rhyme about cradles rocking in the treetops. Rather than anything falling, however, colugo mothers are well equipped to protect their young. These mostly solitary creatures have only one baby at a time. After only 60 days of gestation, colugos are born completely defenseless and weigh a little over an ounce—similar in some ways to joey kangaroos. While this might seem like a problem for a tree-dwelling creature, colugo mothers have an ingenious system for keeping little ones safe and warm. They create a secure pouch out of their patagium by curling up their tails.

The young will stay in this pouch most of the time until they’re weaned (though scientists aren’t sure exactly how long this takes). When the mother glides from tree to tree in search of food, the babies use their sharp claws to hold on tight.

The nocturnal colugo has proven a challenge for scientists to study. Since they never need to come down from the trees, they’re difficult to track, and their incredible gliding ability makes them a challenge to capture. They also fare poorly in captivity, which means we aren’t even sure how long they live in the wild. So, much mystery remains.

But what we do know about these high-flying acrobats proves that our Creator designed life to thrive in even the most unlikely of environments. Rainforest canopies might seem like a challenge to us clumsy tree climbers, but for the colugo, life in the leafy world proves to be—well—smooth sailing.

You might be surprised at the variety of animals that God designed to glide. 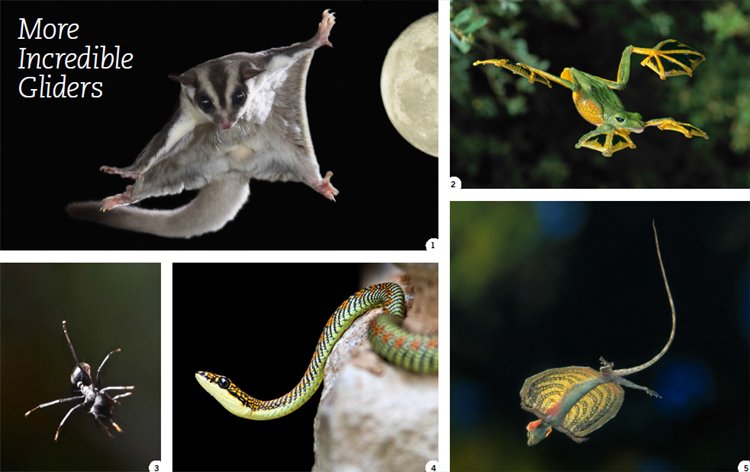