Image by Department of Environment and Science, via Wikimedia Commons (CC BY 4.0) 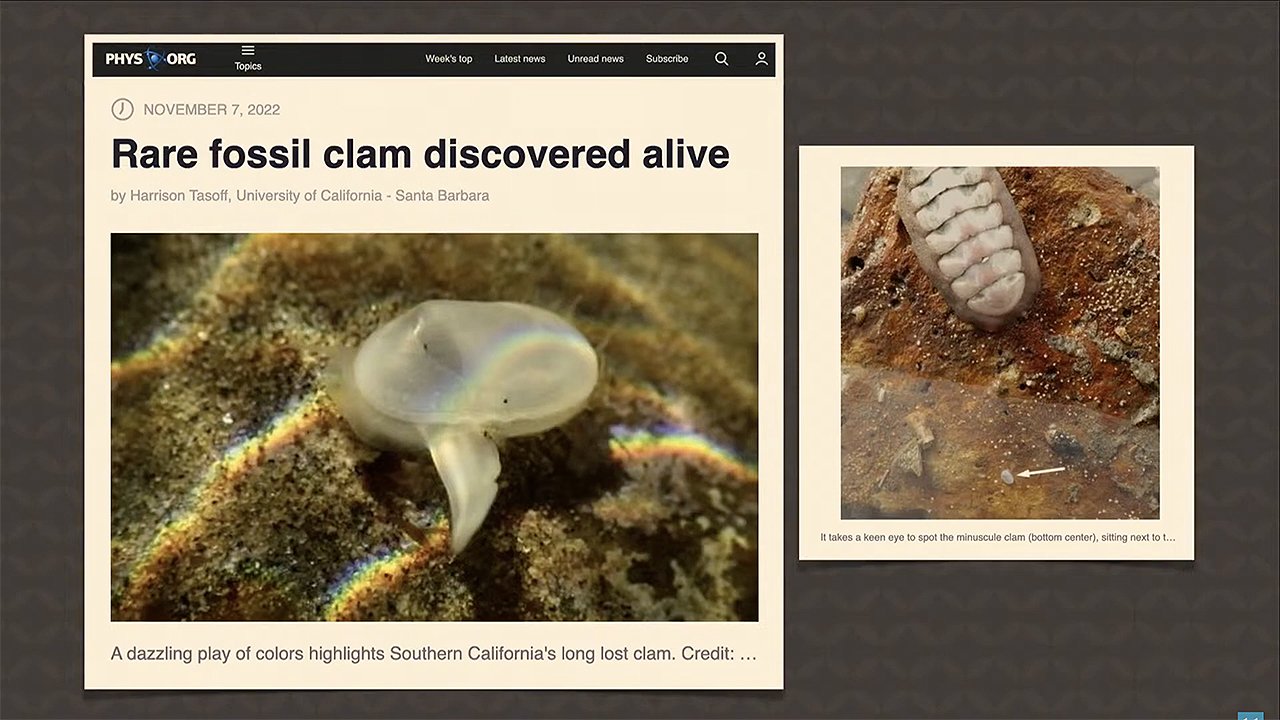 Imagine this: it’s November 2018, and a scientist is carefully turning over rocks in rocky tidal pools full of cold ocean water along the Southern California coast. He’s looking for nudibranchs. But, rather than a colorful sea slug, he spots something very small and translucent stuck to a rock—it’s a bivalve (clam) he’s never seen before. Fast forward four years and this scientist has a claim to fame as the discoverer of a new species. But it’s actually more interesting than that!

The species this researcher discovered wasn’t really a new species. It had been observed and documented before . . .  as a fossil. That’s right. A tiny clam, known only from the fossil record, turned up alive and well on a beach in Southern California!

The species this researcher discovered wasn’t really a new species. It had been observed and documented before . . .  as a fossil.

That makes this clam a “living fossil,” a living creature that is virtually identical to its fossilized counterpart (there are many examples of such living things). This is surprising in the evolutionary worldview that believes the fossil clams lived tens of thousands of years ago during the time of the La Brea Tar Pits, but it is not surprising in the biblical worldview.

You see, when we apply the true history of the world to fossils, we understand that most fossils were formed just a few thousand years ago, buried during the cataclysmic global flood. The land animal kinds survived on the Ark and sea creatures, like the kind this micro-mollusk belongs to, survived in the waters outside the ark. Since that was only about 4,350 years ago, it’s not surprising that this kind survived and looks so similar to its fossilized counterparts. No evolution has occurred because evolution has never occurred.

I discussed this item on Monday on Answers News with cohosts Dr. Georgia Purdom and Bodie Hodge. Answers News is our weekly news program filmed live before a studio audience here at the Creation Museum and broadcast on my Facebook page and the Answers in Genesis Facebook page. We also covered the following topics:

Watch the entire episode of Answers News for November 21, 2022.