Lily of the Sea

A Common Fossil Tells a Story of Noah’s Flood.

The beautifully preserved fossil is of a crinoid, or sea-lily.

Fossil crinoids are very widespread, and well known. Most living crinoids do not have a stem, and are known as the feather-stars. Those with a stem are known as sea-lilies. They are like a feathery starfish perched on top of a stem, which floats above a holdfast (or ‘root’) attached to, e.g., a rock surface.1

The stem (or stalk) of fossil crinoids consisted of a columnar stack of disks (or columnals). Such columnals, parts of a once-living crinoid, are extremely common fossils (see photo, right).

Compared to what we find in the fossil record, today’s crinoids are fewer in number, significance and variety. 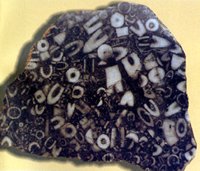 Crinoid fossils, though common, can result in attractive specimens like the one pictured here. They usually consist only of the leftover columnals (disks) from the stem of the sea-lily.

However, when we look at living crinoids, something interesting emerges. After death, the head of the creature almost immediately disintegrates. That is why crinoid fossils are mostly found as fragments. Where one finds a crinoid as beautifully preserved as the one shown, it indicates very rapid burial of the live creature. A crinoid which died and then lay on the ocean floor waiting to be slowly covered would not look like this.

In other places, such as the Redwall Limestone of the Grand Canyon, many crinoid heads are found ‘in a matrix of broken and sorted columnals. Rapid burial by an ocean current is indicated, because the same water that sorted the columnals also must have buried the crinoid heads before decomposition.’2 Such rock layers containing catastrophically deposited crinoids are often massive in extent.

In a complex worldwide watery cataclysm such as Noah’s Flood, a fundamental expectation (apart from billions of dead things buried in rock layers laid down by water all over the earth) is that most fossils would be of marine creatures. Only a very small proportion of land creatures would be covered by sediment to form fossils—the rest would rot and disintegrate. This superbly preserved fossil of a delicate sea-lily is just one of the many instances in which fossils give testimony to fast processes, not millions of years of slow burial.