What About Living Fossils?

When Charles Darwin published the first edition of the Origin of Species in 1859, he imagined a large evolutionary “tree” of organisms that were continuously connected by various transitional forms. Furthermore, he envisioned life constantly changing through time as various environmental and climatic conditions changed — with only the fittest and best adapted offspring surviving. At the time, paleontology was still a relatively young science and Darwin realized that the fossil record did not yet support his theory. Subsequently, he predicted that numerous fossil “intermediate links” would be found, gradually leading to the animals that we have today. Darwin did not predict that organisms at the lowest taxonomic levels would remain unchanged for long periods of time.1 He thought that their morphology (or body shape) would change (or evolve) over time.

What Are Living Fossils? 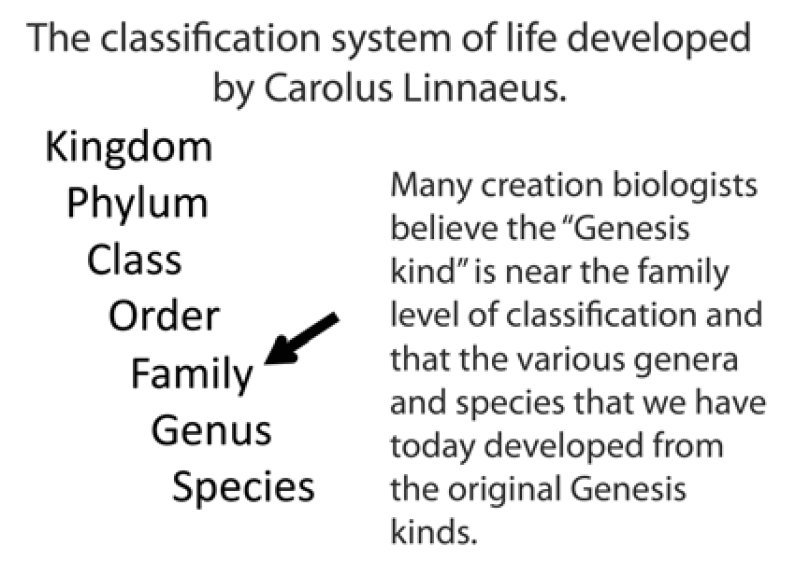 Initially, the term “living fossil” doesn’t make much sense. How could something be alive and a fossil at the same time? “Living fossils” are organisms that can be found both living in the world today and also found preserved in the rock record as fossils, with the living animals showing little if any difference from their fossil counterparts. Studying and comparing fossils to modern organisms is important because we can see how (or if) they have changed over time. The study of these organisms has implications for both evolutionary and biblical models of earth history. An organism is considered a “living fossil” if it has fossil representatives that are from the same taxonomic level — usually in the same genus or species group. Living fossils are impressive from an evolutionary perspective with some animal genera existing for nearly the entire range of the Phanerozoic2 record — that’s more than half of a billion years! From a biblical perspective, no fossils are much older than the time of the Flood, about 4,300 years ago, so a creationist might predict living fossils would be more common. Many famous examples of living fossils are found in the Cenozoic rocks, or ones that were made after the Flood was over.

What Are Some Examples of Living Fossils, and How Many Are There?

Notable examples of living fossil genera (plural for the classification level of a genus that can be further divided into distinct species), that have conserved the characteristics of their genus for millions of years (from an evolutionary perspective, these organisms appeared millions of years ago (MYA), include the ginkgo tree (Ginkgo, 252 MYA–present), the coast redwood (Sequoia, 151 MYA–present), horsetails (Equisetum, 361 MYA–present), a brachiopod (Lingula, 513 MYA–present), an annelid marine worm (Spirorbis, 488 MYA–present), the cockroach (Periplaneta, 49 MYA–present), the chambered nautilus (Nautilus, 340 MYA–present), and a sea mussel (Mytilus, 419 MYA–present).3 Some living genera have very close sister taxa in the fossil record (animals in related groups whose body shapes are very similar) including the coelacanth fish (Latimeria) with Coelacanthus (318–247 MYA), the horseshoe crab (Limulus) with Limuloides (419–416 MYA), and the Tuatara lizard (Sphenodon) with Cynosphenodon (190–183 MYA). There are many more examples of living fossils, many of which can be found published in various issues of creationist periodicals.

The standard geological time column is divided up into three main fossilbearing portions: the Paleozoic, the Mesozoic, and, the most recent period of time, the Cenozoic (which contains the Neogene and Quaternary Periods). Most creation geologists believe the Paleozoic and Mesozoic portions represent rocks that were formed during Noah’s Flood and that the Cenozoic represents post-Flood rocks. A recent query of the online Paleobiology Database (pbdb.org) was completed to find how many living fossils have been reported from each of these three periods of time. In this database, the genus is the lowest taxonomic group for which large amounts of data are available. From the Paleozoic, 99 living fossil genera were found; from the Mesozoic, 548 living fossil genera were found; and from the Cenozoic 2,594 living fossil genera were found. This is a total of 3,241 genera that can be found both living today and fossilized in the rock record!4 The database is updated daily by paleontologists as they find new fossils and catalog old ones, so this figure is surely an underestimate. The data were plotted using conventional 10-million-year (Ma) time bins (figure 1). The graph shows a “flat” distribution of living fossil genera during the Paleozoic and Mesozoic5 and then a “spike” in the number at the Mesozoic/Cenozoic6 boundary, a time during which most creation geologists think approximately marks the end of the Flood in the rock record.7 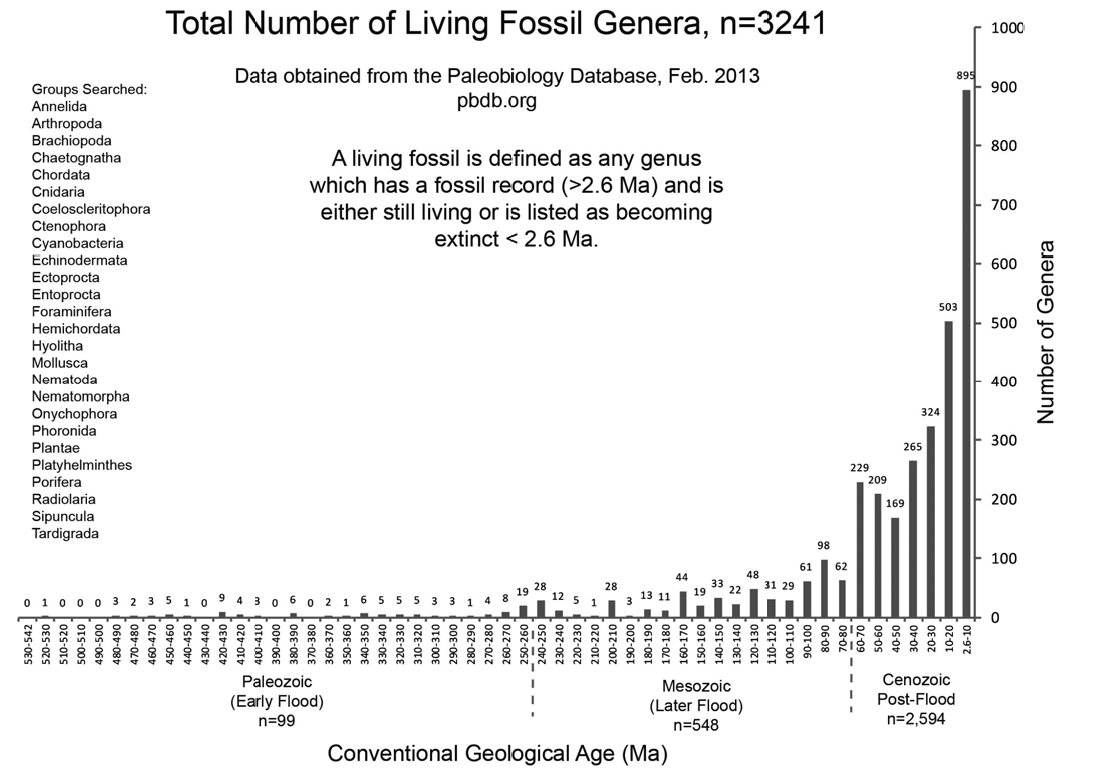 Do Living Fossils Support the Theory of Evolution?

As mentioned above, Darwin predicted that organisms would change over time. However, the number of living fossil genera (albeit small compared to the large number of extinct fossil genera) is troubling from a naturalistic perspective. Perhaps organisms could resist evolutionary change over long periods of time if their environment or climate did not change; however, this is very unrealistic. From an evolutionary perspective, continents have come together and broken apart several times. There have been several “ice ages,” multiple mass extinctions, and many changes in sea level during the time intervals examined. All of these factors have been claimed as impetuses for evolutionary change. In other words, these events have been cited as causes for extinction and evolutionary change every time they occur.8 Clearly, living fossils do not support the theory of gradual evolution (sometimes called “gradualism”) as proposed by Darwin.

To their credit, some paleontologists have recognized that gradualism is not the main pattern in the fossil record.9 “Stasis” is when organisms remain unchanged and have no recognizable evolutionary change for long periods of time. Gould argued10 that living fossils might be explained as organisms that have persisted through time and do not have very many different kinds of species within their respective genera and families. Since species diversity was low, the groups therefore lacked the genetic diversity to evolve, and the group remained pretty much unchanged through time. This hypothesis might be successful in explaining some small groups like the coelacanths and lungfishes that still look similar after more than 300 million years of geological time. However, there are two problems with this explanation: 1) smaller groups (like the coelacanths) should consistently be favored for extinction (since they have low diversity11), yet somehow they continue to persist for millions of years through many climate changes and extinction events, and 2) the explanation fails to explain why groups that are quite diverse, like the cockroaches (which number over 3,700 described species in multiple genera and families and whose group has been around for 300 million years12) fail to evolve. Cockroaches are a group with great genetic diversity; yet living fossils persist within it.

Do Living Fossils Support the Biblical Account of Biology and Geology?

If Paleozoic and Mesozoic fossils primarily represent organisms that were buried during the Flood and if the Cenozoic fossils primarily represent the post-Flood era, several hypotheses can be suggested to explain the patterns in the fossil record of these times. We might predict that rocks deposited during the Flood would lack clear sequences of transitional fossils because most fossils in those rocks would have been from organisms that were alive on the day the Flood began. This could explain the apparent phenomenon of “stasis” that is so common in the fossil record, especially in pre-Cenozoic rocks.13 We might expect a large number of pre-Flood taxa to become extinct, especially those that lived in marine environments (like trilobites or plesiosaurs) because they were not protected on the ark. Other organisms became extinct because they lived in ecosystems that were permanently destroyed during the Flood (like the floating forests proposed by Wise14). Living fossil taxa from the pre-Flood world would then be organisms that found comparable ecosystems in which to live after the Flood and had at least several representatives that survived the Flood. Apparently, not many genera were able to survive the Flood unchanged; there are only 647 Paleozoic and Mesozoic living fossil genera.

In the post-Flood times (the Cenozoic), four times the number of living fossils can be found compared to that of the pre-Cenozoic; and in the immediate post-Flood interval (60–70 MYA) there are more than twice the living fossils of any previous interval. In a Flood model, the Cenozoic would have been the longest period in earth history (lasting more than 4,300 years).15 The spike in the numbers of living fossils in the Cenozoic may be due to the rapid diversification of organisms immediately following the Flood16 and the ability of those organisms to establish themselves in the new niches they were filling. In other words, organisms changed quickly after the Flood (producing many new genera within Genesis kinds17), and once they became well-adapted to one of the many new niches after the Flood, change stopped. It is interesting that the graph shows a huge spike in the last interval of time, which may indicate additional diversification due to the climate changes that occurred at the beginning of the “Ice Age” or the Pleistocene Epoch.

From an old earth/evolutionary perspective, “living fossils” are an unexpected problem. Evolutionary change is predicted over time, but some genera remain unchanged for tens or hundreds of millions of years. Furthermore, why are the numbers of living fossil taxa fairly “flat” in the Paleozoic and Mesozoic times with a sudden spike during Cenozoic times? A creation-Flood model might answer this as rapid diversification of organisms following the Flood. Only a few select genera that were alive before the Flood were able to survive with their body shape unchanged. After the Flood, rapid diversification occurred probably because of climate changes and/or the opportunity for organisms to fill new niches. We think that all of these changes happened within the context of the “kinds” God created in Genesis 1. In other words, there was a lot of change, but within Genesis kinds.

Previous Chapter Ancient Man and Intelligence: Were People Originally Dumb Brutes or Brilliant? Next Chapter What Is the State of the Water Vapor Canopy Model?

Building on the previous New Answers Books, learn more about the Gospel and a young earth, death of plants and leaves, dragons, religious wars, cavemen, science, living fossils, and more.