Those familiar with the message of the Creation Museum know that it will feature a ‘walk through history’ based on the ‘7 C’s of History.’ Many, however, may not know just exactly what those 7 C’s entail. So, let us explain . . . 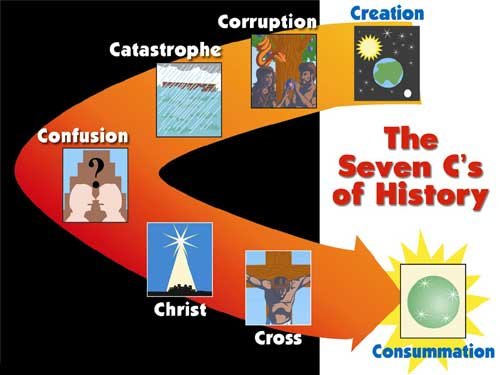 ‘The 7 C’s of History’ Click here for larger image.

‘The 7 C’s of History’ is a catchy phrase that helps people remember the big events that have affected (or will affect) the universe: Creation, Corruption, Catastrophe, Confusion, Christ, Cross, Consummation.

God created in six normal-length days around 6,000 years ago. His completed creation was ‘very good’ (Genesis 1:31), and all the original animals and the first two humans (Adam and Eve) ate only plants (Genesis 1:29–30). Life was perfect, and not yet affected by the Curse.

God told Adam that he could eat from any tree in the Garden of Eden (Genesis 2:8) except one—the Tree of the Knowledge of Good and Evil. He warned Adam that death would be the punishment for disobedience (Genesis 2:17). Instead of listening to the command of his Creator, Adam chose to rebel, eating the fruit from the tree (Genesis 3:6). Because our holy God must punish sin, He sacrificed animals to make coverings for Adam and Eve, and sent the first couple from the garden, mercifully denying them access to the Tree of Life, so that they would not live forever in their sinful state.

Adam’s sin ushered death, sickness and sorrow into the once-perfect creation (Romans 5:12). God also pronounced a curse on the world, changing it completely (Genesis 3, Romans 8:20–22). As a result, the world that we now live in is merely a decaying remnant—a corruption—of the beautiful, righteous world that Adam and Eve originally called home. The good news is that, rather than leave His precious handiwork without hope, God graciously promised to one day send a Redeemer who would buy back His people from the curse of sin (Genesis 3:15).

As the descendants of Adam and Eve married and filled the earth with offspring, their wickedness was great (Genesis 6:5). God judged their sin by sending a global Flood to destroy all men, animals, creatures that move along the ground, and the birds of the air (Genesis 6:7). Those God chose to enter the Ark—Noah and his family, and land-dwelling representatives of the animal kingdom—were saved from the watery catastrophe. This earth-covering event has left its mark even today. From the thousands of feet of sedimentary rock found around the world, to the ‘billions of dead things buried in rock layers’ (aka ‘fossils’), the Flood reminds us even today that our righteous God cannot—and will not—tolerate sin, while the Ark reminds us that He provides a way of salvation from sin’s punishment. The rainbows we experience remind us of God’s promise never again to destroy the earth with water.

After the Flood, God commanded Noah and his family—the only humans left in the world—and the animals to fill the earth (Genesis 8:17). However, the human race once again disobeyed God’s command and built a tall tower, which they hoped would keep them together (Genesis 11:3–4). So, around 100 years after the Flood waters retreated, God brought a confusion (a multiplicity) of languages in place of the common language the people shared, causing them to spread out over the earth. From these various groups are descended all the tribes and nations in the world today. Despite what you’ve been led to believe about our seeming superficial differences, we really are all ‘one blood’ (Acts 17:26)—descendants of Adam and Eve through Noah and his family—and all, therefore, in need of salvation from sin.

Our salvation comes through Christ, the Creator God who stepped into history to become a man.

Our salvation comes through Christ, the Creator God who stepped into history to become a man who would do what the first Adam did not do—live a perfect life in obedience to the Father (1 Corinthians 15:45–49). He was the Redeemer who had been promised 4,000 years earlier and who came to save the world from sin by dying on the Cross and rising three days later—paying the death penalty for those who receive His free gift of eternal life (Romans 6:23).

Those who have repented and placed their faith in the finished work of Christ look forward to the consummation of all things in the future, when the Curse will be removed and God will provide the new heavens and the new earth for His children. There will be no death or mourning or crying or pain (Revelation 21:4).

So, that’s a summary of the message our guests will experience as they make their way through the museum. We’ll also be providing details of how true science confirms that biblical account of history, and we’ll be answering the skeptical claims leveled at the Bible time and again. Our hope is that this museum will challenge non-Christians to receive Jesus Christ as Savior and Lord, equip Christians to better evangelize the lost, and exalt Jesus Christ as Creator, Redeemer and Sustainer.