Sights like a lunar eclipse are possible only because of our moon’s unique relationship to the earth.

Nearly every night a truly remarkable object greets us—the moon. It presents the same face, yet changes subtly on its monthly orbit around our planet. Because the moon’s journey is so regular and repetitious, we easily take it for granted. But it’s truly a wonder. The more we learn about other satellites, the more unique it appears to be.

We know from Scripture that God gave the moon a special place in his plan for the universe. He ordained the moon and other heavenly bodies to help us keep time (Genesis 1:14). Did you know that our monthly calendar, which we order our lives by, came from the moon’s orbit (not the sun’s)?

God also made the moon to provide light on the earth at night (Genesis 1:15, 17). Imagine the drabness of a moonless sky every night of the year! Despite the central place God gave the moon in his account of the universe’s origin, secular astronomers try to minimize its significance. If evolution is commonplace, then they believe nothing about the earth should be unique, including its satellite.

With ever-improving techniques to study our solar system and other stars, evolutionary astronomers are hoping to find earth-like planets and moon-like satellites all over the place. How’s their quest going? 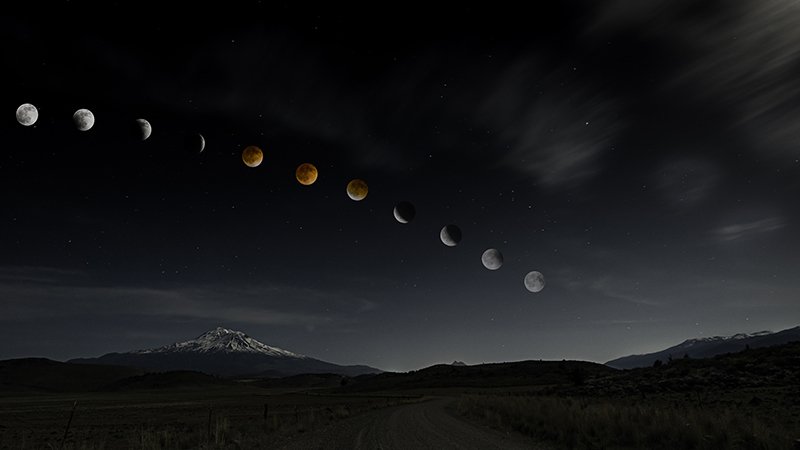 A composite photo of an eclipse on April 15, 2014, in California’s Shasta Valley, taken by Kai Cadarette.

Just Another Satellite in our Solar System?

With the invention of the telescope four centuries ago, the moon appeared to lose some of its luster. In 1610 Galileo discovered four satellites orbiting Jupiter, and we now know that two are much larger than our own. Saturn has an even larger satellite, Titan—the largest in the solar system, even bigger than Mercury. (Neptune’s Triton is also larger than the moon.)

So the moon isn’t the biggest satellite. Natural satellites aren’t even rare in the solar system. Currently the known number is 175 and growing. Is there any sense in which the moon is special?

Let’s look at some other stats. The massive outer planets have numerous satellites (not just one). What about the inner, terrestrial planets? Mars is orbited by two small satellites, but Mercury and Venus have none. So the earth is the only planet in the solar system with a single natural satellite. That’s unique.

What about size comparisons? The earth is the only terrestrial planet with a relatively large satellite. None of the outer planets have a satellite so close to its own size, either. While it’s true that the moon is smaller than the earth, the other planets’ satellites are many thousands of times smaller than their respective planets.

The moon has another unique feature that is often overlooked but just as important—its orbit around the sun. To appreciate its specialness requires some explanation.

Here’s what is interesting. Most major satellites orbit on a plane that matches the planet’s rotation along its equator. (Again, Triton is an exception.) Many minor satellites orbit this way too, though some have extreme elliptical orbits with odd paths around their planet—some like Triton even revolve backward with respect to their planet’s rotation. The moon doesn’t fit any of these categories.

However, the moon orbits on a plane that nearly matches the plane of the earth’s revolution around the sun (see illustration below). No other satellite orbits in the same plane that its planet revolves around the sun. Not one out of 175.

Most satellites in our solar system, such as Neptune’s Triton and Jupiter’s Ganymede, orbit on a plane that matches their planet’s rotation along its equator. The moon isn’t like this. It orbits in nearly the same plane that the earth revolves around the sun.

That’s very different from the earth’s rotation. This would be impossible if the moon evolved from the same spinning cloud as the earth. So secular astronomers assume an outside body struck the earth at a sharp angle, and the moon formed from the debris of this collision.

The Bible explains, in contrast, that the Creator placed the moon in this orbit for a special purpose. It serves a lifegiving role in maintaining the earth’s tilt, which provides seasons and keeps temperatures balanced. No other planet has a moon like this.

This fact has a profound effect on the earth, suggesting design. The earth needs to maintain its tilt in order to have the changing seasons and keep temperatures fairly balanced around the globe. But other bodies in the solar system exert a small gravitational pull that slowly tends to tweak the earth’s axial tilt. Left unchecked, the earth’s tilt would gradually change.

At one extreme, this change in the earth’s tilt would result in no seasons. On the other extreme, seasonal changes would be much more drastic than they are today, with much of the earth shifting from the boiling tropics in one season to the Antarctic’s frigid, sunless winters. Obviously, this would have disastrous consequences for living things.

But this does not happen because of the moon’s unique large size compared to earth and its unique orbit in the same plane that the earth orbits the sun. These two factors combine to allow the moon to stabilize the earth’s tilt to within two degrees. Both factors must be in play for this stabilizing force to work. This is the only planet where this is possible, and since life appears unique to earth, this is the only planet where it matters.

Which satellite is biggest when compared to its planet? Our moon! If you scale the other planets to the earth’s size, and scale their satellites similarly (see above chart), all other satellites are much smaller by comparison.

Our solar system has 175 known satellites. This chart shows the major ones with a radius above 250 miles (400 km). Five are larger than our moon, but the ratio of their sizes to their planets’ sizes is much smaller.

The difference in mass is even more significant. The moon is 1/80 the earth’s mass. But Ganymede, our solar system’s largest satellite (nearly twice the radius of our moon), is only 1/12,800 the mass of Jupiter!

Where Did the Moon Come From?

The moon’s unique orbit provides a clue that it has a unique origin. Secular scientists admit that it must have been formed in a unique way, unlike any other satellite in the solar system. But since they won’t credit the Bible’s answer, they’re desperately looking for an alternative explanation, no matter how bizarre.

Even before we sent men to the moon to collect samples, astronomers knew that the moon has an unusual composition, as well as an unusual orbit. By the 1960s, they had developed three theories for the moon’s origin. While the main incentive for the Apollo program was to win the space race, they had scientific objectives as well. One was to settle which theory of lunar origin was correct. The rock samples proved that none were true.

How did the moon get here, then?

After the Apollo program, NASA planned two Voyager probes to visit the outer planets and, along with other scientific goals, examine their satellites to help figure out where our moon came from. Despite everything they already knew about the moon’s uniqueness and the surprises of the Apollo mission, they still assumed that the moon must have an origin scenario similar to other satellites in the solar system. So, if scientists could figure out where the major satellites of other planets came from, they could discover the moon’s origin.

Behind these theories is the evolutionary assumption that the solar system formed 4.6 billion years ago when a cloud of gas and dust contracted under its own gravity. Most of the material supposedly fell to the center, eventually forming the sun. Meanwhile, the remaining material flattened into a disk, in which small particles began to come together. Over time, these little particles collected into larger and larger particles. Gravity attracted more particles until some grew large enough to become planets.

So where did the satellites come from? They propose two possibilities. Some particles that didn’t fall directly into the planets could have orbited the planets as they formed, eventually assembling themselves into planetary satellites. Other particles failed to become part of any planet. These leftover pieces presumably became asteroids and comets. Later (or so the theory goes), the planets captured some of these asteroids to become satellites, usually with very elliptical orbits.

As a result, theorists have attempted all sorts of special cases to explain this unique satellite. The conventional thinking for some time has been that another body about the size of Mars impacted the earth shortly after it formed. This glancing blow supposedly sprayed debris into orbit, from which the moon coalesced. But even this unlikely explanation failed to explain subtle differences in composition between the earth and moon. To solve this problem scientists recently suggested a series of large impacts from bodies with different material composition, instead of a single impact.

Ironically, these evolutionary theories require a series of exceptional events. Naturalistic astronomers assume nothing is unusual about the earth and yearn to prove that. Yet they can’t find a straightforward, simple theory for the origin of the earth and its satellite. So, to explain the moon’s unique orbit, they devise increasingly extraordinary explanations, which aren’t proven or supported by data from the rest of the solar system.

How many special circumstances is a theory allowed before it collapses? How many coincidences must be strung together before a reasonable scientist acknowledges that design is a better explanation than happenstance?

We know from Genesis that God gave the moon (“the lesser light”) unique functions from the very beginning of time. The moon, along with the sun (“the greater light”), has specific purposes to assist mankind in his role to honor and serve the Creator on earth. All the rest of the universe falls under “the stars also” phrase of Genesis 1:16, which relegates the other satellites to a secondary status (at least in this context).

This wording strongly implies that God made the moon with special purposes unique in creation. It is not surprising that He made the moon with so many special properties that scientists have come to appreciate, including the ones summarized in this article. The moon’s unique orbit surely is one of these attributes that testify to the moon’s special status, in a language which anyone can understand.

“The heavens declare the glory of God, and the sky above proclaims his handiwork. Day to day pours out speech, and night to night reveals knowledge. There is no speech, nor are there words, whose voice is not heard” (Psalm 19:1–3).

Dr. Danny Faulkner joined the staff of Answers in Genesis after more than 26 years as professor of physics and astronomy at the University of South Carolina Lancaster. He has written numerous articles in astronomical journals, and he is the author of Universe by Design.
Previous Article Time for a New Reformation Next Article Speak Up

The Creator equipped numerous animals with astonishing tools to find their way as they migrate around the world.