The Evidence of Things Not Seen

Black holes are real phenomena in our universe. These massive objects produce such a strong gravitational pull that not even light can escape.

Before Einstein, physicists thought of gravity as a force that pulled things through space. Einstein supposed that gravity is not a force at all, but rather a “bending” of space and time.

But what does it mean to “bend” space and time? In essence, this means that gravity imparts a sort of “velocity” to empty space, and matter just “goes along for the ride.”

We can illustrate this with an analogy: sailboats on a lake. The surface of the water represents “empty” space. The boats represent matter. The wind represents an external force on those boats, which drives them through the water. 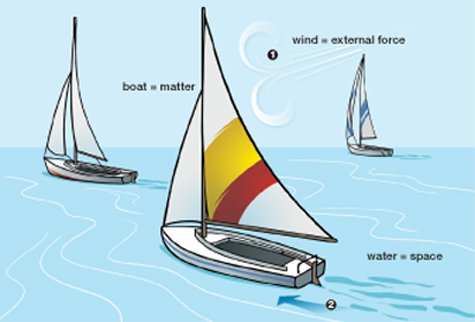 Before Einstein, gravity was thought to be like the wind—an external force acting on matter. But Einstein suggested that gravity is an effect, not on matter but on space itself. In our analogy, this means the water itself is flowing, as on a river, and the boats just “go along for the ride.”2 They would move even if there were no wind, because the water itself carries them along.

In our analogy, photons (particles of light) can be represented by fast motorboats that have their throttle stuck open at a certain speed (see illustration below). Like light in empty space, these motorboats always travel at the same speed. But the path of those motorboats is affected if the water is moving. Similarly, gravity bends the path of light because light travels through space, and space is “moved” by gravity. We don’t notice the effect of gravity bending light here on earth because earth’s gravity is very weak compared to the speed of light. But the bending of light by gravity has been detected in space.

How a Black Hole Works 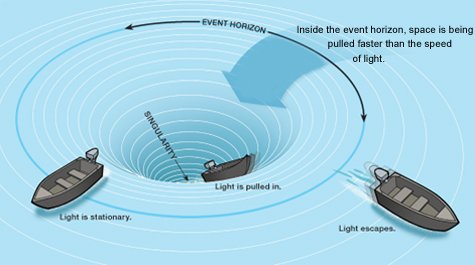 Gravity is so strong near a black hole that it pulls space inward faster than light can travel away. There is a point at which light “stops” because it is traveling outward at the same speed space is pulled inward (called the event horizon).

This effect is merely one of several verifications of Einstein’s physics; so we can have some confidence that gravity really does bend space and time as Einstein claimed. Since space itself is pulled by gravity, modern physics indicates that it is indeed possible to have a gravitational field so strong (and thus, space would be moving so fast) that light itself cannot escape. And since nothing can travel through space faster than light, nothing would be able to escape from such a powerful gravitational field. This is a “black hole”—a term coined by physicist John Wheeler in 1967.3 Although they may seem counterintuitive, black holes are a real phenomenon.

Since space itself is pulled by gravity, modern physics indicates that it is indeed possible to have a gravitational field so strong that light cannot escape. This is a black hole.

Black holes are similar in many respects to the “dark stars” predicted by Michell, but there are some differences because our understanding of physics has improved since Michell’s time. As one example, unlike Michell’s conception, the actual mass of a black hole has essentially no size at all. This is because the gravity is so strong that all the mass of the “star” becomes crushed into a point called a singularity. So all the “substance” of a black hole is in the singularity.

To illustrate the physics of a black hole, let’s return to our lake analogy. Imagine we pull out a giant cork in the middle of the lake and the water begins to drain. Water near the edge of the lake would be essentially unaffected. But water near the center would rapidly move toward the drain. The drain represents a massive object—the singularity.

At some small distance away from the drain, the water would be moving at the same speed as the motorboats (which represent particles of light). In other words, at this radius the water (symbolizing “space”) is moving at the speed of light, which we denote by the symbol c. In a black hole, this distance is called the “Schwarzschild radius”—it’s the place where space is falling into the black hole at the speed of light (c). Imagine a motorboat trying to escape by aiming away from the drain. It would be stationary because it moves at the same speed away from the water that the water is flowing toward the drain. Likewise, light that is aimed away from a black hole would be stationary at the Schwarzschild radius. It would be like salmon trying to swim upstream, but not making any headway. Objects much farther away than the Schwarzschild radius do not get pulled in; they could orbit the black hole just as planets orbit the sun. The effects of gravity pulling on space diminish with distance from the singularity just as water being pulled toward the drain is minimal far from the drain.4

The region of space corresponding to the Schwarzschild radius is called the “event horizon.” It’s a horizon because you can’t see past it. You would never see any events that happen inside of it, since their light would never reach you.

The event horizon is the “point of no return” for a black hole. Inside the event horizon, space is being pulled toward the singularity faster than the speed of light.

(Yes, physics allows this. Although neither matter nor energy can move through space faster than light, there is no known restriction on how fast space itself can move.) Since nothing can move through space faster than light, anything inside the event horizon will be pulled toward the singularity and crushed into it—there is no escape! Even light will be pulled backwards into the singularity.

Another strange consequence of being in such a strong gravitational field is that light can actually orbit a black hole at a distance of 1.5 times the Schwarzschild radius. At this distance, light (if aimed in just the right direction) will be influenced so strongly by the black hole’s gravity that it will circle around the black hole indefinitely. 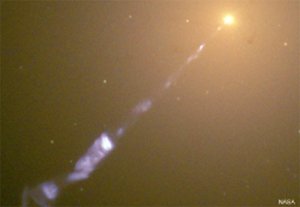 The giant elliptical galaxy M87 is located 50 million light-years away in the constellation Virgo. The object at the center of M87 fits the description of a black hole. A black hole is believed to be the “engine” that emits a brilliant jet of high-speed electrons (diagonal line across image). Photo courtesy of NASA.

Therefore, we should expect to see some visible stars orbiting around an invisible companion. And we do! One example is Cygnus X-1; here a blue supergiant star orbits around an unseen companion. The estimated mass of the invisible object indicates that it is indeed a black hole.

Many similar cases have been found. But there are other ways to detect black holes as well. For instance, material falling into the black hole can heat up and give off X-rays and other forms of radiation before it reaches the event horizon.

Some black holes have a mass comparable to a star. These stellar mass black holes may be the crushed cores of exploded stars. Other black holes are much more massive. These are commonly found in the center of galaxies. Even our own galaxy is suspected to have a super-massive black hole at its center. These galactic black holes may act as gravitational anchors for some stars in the galactic bulge.

Black holes provide an observable confirmation of Einstein’s theory of general relativity. Such physics is the basis for several young-universe cosmologies, which allow light from the most distant galaxies to reach earth in thousands of years or less. Scientific discoveries, such as black holes, are not only interesting, but they give us a small glimpse into the thoughts of an infinite God (Psalm 19:1).

What Is Dark Matter?

Astronomers have discovered that galaxies rotate faster than they would if they were comprised of only observable objects, such as stars, gas, and dust. In other words, the visible mass in most galaxies does not provide enough gravitational attraction to account for the motions we observe. This suggests that galaxies contain an invisible source of mass, called dark matter. Dark matter is any nonvisible substance that is detected only by its gravitational influence on other (visible) objects. Most astrophysicists currently believe that there is much more dark matter in the universe than visible matter.

Some physicists believe that dark matter is composed of ordinary matter, but that such matter is so cold that it does not emit enough radiation for us to detect. For example, planets or other large objects that do not radiate energy or reflect light from nearby stars would be classified as dark matter. Black holes are one example in this category. However, it is more commonly believed that most dark matter is composed of exotic, as-yet-undiscovered particles that permeate the universe. This is called nonbaryonic dark matter because, unlike ordinary atoms, it would not be made of protons and neutrons (which are baryons).

Some scientists have suggested alternatives to dark matter. For example, it may be that the laws of physics are slightly different than currently understood, as suggested by the MOND1 and Carmelian2 models. If either of these models is correct, then there may be very little dark matter in the universe. Such a result would be devastating to big bang models since these require copious quantities of dark matter. However, most creation models of cosmology would work either way.