Physics is a relatively “clean” science because it deals mostly with the world as it exists. Yet it has struggled to explain some weird experimental results.

Physics has a reputation as the most quantitative and precise of the sciences. Furthermore, it is very “clean” in the sense that it deals mostly with the world as it exists rather than questions of origin, so it is relatively free of evolutionary ideas.

For two centuries after Sir Isaac Newton (1643–1727) developed what we call “Newtonian” or “classical” physics, physics produced breathtaking results in every area in which it was applied. Then, as the nineteenth century closed, a number of experiments produced weird results that were difficult, if not impossible, to explain with classical physics.

Quantum mechanics has been used to successfully predict the behavior and characteristics of molecules, atoms, nuclei of atoms, and elementary particles

Quantum mechanics is a very successful theory. Physicists have used it to correctly predict the behavior and characteristics of molecules, atoms, nuclei of atoms, and elementary particles.

Despite its success, some people are reluctant to accept the science of quantum mechanics. Why?

Another “problem” that some people have with quantum mechanics is that this theory suggests a fundamental uncertainty in nature. In classical physics, if we know where particles are and how they are moving at any given time, we can (in principle) calculate where they will be and how they will move at any other time.

In quantum mechanics, however, even if we had complete knowledge of particles’ positions and velocities, we could not definitely predict their future positions and velocities. This uncertainty is not merely the result of ignorance of vital information but is a fundamental uncertainty so that future outcomes could not be computed (with certainty) even if we knew everything about the present. This suggests to some people that even God Himself could not know future outcomes, which would violate God’s omniscience. However, such a notion presupposes that God predicts the future only by computing it based on the present, rather than God knowing the future because He is beyond time.

Quantum mechanics helps make some of our modern technology possible. A few examples include the laser (above), the electron microscope, and magnetic resonance imaging (MRI).

In any case, classical mechanics had created its own challenges to God’s role in the universe. In classical physics, all outcomes were predetermined by earlier conditions. That is, if we knew the positions and velocities of particles in the past, then using the laws of physics, we can predict with infinite precision where all particles will be in the future. This led to determinism, the belief that God does not interfere with the world to change these outcomes. Of course, most Christians readily saw the folly of determinism—God can intervene anyway He pleases because He is God.

In 1919 a total eclipse of the sun allowed scientists to confirm Einstein’s general theory of relativity. As a result of the sun’s gravitation, stars appeared to be displaced from their true positions, just as Einstein’s theory predicted.

Two theories of relativity are used in different cases, the special and general theories. Albert Einstein published his special theory of relativity in 1905. To explain some peculiar experimental results, Einstein assumed that the speed of light is a constant regardless of our motion through space. His theory made predictions concerning objects that move near the speed of light. He predicted that time would slow down and that mass would increase for a fast-moving object. This behavior seems strange and does not conform to what we might expect from everyday experience, but keep in mind that in everyday experience we do not encounter objects moving close to the speed of light. Eventually, these predictions were confirmed by experiments.

In 1916, Einstein published his general theory of relativity, which applies to particles as they accelerate, particularly because of gravitation. In general relativity, space and time are “physical” things that have a structure in some ways similar to a fabric. Though it sounds weird, the presence of a large amount of matter or energy alters space. Mathematically, this alteration of space looks like a curvature, so we say that matter or energy “bends” space.

The curvature of space helps to explain a problem that Newton could not answer about gravity. The presence of matter and energy is communicated to other matter and energy through this curvature. Newton had hypothesized that gravity operated through empty space, but his theory could not explain how the information about an object’s mass and distance was transmitted through space. In general relativity, objects still move through a straight line in spacetime, but we see the motion as acceleration because of the curvature of spacetime.

Relativity seeks to understand the relationship between time, space, and matter. Einstein’s theories of special relativity and general relativity have both been confirmed to be accurate.

Einstein’s new theory made several predictions. The most famous was his prediction that the sun would deflect the light of stars as the light passed near the sun on its way to earth. The total solar eclipse in 1919 provided the first test, allowing astronomers to observe starlight at the edge of the sun, which is normally invisible to us because of the brightness of the sun. The data supported Einstein’s theory. Over the years, this experiment has been repeated with far increased accuracy, and many other tests have shown Einstein’s theory to be true.

We can apply general relativity to the universe as a whole. Indeed, when we do this, we discover that the universe is changing in size. In 1928 Edwin Hubble (1889–1953) showed that it is expanding. Most people today think that the expansion began with the big bang, the supposed sudden appearance of the universe 13.7 billion years ago.

However, many other possibilities exist. For instance, the creation physicist Russell Humphreys proposed his white hole cosmology assuming that general relativity is the correct theory of gravity. It is interesting to note that universal expansion is consistent with certain Old Testament passages, such as Psalm 104:2, that mention the stretching of the heavens.

With the establishment of quantum mechanics in the 1920s, the development of the science of particle physics soon followed. At first, only a few particles were known, the electron, proton, and neutron. Physicists eventually realized that many other particles must also exist, and experimental evidence for these odd particles soon followed.

The Size of Strings 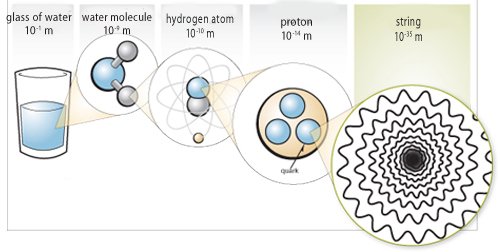 STRINGS—THE SMALLEST OBJECTS KNOWN TO PHYSICS
Looking at progressively smaller parts of a water molecule, we can glimpse the complexity God designed in all things. We realize the hydrogen atom pictured here is deuterium, a rare isotope of hydrogen.

In recent years, physicists noticed that they could easily explain certain patterns among elementary particles if particles behave as tiny vibrating strings. To work, however, these “strings” would require at least six additional dimensions of space. We already know that the universe has three normal spatial dimensions, as well as the dimension of time. So these six extra dimensions would bring the total number of dimensions to ten.

Supporters of string theory suggest that the reason we do not normally see the other six dimensions is that they are tightly curled up and hidden within the tiny particles themselves. At extremely high energies, however, the extra dimensions could manifest themselves. Therefore, particle physicists can predict what kind of behavior strings exhibit when they accelerate particles to extremely high energies. The problem is that current particle accelerators are not nearly powerful enough to produce these effects. As theoretical physicists refine their theories and we build new, more powerful particle accelerators, physicists expect that one day we can test whether string theory is true. But for now, there is no experimental evidence for string theory.

The Future of Physics

String theory has emerged in the twenty-first century as the next great potential idea in physics.

Modern physics is a product of the twentieth century and relies upon twin pillars: quantum mechanics and general relativity. Both theories have tremendous experimental support. Physicists are certain that both quantum mechanics and general relativity are incomplete, however. They still fail to explain certain aspects of the physical world, and some new theory will eventually supersede them. String theory has emerged in the twenty-first century as the next great potential idea in physics. Time will tell if string theory will live up to our expectations.

What should be the reaction of Christians to such “weird physics”? We must be vigilant to avoid the nonbiblical influences on modern thinking. However, if a scientific model does not contradict the Bible, then we should be excited to see what new insights we can gain about the Creator and His workings. As with the question of origins, we must interpret the data through the lens of biblical revelation.

Do the new theories adequately describe the world? Can we see the hand of the Creator in our new physics? Can we find meaning in our studies that bring glory to God? If we can answer “yes” to each of these questions, then these new theories should excite the interest of the Christian.