God created the universe mature. Instead of giving just an appearance of age, God created it fully functional, according to the Bible.

When God finished creating the heavens and earth, everything was fully formed. The stars burned brightly, the trees were laden with fruit, and animals were ready to bear young. The earth and its inhabitants were designed to last forever, without aging or dying. The first animals and humans were ageless—you couldn’t even tell whether they were alive only one day or alive for one thousand years. In short, God created a mature universe.

As I have spoken at conferences over the years, people have often come up to me and said:

When I am talking to someone who believes in an old earth, one of the things I say to them, as a young-earth creationist, is that God didn’t make Adam a baby—He made him an adult. And when He created the universe, He created it fully functional, with the appearance of age—even though it wasn’t old.

Does the Creation Look Old?

My response often shocks these speakers: “By saying the universe looks old, you are trusting that dating methods can give us an apparent old age for the universe—but they can’t.”

Let me explain. When people say the universe has “apparent age,” usually they are assuming, for whatever reason, that the universe “looks old.” I have often found that, unconsciously, such people have already accepted that the fallible dating methods of scientists can give great ages for the earth. So if they believe what the Scripture says about a young universe, they have to explain away this apparent great age.

Does the universe really look old, or have we simply been indoctrinated to believe it looks old? Would the Creator God of the Bible, who does not lie, really deceive us into thinking that the universe looks old—when according to the Bible’s account of history, He created it only about 6,000 years ago? What would a “young universe” look like, anyway?

Creation scientists have written many articles to clearly show that all dating methods (other than the record of history given in the Bible) are based on fallible assumptions and can’t be trusted to give absolute dates about the past.1 Also, dozens and dozens of dating methods contradict an old universe and actually support a young age.2 (For example, the oceans would be much saltier if salts had been accumulating in them for hundreds of millions of years, and many short-lived comets circling the sun should have broken up if they were more than a few thousand years old.) 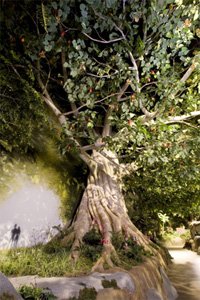 Some people conclude that God would have created them with the appearance of age, say 20 or 30 years old. But would “age” have any effect on Adam’s body before he sinned? If the first people—and the universe—were originally designed to last forever, would you expect to see any difference between a man at age 30 or at age 3,000?

When doctors look at the human body today, they can estimate age from various evidences in the body. But before sin, nothing aged—everything was created “very good.” The human body did not experience the effects of sin or aging.

What would a doctor from today’s fallen world say if he looked at Adam and Eve’s bodies just after they were created? This doctor would be very confused. Such perfect bodies would show no degenerative aging, and he would be shocked to learn that these adults were less than a day old.

Now it is true that when God created the earth the first day of Creation Week, it wasn’t fully functional. God deliberately prepared the earth and created the various kinds of living things over six days. However, at every stage of creation, everything God did was “good,” and all was functional for His created purposes. The creation was then finished—mature, but not with so-called “apparent age.” When Adam and his first descendants looked at the earth, they did not assume apparent age because they knew, based on God’s word, that creation had taken place recently.

The sun, moon, and stars would be in place fully formed and functioning perfectly.

The dry land would have soil ready for plants. The various original plants, including trees, would have mature fruit to nourish Adam and Eve and the animals. Perhaps trees even had tree rings, as a regular part of the tree’s structure. Adam and Eve and the animals were created mature and fully functional so they could reproduce. But none of these things were “old” or “looked old.”

God Does Not Deceive

“God is not a man that He should lie” (Numbers 23:19). God did not deceive us by making a universe that looks old. No, He gave mankind the truth about creation. Only later did the devil deceive Eve about the accuracy of God’s word. Her husband, Adam, then rebelled against God, bringing a curse upon the whole universe. This curse radically changed the appearance and function of the universe. “The whole creation groans and labors with birth pangs together until now” (Romans 8:22).

The world is now an aging, fallen creation—not a creation with great age.

Previous Article Thirty Miles of Dirt in a Day Next Article Bara-What?