Ur Connects Babel to Today

Today tourists tramp through towering pyramids and ziggurats left by great civilizations, admiring their artwork and architecture. But what do these dusty remains tell us about the families who left Babel?

Several ancient cities sprang up in the region around Babel. The kings of these cities were supposedly divine, calling themselves “the sons of god” (sons of the patron god of each city). It appears that the rebels at Babel never lost their desire to “make a name for themselves,” creating elaborate mythologies and putting themselves at the top of the heap. The more we learn about these cities, the more we are struck by the pride of most Babel descendants, in contrast to the few faithful followers of God.

Ur, for example, had adopted Inanna, a moon goddess, as its patron. Religious leaders and rulers used this false religion to control the populace. (It appears that Jericho also adopted the moon goddess, who was embarrassingly defeated when Jericho fell.)

Ur is of particular interest to us because Abraham was born in this city a few generations after Babel. The most likely site of Ur is Tel Muqayyar in southern Mesopotamia, about 140 miles (225 km) south of ancient Babylon. Between 1922 and 1934 it was excavated by the British Museum and the University of Pennsylvania. Both have excellent museum displays of their finds at Ur. 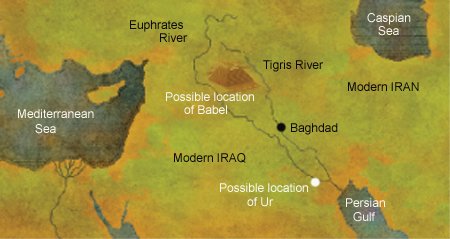 The Bible tells us that God called Abraham out of the city of Ur. Life in this early city may give us clues about life at the Tower of Babel.

The streets of Ur were unpaved, undrained, and narrow. (Abraham did well to take his family into the fresh air of the countryside.) The houses, usually two stories, were made of fired bricks laid around the bottom and partway up the walls. The rest of the walls were simply mud, with an outside coating of plaster. A single door led into a courtyard. One can imagine what they did with the sewage.

Family members of common folks were buried under the floor. Not so with the elite. Large quantities of precious metals made into jewelry adorned the bodies of the wealthy. Servants, sometimes in considerable numbers, joined their masters in death. In one case, as many as 68 gave up their lives and were buried with their master.

Details about Ur add sparkle to the message of God’s Word. The very fact that we find many remnants of pagan cultures but no physical evidence of Abraham reminds us that God’s people are not earth-focused. They walk by faith and not by sight.

Abraham chose to live in tents, not in grand cities. Almost all Middle Eastern archaeological remains are found in these cities, so we would not expect to find any of Abraham’s “leftovers” in archaeological excavations.

Abraham left Ur at the height of its splendor and power. Instead of seeking wealth and fame on earth, he looked for a greater city “whose builder and maker is God” (Hebrews 11:10). That city can be seen only with the eyes of faith.

To learn more about Abraham of Ur, we must examine the evidence he would have left behind. His legacy is not found in bones, brick, and stone, but in the people who descended from him and in the written record they left. In God’s eyes, his legacy is of infinitely greater value and longevity than cities or monuments erected by the great nations that arose after Babel.

In God’s eyes, his legacy is of infinitely greater value and longevity than cities or monuments.

Abraham was originally named Abram, which means in Hebrew “exalted father.” The Bible tells us that God changed his name to Abraham, meaning “father of a multitude [of nations]” because it was in God’s eternal plan, after Babel, to raise up a chosen people for Himself through Abraham (Genesis 18:18–19).

His wife’s name was originally Sarai, but God gave her the new name Sarah, meaning “female ruler or queen,” for she would become the mother of a great people. Through this humble family, God planned to bless the nations that He had judged at Babel.

Genesis gives a careful genealogy of Abraham’s family, all the way back to Adam. Genealogies are God’s way of reminding us that “family” is foundational to His plan for mankind. God created the first man and woman—Adam and Eve—and told them to have children, thus making more families (Genesis 2:23–24). Abraham was in the chosen family who would bear the “seed” of Eve (Genesis 3:15) that would bless the nations God scattered from Babel.

There is much yet to be learned from archaeological finds. Only a small number of hundreds of thousands of clay tablets have been deciphered (130,000 in the British Museum alone). They have treasures of knowledge yet to be discovered that are sure to explain more about the peoples and places of the Bible. Scholars are needed who will learn ancient languages and open the door for others to understand these texts.

Yet we can be sure that we have in our hands all the history we need for salvation (2 Timothy 3:15–17). Any details that we unearth will merely enrich the clear message already preserved for us in God’s Word.