Civilizations of antiquity did not slowly evolve or trickle into history over tens of thousands of years.

Their quick appearance in a relatively short amount of time confounds archaeologists and anthropologists, even as they continue to discover amazing evidences for these highly complex early civilizations.

These ancient people had extraordinary technology to build architectural structures like pyramids and ziggurats. Recently discovered artifacts show that they also had sophisticated manufacturing and trade networks, from Mesopotamia to the Indus Valley. 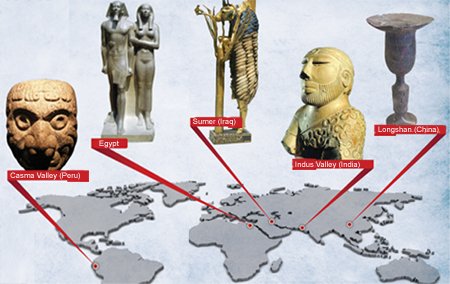 These are the locations of several civilizations of antiquity. Click on picture to view larger image.

The sudden emergence of civilizations was not limited to the Middle East. A complex civilization has been discovered in the Casma Valley of Peru. According to a report in Scientific American (“Early Andean Cities,” June 1994), archaeologists found temple-topped mounds nearly 100 feet (30 m) tall built only a few hundred years after the Great Pyramid of Egypt.

In China, archaeologists have discovered complex walled cities, with large structures for religious ceremonies. These cities are from the Longshan era, which predates the earliest Chinese dynasties (Asian Perspectives: The Journal of Archaeology for Asia and the Pacific, Fall 1999). Again, there is evidence of manufacturing and trade.

The picture emerging from the archaeological record is startling. Culture and technology developed quickly, from simple villages to complex cities that “pop” onto the stage of history. Civilizations rise and fall with amazing speed. It seems that sophisticated cultures can develop much more quickly than historians had once thought. Yet none of these advanced cultures predate Babel.

Diana Waring, author of Answers in Genesis’s new history curriculum Ancient Civilizations, is a popular speaker who has written a number of books and produced numerous history-based audio products. Diana’s intense interest in history, which developed when she was young, has grown into a consuming passion to link biblical history to secular history.
Previous Article Dating the Pyramids Next Article Ur Connects Babel to Today