Getting Archaeology Right at Ai

For decades secular archaeologists have dismissed the Bible’s account of Joshua’s battle at Ai. It bears little resemblance to the terrain at et-Tell. But what if they’re looking in the wrong place? 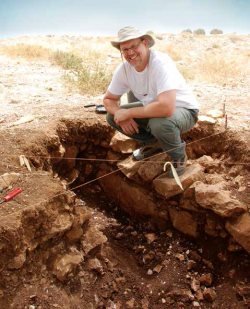 Joshua’s conquest of Jericho is one of the most exciting and popular accounts in all the Old Testament (Joshua 6). The events over the next few weeks, however, are less well-known and often overlooked. But the conquest of the Canaanite fortress (or city) of Ai, recounted in Joshua 7–8, remains of great importance in the history of God’s dealing with His people.1

Like so many other amazing events described in Scripture, the historical accuracy of this one is also under attack. Fortunately, God’s Word gives us light to reevaluate the archaeological evidence.

Sin in the Camp

After Israel’s victory at Jericho, Achan secretly took some of the “devoted things” (Joshua 7:1, NIV). His foolish sin against God’s direct command brought divine judgment on Israel, which suffered a major defeat at the hands of Ai’s king (Joshua 7:2–5). After Achan’s sin was discovered and punished, the Lord sent the Israelites out to battle once again. This time, they won a great victory.

The Bible gives some fascinating details about the countryside and the strategy Joshua used. But since most modern biblical scholars and archaeologists refuse to accept God’s infallible Word as their starting point for interpreting the evidence, they reject the historicity of these events.

For many years, archaeologists excavated a site called “et-Tell,” which they claimed was the Ai of Joshua. The evidence from the site does not line up well with the Bible, so they concluded the biblical account was in error.2 The following assertion is fairly typical: “Archaeology has wiped out the historical credibility of the conquest of Ai as reported in Joshua 7–8.”3

Archeaological site Maqatir, now thought to be the ancient city of Ai from Joshua 7–8 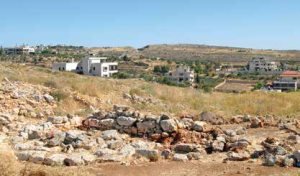 The hill to the north of Ai where Joshua’s army encamped is now called Jebel Abu Ammar. Ai’s city gate is in the foreground. 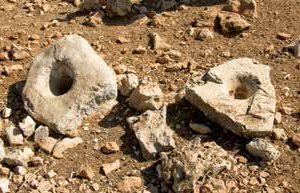 socket stones used for the gate 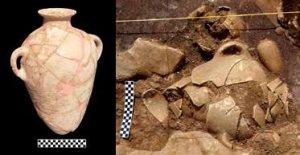 Any time scholars point to evidence that they claim contradicts Scripture, you can bank on one thing: the Bible is not in error. The problem has to lie elsewhere. There are always alternative interpretations. In this case, was it possible that they were just digging in the wrong place?

Over many years of careful archaeological, biblical, and historical investigation, the Associates for Biblical Research (ABR) discovered that these scholars had, indeed, made this colossal blunder!

The narrative of Joshua 7–8 provides us with numerous details, many of which ABR has been able to verify.5 After excavating for over ten seasons,6 they have revealed persuasive reasons to believe they have uncovered the lost city of Ai. And they believe the discovered evidence confirms the biblical account! Khirbet el-Maqatir fits every single requirement demanded by the biblical text. What follows here are a number of compelling reasons:

Joshua’s army “encamped on the north side of Ai, with a valley between them and Ai. . . . So they stationed the forces, the main encampment that was north of the city and its rear guard west of the city” (Joshua 8:11, 13). Due north of our site is a hill called Jebel Abu Ammar. It is the highest hill in the region and provides an excellent tactical position for military operations to be carried out.

When Joshua arrived at Ai with his army, he stood “in front of” Ai on its north side (Joshua 8:11). The “front” of the city would be the wall with a gate. In 1995, ABR discovered remains of the gate on the north side of the city wall, fulfilling a very precise requirement for Ai. The ABR team also discovered socket stones, which held the doorposts of the gate in place.

3. A spot for the ambush forces to hide

Reading through the narrative of Joshua 7–8 carefully, we see that the Lord told Joshua to split up his army (Joshua 8:2). Joshua obeyed and set up an ambush force to the west (Joshua 8:9, 8:12). A candidate for Ai must have a viable location to prepare for attack but remain unseen. Due west of Maqatir is a very steep valley called the “Wadi Sheban.”7 This valley is close to Ai and steep enough to easily hide Joshua’s ambush force.

Ai had to be occupied at the time of the Israelite entry into Canaan, in the late fifteenth century BC. The best way to verify such an occupation is to find pottery that can be dated to that same time period. ABR has discovered storage jars, jar rims, sling stones, and other artifacts similar to those from Joshua’s time.8 The west wall of the city has been uncovered and measures up to 12 feet (4 m) thick. Both the pottery near the wall and the size and style of the wall match the time period of Joshua well.

Joshua 8:25 indicates that women lived in the area, despite the fact that women did not normally live at a military fortress. In 2009, our team discovered an infant burial near the gate. The child apparently died in childbirth or soon thereafter. He or she was placed in a pottery jar in what appears to be a ritual burial. The pottery has been dated to the time just before Joshua’s conquest, affirming that women were present at Ai.

Joshua indicates that the Israelites burned three cities in Canaan: Hazor, Jericho, and Ai (Joshua 8:18–19).9 At Maqatir, we have found evidence for fire in the form of ash layers, heated (calcined) bedrock, burned stones, and “refired pottery.” Pottery from this time period was typically baked in a kiln. When pottery is exposed to intense heat for a second time—as would occur if the city went up in flames—it becomes extremely hard, like concrete. The ABR team has found such “refired” pottery from Joshua’s time in large quantities throughout the site.

The Byzantines (ca. AD 324–640) were famous for building churches and monasteries in places where they believed biblical events took place. On the top of the hill of Maqatir, there is a Byzantine monastery that was likely built to commemorate the momentous events of Joshua 7–8.10

These exciting geographical and archaeological discoveries affirm what the serious Christian already knows: the Bible can be trusted in every detail it records because it is the Word of the living God. We rejoice that He, in His sovereign providence, has allowed these ancient remains to be discovered and confirm the inerrant and infallible revelation of the incorruptible “I AM.”

ABR continues to excavate each year at Maqatir, uncovering more evidence as the Lord wills. Volunteers are welcome to join the excavations, and no experience is required. Visit www. Maqatir.com for details on how you can have a once-in-a-lifetime experience in Israel!

Henry B. Smith Jr. earned his MA degree in theology with an emphasis on apologetics from Trinity Seminary in Indiana. He is the Director of Development for the Associates for Biblical Research and is currently enrolled in the MAR program at Westminster Theological Seminary.
Previous Article Homeschooling—Beware the Roaring Lion Next Article Piggybacking Pollywogs