Image by Davidbena, via Wikimedia Commons 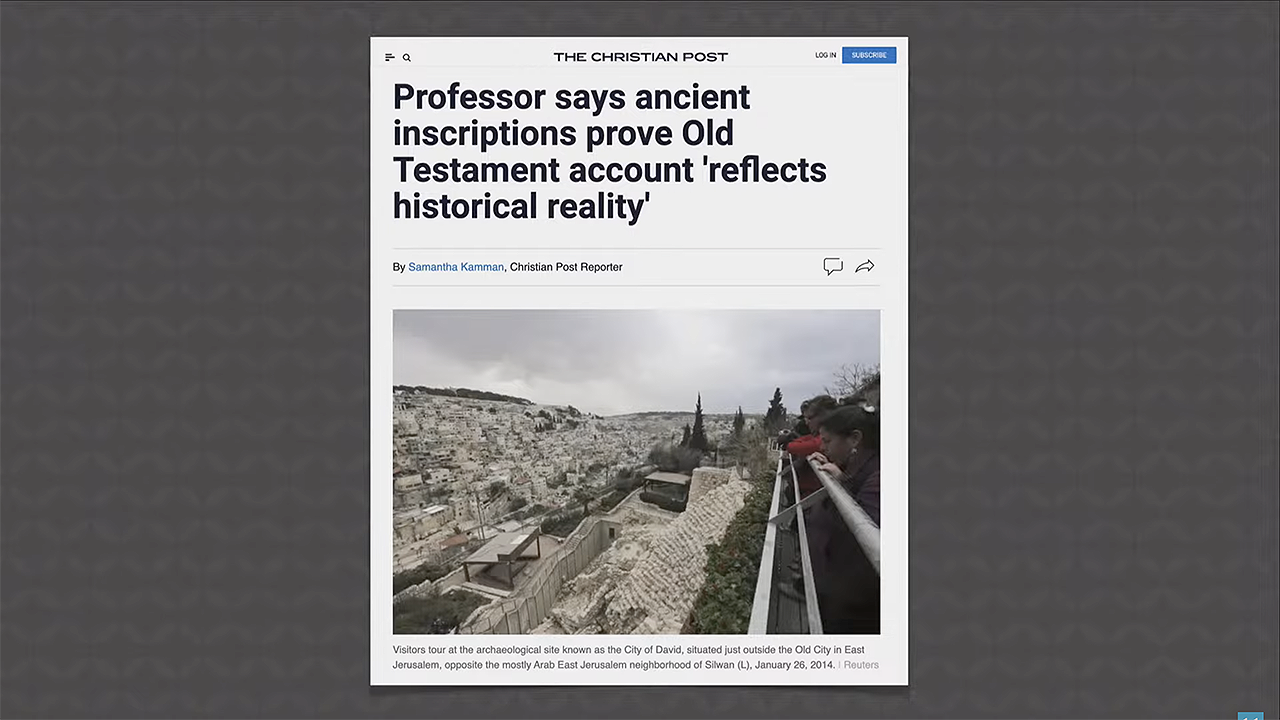 The Bible records real history. The people the Bible describes really lived. The events the Bible says happened really did happen, and the places the Bible highlights did exist. We know this because the Bible is more than just a historical document—it’s “God-breathed” and therefore free from error in everything, even the smallest details. And newly interpreted inscriptions, once again, confirm the accuracy of the Scriptures!

In 2007, archaeologists found an eighth-century BC inscription featuring the name of King Hezekiah, one of Judah’s good kings. Hezekiah reformed the nation and brought them back to worshipping the one true God.

Or recall that the Bible mentions that Sennacherib laid siege to the Judean city of Lachish and conquered it (2 Kings 18:13), was defeated in Jerusalem, and then was killed by his sons in the temple of his god (2 Kings 19:37). Both the siege of Lachish and Sennacherib’s death have been confirmed by archaeology.

In 2016, I blogged about the discovery of a tiny seal impression that read “Belonging to Hezekiah, [son of] Ahaz, king of Judah.” This seal was likely impressed into the clay by King Hezekiah himself!

And now, there’s yet another discovery: the palm-size limestone tablet found in 2007 that I referenced above, along with several other monumental, royal inscriptions, that one Israeli scholar is calling “one of the most important archaeological discoveries in Israel of all time.”

What did these inscriptions contain? The Jerusalem Post explains, “The inscriptions mention the name of Hezekiah, and summarize his main actions during the first 17 years of his reign, including the water project (the cutting of the Siloam Tunnel and the pool), the ritual reform, the conquest of Philistia and the accumulation of property.”

Why are these newly deciphered findings so important? One researcher explains,

This is an extremely important discovery that changes [some basic assumptions of] research, since until today it was commonly accepted that the kings of Israel and Judah, unlike the kings of the ancient Middle East, did not make themselves royal inscriptions and monuments . . . to commemorate their achievements. . . .

They also support the claim that scriptures in the Book of Kings are based on texts originating from chronicles and royal inscriptions and that the Bible reflects historical reality and not imagination.

The Bible is a book of history—really, it’s the history book of the universe!

Yes, indeed, the Bible does reflect historical reality and not imagination. As I’ve said for decades now, the Bible is a book of history—really, it’s the history book of the universe! Whether we’re reading Genesis, 1 and 2 Kings, or the Gospels, we can trust that the biblical writers accurately recorded the history God wanted us to know so we could understand the world around us and, more importantly, understand our sin problem and the only solution: the Savior promised, beginning in Genesis. And God in his grace and mercy allows us to find the archaeological evidence that continues to confirm his Word over and over again. Thank you, Lord, for these confirmations!

This item was discussed yesterday on Answers News with cohosts Dr. Georgia Purdom, Dr. Gabriela Haynes, and Roger Patterson. Answers News is our weekly news program filmed live before a studio audience here at the Creation Museum and broadcast on my Facebook page and the Answers in Genesis Facebook page. We also covered the following topics:

Watch the entire episode of Answers News for January 4, 2023.