Image for illustrative purposes; by wallyg, via Wikimedia Commons.

by Avery Foley on May 3, 2016
Share:
Email Using:
Gmail Yahoo! Outlook Other

When soldiers at a remote desert fortress in Judah penned their shopping lists (or, more accurately, their provisions lists) over 2,600 years ago, they probably did not think that archaeologists would be poring over their handwriting years later!

Using a computer algorithm, researchers from Tel Aviv University have been studying these ancient lists of military provisions written on pieces of pottery (called ostraca).1 By analyzing the handwriting, they were able to deduce that at least six individuals were involved in writing these inscriptions. The inscriptions themselves are rather mundane, merely featuring instructions on what supplies to send to a remote desert fortress; but the writing is accurate and well done. Much of the writing was penned by rather low-ranking officials, suggesting that even humble soldiers serving in a remote corner of the country could both read and write.

Scholars have long disputed the level of literacy among ancient Israelites. Many believe only the educated—scribes, priests, royalty, and the bureaucracy—were literate and that the general populace was unable to read and write. But Scripture implies that literacy would be a necessity, even among the general populace.

Scripture implies that literacy would be a necessity, even among the general populace.

Genesis 5:1 mentions the “book of the generations of Adam” (using the normal Hebrew word for book or scroll), suggesting that Adam was created with the ability not only to speak but also to write. It also seems reasonable that the genealogical information in Genesis 5 and 11 was also written down. And given that Noah and his family built the Ark, is it likely that they could not write? The Israelites were commanded to write the commands of the Lord on their doorposts and bind them on their hands and foreheads (Deuteronomy 6:4–9, 11:18–20). If they could not read or write, what would be the point of these commands? When Joshua prepared to allot the inheritance to seven of the Israelite tribes, he asked each tribe to send out three men to survey the land. These men “wrote the survey in a book” (Joshua 18:9); they could read and write. And in Joshua’s farewell address, he commanded the people to obey everything written in the Book of the Law of Moses, implying they could read (Joshua 23:6). When King Hezekiah made the decision that Israel and Judah would again keep the Passover, he sent letters across the land to inform the people. This would have been useless if they could not read his letter (2 Chronicles 30:1). Other passages also suggest literacy among the ancient Israelites (Judges 8:14; 2 Kings 17:37; Psalm 102:18; Habakkuk 2:2).

This question of literacy may seem mundane and unimportant, but it is actually a very important discussion. Many scholars have used the illiteracy argument (among many other presuppositions) to assume that the vast majority of biblical texts were not written until after the Babylonians destroyed Jerusalem in 586 BC. They claim that the Old Testament, with the exception of some form of the Pentateuch, could not have been written prior to the exile to Babylon because most of the Israelite population was illiterate. Therefore it must have been written after the Babylonians, and later Persians, educated the Israelites. 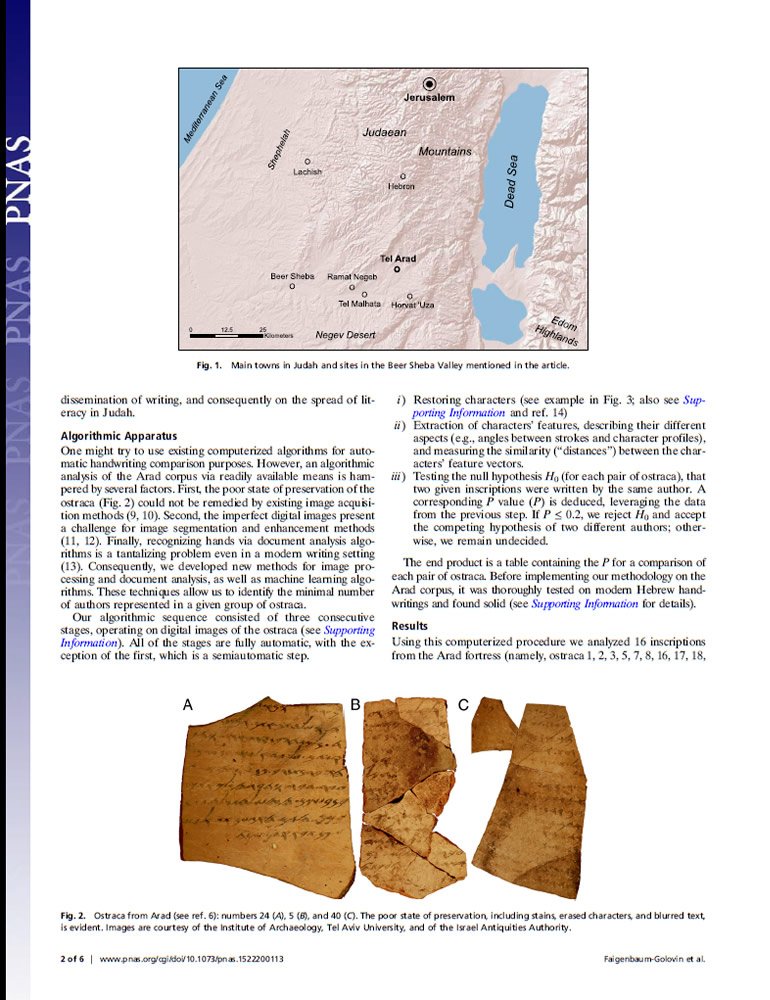 This late dating of the Old Testament texts clashes with the biblical testimony that many texts were written as history happened or even before the event (prophetic). Most conservative biblical scholars who start with God’s Word believe the Old Testament record that the books were written by the persons associated with them or those who claim to have written them. They also accept that these books were written during the time period they claim to have been written in (e.g., the prophet Isaiah during the reigns of the pre-exilic kings Uzziah, Jotham, Ahaz, and Hezekiah). If these books were not written until decades or even centuries after the events happened, the historicity, accuracy, and infallibility of the texts are called into question since they claim to have been written much earlier.

These ostraca researchers claim that their findings bear on the discussion of when the Old Testament books were written. They write, “However, widespread literacy offers a better background for the composition of ambitious works such as the Book of Deuteronomy and the history of Ancient Israel in the Books of Joshua to Kings.”2 They argue that, due to widespread literacy, many Old Testament books could have been written much earlier than is generally assumed by many liberal scholars.

This new study supports the accuracy of God’s Word. It demonstrates that Israel was more literate than many scholars believe. This means that prophets—even prophets who were common folk such as Amos, a shepherd (Amos 1:1)—could have been literate and able to pen their writings.

If history has taught anything, it’s that eventually research and science will confirm Scripture.

If history has taught anything, it’s that eventually research and science will confirm Scripture. We have an imperfect and incomplete understanding of history and science, but God’s Word was ultimately written by the God who was there and who never lies (Titus 1:2). Beginning with God’s Word, we have an accurate starting point for studying the world around us. When science or popular thought seems to contradict God’s Word, it is not God’s Word that needs modification, but rather our interpretations of the evidence.

The more we study the remains of lost civilizations, the more evidence will be found that, when properly understood, confirms God’s Word. As Christians, we can have full and utter confidence in the Word of our Lord.