What if you could go back in time to visit one of the first settlements after Babel? Well, it’s possible! In Turkey, archaeologists are unearthing an ancient town that was abandoned and frozen in time. Its unique wonders speak of mankind’s ageless ingenuity.

So-called “Stone Age” people were more sophisticated than you might think. They farmed, herded animals, manufactured tools, created art, and performed many of the same everyday tasks you do. They divided their time between rural, urban, and international activities as we do (well, except for the airplanes). 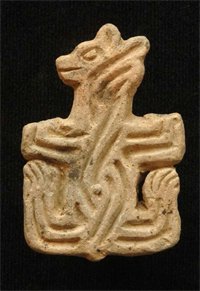 This clay stamp is thought to depict a bear.

But archaeologists did not always have this impressive picture. When James Mellaart stumbled upon a large, well-preserved settlement in Central Turkey—untouched by later occupants—nobody suspected what marvels awaited. Pristine sites are a rarity in the world of archaeology. Usually, ancient cities have multiple levels from different time periods, with each new layer demolishing the lower levels. This mound in Turkey was “Stone Age” from top to bottom. The period known as the Stone Age is so named because of the predominance of stone tools being used for everyday tasks. Metal artifacts have been discovered, but they are few and of a ceremonial nature. The pottery is crude, and there is no evidence of written documents.

It was a scene from the early years after Babel, frozen in time.

Perhaps the most surprising discovery was the settlement’s immense size—0.33 mile (0.5 km) in length and over 60 feet (18 m) tall at the crown. In time, archaeologists identified nearly two thousand dwellings from a period when most secular historians thought humans were still wandering around as bands of food gatherers.

Since we know that the Hittites ultimately ruled this part of the world, perhaps these were some of the first descendants of Canaan, the Hethites, who left Babel (Genesis 10:15). It appears that once their numbers had grown to sufficient size, they settled in this spot known today as Çatalhöyük (Turkish for “forked mound”).

A Nice Place to Live 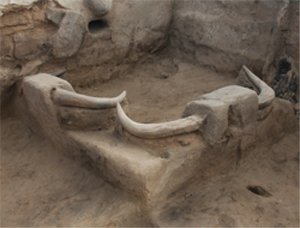 Bull images and bull horns are common throughout the houses.

What attracted them here? The Konya plain is the largest plain in Turkey. During the Ice Age in the years following the dispersion from Babel, it was covered by a massive inland lake. As the Ice Age ended, the lake dried up, leaving behind a thick layer of white marl. Rivers continued flowing into the plain, carrying fertile sediments from the nearby mountains and depositing them at the edge of the plain.

The founders built their homes along the fertile banks of the Carsamba River. Here the river flooded yearly and replenished the soil, much like the flooding of the Nile River. Mellaart discovered that the inhabitants of Çatalhöyük had learned to cultivate a wide variety of crops. In some houses he discovered stores of emmer and einkorn wheat. Evidence of peas and lentils, as well as domesticated and wild vetch, has also been discovered. They also gathered wild almonds, terebinth, hackberry, and acorns, as well as wild seed that could have been used for seasoning.

Although the river flooding turned the majority of the plain into a marsh, unsuitable for growing food, it did provide other benefits. The residents of Çatalhöyük dug pits to extract both clay and lime. They used the clay to build mud brick walls and simple pottery. Then they used the white marl to plaster their homes and paint them with interesting patterns and images.

The town of Çatalhöyük, located in southern Turkey, dates near the time of Babel. The houses were built next to each other without streets, and people entered through the roofs.

Perhaps most important was the access to raw obsidian in the nearby mountains. Until good sources of iron were discovered and smelting perfected in each culture, the people who left Babel depended on ready access to quality stones for cutting tools, and obsidian (black volcanic rock) is one of the best there is. It is easy to flake and keeps its sharp cutting edge indefinitely.

Nearly every house in Çatalhöyük contained a collection of obsidian flakes and blades, but that doesn’t tell us how important this resource really was. Using spectrography to identify what volcano the obsidian came from, it has been determined that nearly all the obsidian in all the older sites of Central Asia and the Middle East came from two volcanoes in Turkey.1 This means the residents of Çatalhöyük in south-central Turkey were likely trading with other cities as far away as Jericho, 1,000 miles (1,600 km) away.

Wild Life on the Frontier

Evidence of both sheep and goats has been found at the site. These domesticated animals were probably fed cereal fodder and grazed on wild grasses during the drier months. Remains of egg shells suggest that geese and ducks were the preferred fowl. However, it is unclear whether these animals were domesticated or simply gathered from the surrounding marsh.

Images of cattle appear on the plaster walls throughout the Çatalhöyük homes. Wall paintings indicate that these were most likely wild and hunted as part of a religious ritual. The skull cap and horns were removed, covered in plaster and mounted on the walls of homes. Sometimes two or three of these “bulcrania” were positioned one on top of another along the same wall.

Domesticated dogs also played a role at Çatalhöyük. However, these were not necessarily pets but rather hunting companions. Wall paintings show humans and canines engaged in hunting. No evidence has been found in the homes of the presence of dogs, but abandoned buildings seem to have been used to house them. 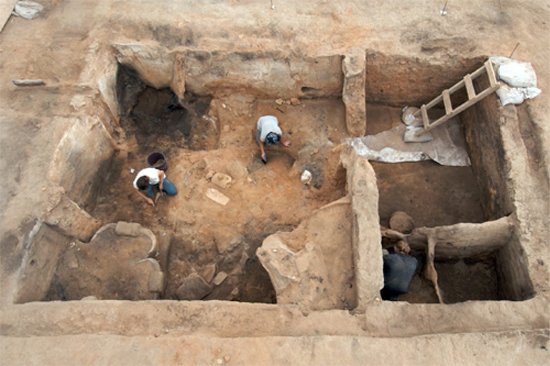 Each house contains a central room with smaller side rooms used for storage, domestic work, and rituals.

A City Without Streets

One of the most astonishing facts about the site is its apparent lack of public buildings, such as a palace, government offices, religious temples, granaries, and sanitation. In fact, there are virtually no streets. All the houses were connected wall-to-wall, and the only way to get into a home was through the roof.

Even though the population may have reached as high as 5,000–8,000 residents, we would not technically call this a “city.” It shows no evidence of the division of labor associated with a true city, or rich and poor districts. Life apparently centered on the house, and each family “did their own thing.”

All the houses were built on a similar plan. People entered through the roof by a set of steep stairs or ladders running down along a wall over the oven. This opening also served as the chimney.

Each house contains a central room, which is the common area apparently used for production and preparation of food and other tasks. Around that room are smaller rooms used for sleep, storage, and domestic and ritual purposes. These smaller side rooms could only be entered through a low, squat doorway. The rooms were furnished only with mats of differing sizes, shapes, and colors.

Each house was constructed out of oak or juniper timbers at the corners, and the intervening space filled with mud brick. The walls were then covered in plaster to create a smooth surface. Most houses have several layers: it seems that the inhabitants periodically knocked down the mud walls and rebuilt a new home on top of them, reusing the precious wooden posts.

The Çatalhöyük house was the center for family life from birth to death. Burials were common in every house, with remains being buried beneath the floor of the main room. Human remains from children to older adults have been uncovered—with one house divulging nearly 70 bodies. Infants were treated with special care, being buried in baskets and often adorned with jewelry. 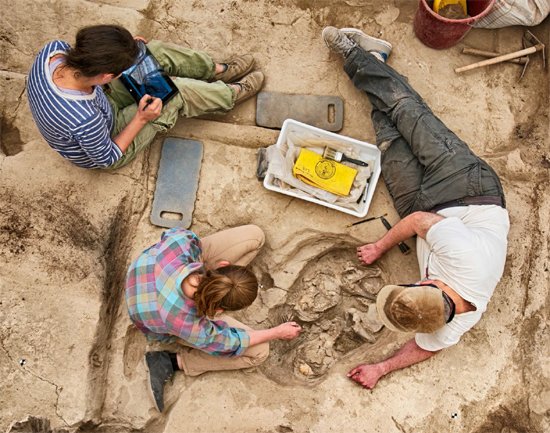 People were typically buried beneath the floor of the main room in each house. 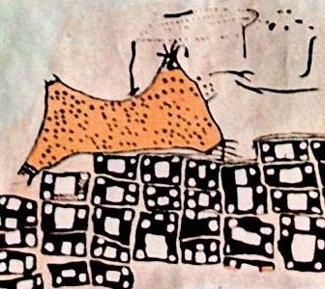 One wall painting appears to show an erupting volcano, which art historians have dubbed “the first landscape.”

If life was so good, why did everyone abandon Çatalhöyük? It appears that changing environmental conditions made the region unlivable for a time. The plain is located at a high elevation (about 3,000 feet [900 m] above sea level) and separated from access to the ocean. Rainfall was also low. Charcoal evidence suggests that changing climate dried out the region, and people increasingly cut down scarce oak wood for fuel until the forests on the mountains were depleted.

A reminder of the difficult local conditions was possibly recorded for us by a resident. On one wall is what appears to be a picture of an erupting volcano, thought to be Hasan Dag (Mt. Hasan), around 87 miles (140 km) away. Art historians have dubbed the painting “the first landscape.”2 This volcano, now silent, was active during the period of Çatalhöyük’s occupation.

We may never be sure exactly what happened, but who knows what new clues await? The work of James Mellaart, who excavated from 1961–1965, continues today under Ian Hodder. It is an exciting time to be alive, as the history of the people who scattered from Babel is still being pieced together, including the amazing people of Çatalhöyük.

David B. Smith holds a master of divinity degree from The Southern Baptist Theological Seminary, and a master of arts degree in Bible and cognate studies from Hebrew Union College—Jewish Institute of Religion where he studied archaeology and ancient Near Eastern history.
Previous Article Creation on Display Next Article The Miracle Tree