Seeing the Glory of God in Scallop Eyes

When the James Webb Space Telescope launches into orbit next year, it will use an array of mirrors to gather light from far away galaxies. Though this model was developed in the 1980s, scientists only recently discovered a similar design already in use in the eye of a humble sea creature, the scallop. That’s right—in 2019 we will be able to see distant galaxies the way a scallop might see them.

When you think of scallops, you probably picture glistening white, pan-seared medallions of delicate meat resting in a pool of butter sauce. But the part of the scallop served on your plate at the seafood restaurant is only the adductor muscle that closes and opens the scallop’s shell. If you could look closely at a live scallop, you’d see its shell frilled with tentacles and a layer of flesh on the inside rim, edged with little dots—its eyes. 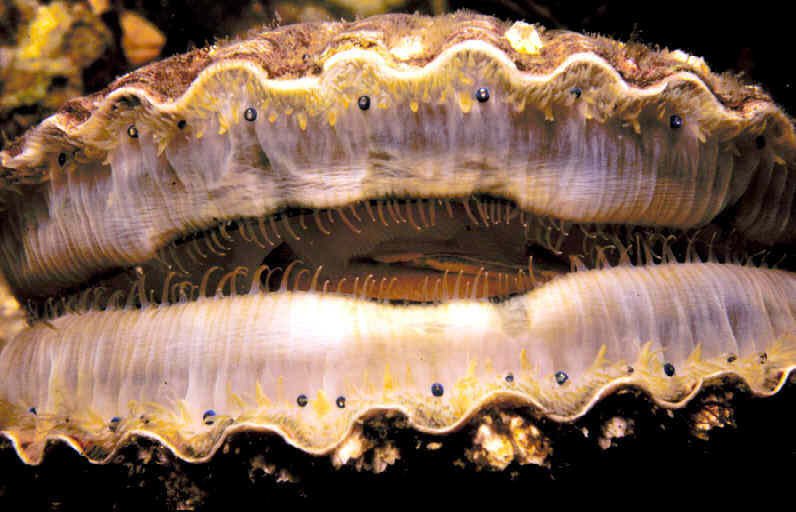 Some species possess up to 200 peepers, mostly neon blue ones! In each eye, light passes through a lens and two retinas on top of each other before reaching a curved “mirror” in the back of the eye and reflecting back to the retinas. Rather than the lens, this “mirror” focuses the light the same way the segmented telescopes do.

In the late 1960s, a University of Sussex scientist discovered that the “mirror” in each eye was constructed of layered crystals, suggesting they were made of guanine, a DNA building block. However, not until recently when scientists eyeballed these eyeballs with newer techniques did they find that the guanine crystals are flat, square, and only a millionth of a meter wide. These crystals fit together in a grid with 20 and 30 grids stacked on each other and liquid filling the gaps between them. The exacting distance between the crystals and their gaps allows the mirror as a whole to reflect blue-green light, the overall color of the scallop’s environment, perhaps allowing the scallop to view a wider area for food or predators.

But that’s not all they discovered! Guanine crystals normally grow in prisms, not flat squares, indicating that the scallop shapes these crystals as they grow and form. Furthermore, according to an article in the Atlantic, scientists believe the scallop’s eye cells control “the growth of the crystals inside them, but they also have to communicate with each other to arrange themselves just so.”1

And add to this the discovery that the mirror is tilted just a bit relative to the retinas, projecting “light from the center of the animal’s visual field onto the upper retina, and light from the periphery onto the lower one.” Scientists believe that these two retinas allow the scallop to “focus on different parts of its surrounding at once.”

The whole structure is a master class in precision engineering.

In short, it’s the kind of complex design that appeals to rocket scientists and telescope designers. In fact, the Atlantic article gushes, “The whole structure is a master class in precision engineering.”

Yet Alison Sweeney, a University of Pennsylvania physicist who studies animal sight, said, “When there is an elegant physical solution, the evolutionary process is very good at finding it.”

And in a short video embedded in the article, Atlantic science writer Ed Yong says,

“Animal eyes come in the most spectacular range of styles, shapes, and sizes. . . . Which animal has the most incredible eyes? Well, in a way, they all do. Each eye is exquisitely tuned to the needs of its owners and together they show evolution at its most flamboyant and wondrous. All we need to do is look.”

Remarkably, scientists still give credit to evolution for the scallop’s incredible eye. But random chance and natural processes over millions of years could not possibly be responsible for a design so precise and seamless.

We know that on Day Five of Creation Week, God created all the creatures in the sea, including the scallop kind (Pectinidae). God’s creation is a constant study of intense attention to detail—a nesting doll of intricacy.

Perhaps the most amazing part of this story is how close evolutionists come to the truth, while still missing it completely. They are looking, but they are not seeing, even though the Creator has made his existence abundantly evident.

For what can be known about God is plain to them, because God has shown it to them. For his invisible attributes, namely, his eternal power and divine nature, have been clearly perceived, ever since the creation of the world, in the things that have been made. So they are without excuse. For although they knew God, they did not honor him as God or give thanks to him, but they became futile in their thinking, and their foolish hearts were darkened. Claiming to be wise, they became fools, and exchanged the glory of the immortal God for images resembling mortal man and birds and animals and creeping things. (Romans 1:19–22)

Scallop eyes certainly reveal our flamboyant and wonderful Creator, and testify of his glory. As Yong said, “All we need to do is look.”