One of the ocean’s most beautiful creatures is also one of the deadliest.

Peacock mantis shrimp stun everything they encounter—in more than one way. A diver might be awed by the crustaceans’ dazzling colors, but if he reaches out to grab one of these seemingly harmless critters, he’ll be countered by powerful, lightning-fast punches. With their impressive brawn, peacock mantis shrimp thrive as some of the deadliest predators on the Indo-Pacific coral reefs.

Peacock mantis shrimp are not shrimp or mantids, but because they physically resemble both, the name has stuck. They are actually from an entirely different order, Stomatopoda, which means “mouth foot” since their gills are located on their abdomens instead of near their heads like most aquatic life. However, they are very similar to shrimp and all other crustaceans created on day five of creation week (Genesis 1:20–23).

Before the fall, mantis shrimp ate plants like every other animal (Genesis 1:29). Today, these tiny two-to-seven-inch crustaceans are ambush predators. They often avoid attacking creatures their own size, preferring to prey on much larger snails, crabs, and mollusks. But since their preferred prey are usually protected by hard outer shells, how do these scrappy sea creatures grab their dinner? 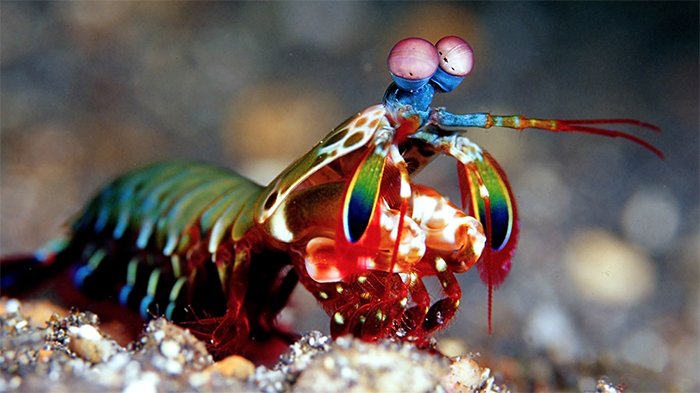 Named for their exceptional colors, peacock mantis shrimp deliver punches at speeds so fast that they heat the surrounding water to temperatures nearly matching the sun.

Peacock mantis shrimp have two arms called dactyl clubs on the front of their bodies. They use these clubs like boxing gloves to smash the shells of their prey. The clubs are launched at 50 mph and accelerate faster than a .22 caliber bullet. With only one-tenth of that speed, humans could throw baseballs into orbit!

In 0.003 seconds, peacock mantis shrimp strike objects with 340 pounds of force. That’s nearly the same force a karate expert uses to break a slab of concrete! In the wake of their punches, the surrounding water temporarily boils. When the bubbles collapse, they produce tiny pinpricks of light as well as shockwaves that momentarily heat the surrounding water to nearly the temperature of the sun’s surface—10,000°F! These shockwaves can kill the prey even if the mantis shrimp miss their target. (For more, check out sonoluminescence cavitation online.)

How do peacock mantis shrimp avoid injuring themselves with the force of their own punches? Their appendages have several layers of protection: a hard, ceramic-like outside shell, and several soft, elastic inside layers stacked like corkscrews. The inner layers absorb the shock from the punches, preventing fractures or breaks. This resilient design works so well that researchers hope to mimic it in a new carbon fiber material used to strengthen aircraft and automotive panels, athletic helmets, and even military combat armor.

Hammering Out a Living

The same force that feeds peacock mantis shrimp also creates their habitats. With their clubs, they smash rocks and demolish reefs to construct burrows. Not surprisingly, they can also break glass with little effort, which is why they rarely appear in aquariums despite their beauty. If they are displayed, they must be kept in shatterproof acrylic tanks—alone. These ruthless, territorial predators don’t play well with other creatures.

Peacock mantis shrimp can easily crush the skulls of predatory fish and even break human fingers. However, to defend their burrows against rival mantis shrimp, they will first wave their clubs to appear large and intimidating. If their opponents refuse to back down, they resort to fighting.

Instead of punching each other in the face, these feisty fighters curl their tails forward and allow their opponents to strike their backs on special plates called telsons. These telsons act like punching bags by dissipating up to 70% of each strike’s impact. Since they can’t truly harm each other, the shrimp with the most endurance wins while the loser scurries away to fight another day.

The beauty and brawn of peacock mantis shrimp display God’s exquisite handiwork in the animal kingdom. Although they use their powerful clubs for hunting, peacock mantis shrimp also thrive by using their clubs to create shelter and defend themselves. Their fierce predatory nature is a result of the fall, but the Creator’s amazing design still shines through in these tiny—but tough—underwater beauties. 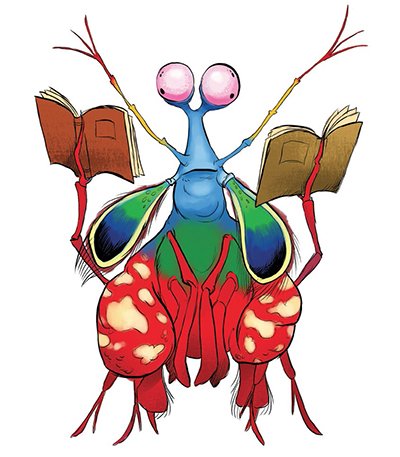 The eyes of peacock mantis shrimp can move independently, allowing them to see in two different directions at once.

Peacock mantis shrimp have some of the most complex eyes in the entire animal kingdom. Their eyes contain millions of light-sensitive cells called rods and cones, which provide color vision. Humans have only three types of cones: red, green, and blue. Peacock mantis shrimp, however, have up to 16 types of cones. This means they can detect some color differences quicker than we can.

Polarized light reflects differently from cancerous and healthy tissues. Because peacock mantis shrimp can see polarized light, scientists are studying their eyes in an attempt to create small cameras to identify cancer cells through polarized light. This kind of early detection could save countless lives.

Mantis shrimp can throw the fastest punch of any animal. They can launch their specialized dactyl clubs at a speed of 50 mph and accelerate faster than a .22 caliber bullet. 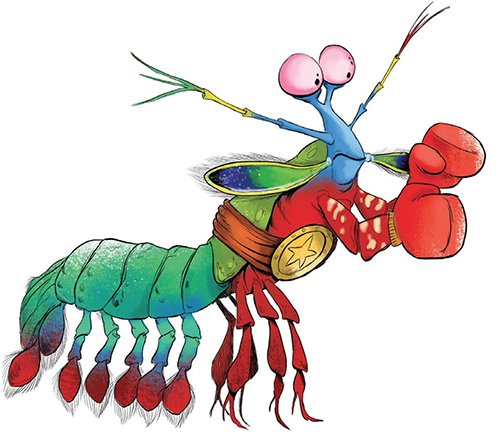 Karina Altman has a BS in marine biology from Texas A&M University at Galveston. She has been involved in zookeeping since 2007. She is currently a zookeeper at the Creation Museum’s Eden Animal Experience.

How Did Defense/Attack Structures Come About?

Next Article Tree Squirrels—Method to the Madness