Sure, There Are Some Similarities—But Do They Really Share an Ancient Aunt?

One cruises through the water like a heat-seeking missile, the other swims gracefully like a giant bird in slow motion. They are the shark and the ray.

The class they share is called Chondrichthyes because their skeletons are made of cartilage, not bone (Greek chondros = cartilage, ichthys = fish). 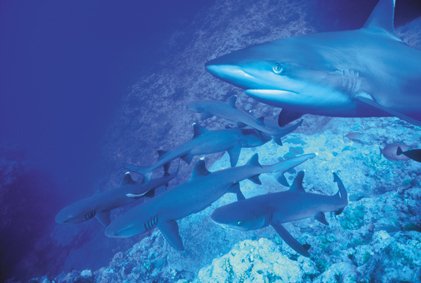 Aside from their skeletons, the members of the Chondrichthyes class also share other physiological and biochemical “peculiarities.” In many species the young hatch from eggs inside the female body and are “born” alive. Also, they use a unique method of retaining the chemical urea in order to maintain the internal balance of body chemicals in their salty environment.1

This is why many evolutionary biologists claim the two types of marine creatures evolved from a common (i.e. the same) ancestor that had all those features. However, there are also many differences that continue to cause problems for this view. Aside from the obvious differences in appearance between sharks and rays, they also use different methods to breathe, and different ways of moving through the water.

The shark breathes by drawing in water through its mouth, passing it over the gills and ejecting it through slits. But this method wouldn’t work for rays, because many are bottom-dwellers and they would end up drawing in water full of sand, mud and grit. Instead, rays have an opening (called a spiracle) behind each eye on the top of their head, which draws in clean water and takes it straight to the gills. It is then ejected through gill-slits on the ray’s underside.2

The sting in the tail

The issue of a common ancestor for sharks and rays becomes even more complicated when the variations between their own species are considered. (There are 200 to 250 species of sharks and 300 to 340 species of rays.5)

Sharks come in all shapes and sizes, and all have incredible design features suiting their diet and environment. Those that feed near the surface, like the Mako and Thresher Sharks, are beautifully streamlined and powerful swimmers, allowing them to catch and feed on fast tuna and marlin. Bottom-feeding shark species are stout, blunt-headed and more sluggish, while shellfish-eaters have coarse, pavement-like crushing teeth.6

Rays are typically categorized as either electric rays, sawfishes, skates, or as members of one of the various families that have slender, whip-like tails equipped with spines (generally referred to as “stingrays”). Some have scales like a shark, some do not. Some give birth to live young, some do not.

Rays have flattened disk-like bodies with five gill exit openings and their mouth generally located on their underside. They have large pectoral fins, which they move like wings to travel in the water, and their tails are generally long and slender, with many species having one or more sharp, venomous spines that can be used to inflict painful wounds. Rays range in width from 25 cm (10 in) in the north-western Atlantic species to 2 m (7 ft)—and up to 4 m in length—in Australian species.7

Some rays are bottom-dwellers, like the stingray. These rays often lie partially buried in the shallows, eating worms, mollusks and other invertebrates.8 Others use their broad pectoral fins to dig shellfish from the sand or mud.9

Manta Rays, on the other hand, swim near the surface. Mantas are the largest of all rays and use a very distinctive “flapping” motion to swim. They are known to leap clear out of the water—possibly to remove parasites, or just for fun.10 They feed by moving through masses of macroplankton or schools of small fish, turning slowly from side to side and using their prominent front “cephalic” fins to fan prey into their broad mouth.11

One of the most amazing species of ray is the Electric Ray (also called “torpedo”), which has large paired electric organs between its pectoral fins and its head, used to give a powerful shock for either defensive purposes or to kill prey.

This is an incredibly complex design feature. It involves delivery of electricity by timing the nervous impulses that activate individual cells capable of producing electrical currents (called electroplaques).13 The Electric Ray is a bottom-dweller that feeds on invertebrates and fish. With its widely extensible jaws, combined with its electricity, this typically sluggish ray is able to catch very active fish such as flounder, eel, salmon and dog-fish.14

Interestingly, the ancient Greeks and Romans used the electric shock of this particular ray to treat diseases of the spleen, chronic headaches and gout. The word “narcotic,” used to describe powerful pain-relievers, comes from the Greek word for Electric Ray, narke.15

The discovery of a new type of deep-water ray, Hexatrygon bickelli, off the coast of South Africa in 1981, indicated the possible existence of another entire stingray family. The specimen possessed unique design features suited to deep-water life, and was classified by its discoverers in a separate family and suborder. If such a totally new category is confirmed, it will cause even more complications for those trying to determine an evolutionary history for the ray.

Because rays and sharks are cartilaginous fishes, their skeletons do not generally fossilize in the same way as those of bony fishes. However, their teeth and scales have fossilized, and those in the fossil record tend to indicate that the “ancient” ancestors of the cartilaginous fishes were little different from those of today.16

Evolutionists have no idea how sharks and rays evolved, either in their own class or in the broader scheme of marine evolution. They say bony and cartilaginous fishes evolved independently, “although the lines of evolution remain to be discovered.”17 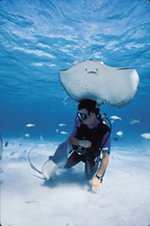 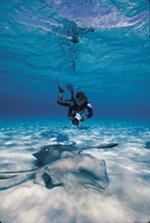 Even the relationship between members of the Chondrichthyes class is not without ongoing debate. The New Encyclopaedia Britannica admits that the relationship of sharks, rays and chimaeras (see description below) is subject to “varying interpretation”:

“Although both groups have many characteristics in common, such as the possession of a cartilaginous skeleton … the two groups may have evolved independently along parallel lines … .”18

This idea of “parallel evolution” is often invoked by evolutionists to explain amazing similarities which, for other reasons, could not have come about through sharing a common ancestor. The obvious explanation for such similarities, design by the same Designer, is “not allowed.”

However, it is difficult enough to accept that, through blind chance filtered by selection (ultimately in a chance succession of environments), a species could develop specialized features such as a skeleton of cartilage and the ability for young to hatch from eggs inside the female’s body.

The concept that such features could independently evolve in species with no connection to each other—again relying on blind chance—is not only illogical, but without evidence.

Evolution-believers try to have it “both ways”—shared design features are used to “prove” common descent, but when this doesn’t work for other reasons, why, there is always “parallel evolution” to fall back on.

The alternative explanation, that they were created as fully-formed, separate kinds by God, seems a much more reasonable one. Although we do not know for sure how many kinds of each were initially created (perhaps only a very few, with great variety possible within each kind, as seen in other organisms), the creation explanation is consistent with the evidence.